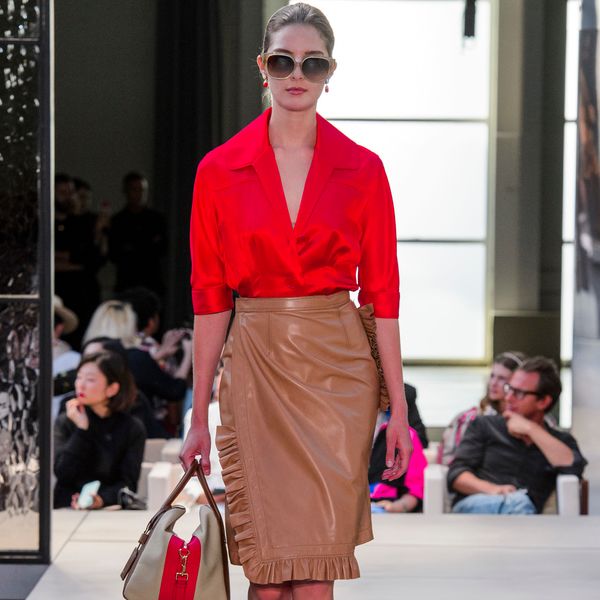 Riccardo Tisci has finally made his highly-anticipated Burberry debut. The designer's inaugural collection, titled "Kingdom," reflects on the start of his career in London 20 years ago (when he showed his thesis collection at Central Saint Martins) and the mix of casual and refined dressing that defines British style. The predominantly caramel, steel gray, black, and white collection was punctuated by Tisci's favorite shade of poppy red.

Let There Be Light

Under the label's previous Chief Creative Officer Christopher Bailey, Burberry transitioned to a see-now-buy-now schedule. It's now in nebulous retail territory, as a limited range of pieces from the collection are shoppable via Burberry's Instagram account for 24 hours only.

Why Did They Kill Bambi?

On September 6, Burberry announced that it was no longer using fur. In a tongue-in-cheek move Tisci used ermine, leopard, Dalmatian, swakara, and cow-hide prints in his collection. Particularly cheeky was a shirt emblazoned with the words "Why Did They Kill Bambi" and covered in a spotted buckskin print.

Nodding to his London return, Tisci turned foil-stamped maroon wallets that look like the pre-Brexit U.K. passport (ones issued post-Brexit are blue) into pendants by attaching them to lanyards and chains slung around models' necks. Instead of the word passport, the phrase "pastfuture" appears on the billfolds.

Among the collection's fisherman sandals, lace-up oxfords, and sneakers, were pumps and booties with tiny peep-toe cutouts that expose a curiously small bit of toe cleavage.