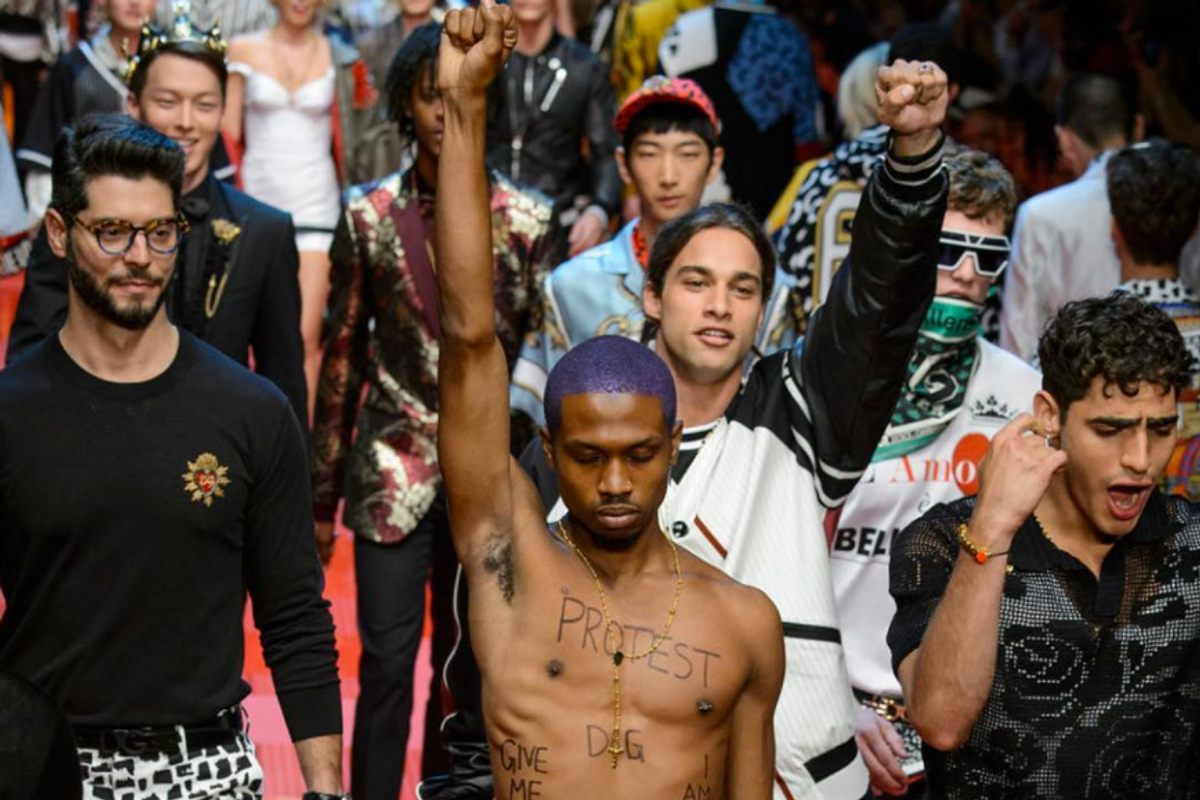 Looks like things didn't go exactly as planned for the Trump normalizers over at Dolce and Gabbana this Milan Men's Week, when Atlanta rapper, Raury, staged a protest against the brand right on their very. own. runway. Raury, who was hired as an influencer model for their SS18 menswear show, took offense when he saw D&G's satirical new "Boycott Dolce & Gabbana" campaign, which was created to mock the outrage against their decision to dress Melania Trump.

At the finale of the show, Raury came out onstage and removed his hoodie, revealing the words, PROTEST, I AM NOT YOUR SCAPEGOAT, and DG GIVE ME FREEDOM written on his chest. He was quickly ushered offstage, and footage of the incident was scrubbed from their documentation of the show. In an interview with GQ, Raury explained his motivation for the protest:


The "Boycott Dolce & Gabbana" T-shirt they created completely makes a mockery of what "boycotting" is. Boycotting is the people's voice. A protest is the people's voice. It has power. It changes things. [...] Me, as a young man from Stone Mountain, Georgia, the birthplace of the Klu Klux Klan, I really felt this mockery of boycotting. Who knows, if boycotts didn't happen, if Rosa Parks and M.L.K. didn't step up…who knows if I would even exist. Boycotting matters. Boycotting is real. Dolce's entire campaign says it's not real. I know that if I walk out there and support or endorse anything that sits next to Trump—or support someone who even makes dinner for Trump or whatever—then that means that I support Trump also. I don't support Trump. So I'm trapped, and I have to let people know that I don't support Trump and I don't support those who are trying to undermine the voice of the people.

But why walk in the show at all if you stand against their politics? Raury explained that he only found out about the "Boycott" campaign the day before the show, when he Googled the brand so he could be sure he knew which designer was which. He quickly became upset, realizing that he was being used:

I wondered why I was picked to come out here and support them in a time when they're going through some heat. So here I am, about to be like, Dolce & Gabbana is cool, but I didn't know what they had done. And a lot of [models in the runway show] didn't know what they had done. I felt like Dolce & Gabbana was literally trying to use the youth to wash their hands of any sort of heat from anyone who wants to protest against them.

Yes, of course Raury could have found all of this out before he agreed to get into a business relationship with a brand that has a florid history of saying and doing terrible things, but you gotta admire a man that stands behind his principles.

RAURY on Instagram: “I never felt so alone, so terrified, yet so alive... Found myself in tears when I realized the people understood, and I'm not just…”