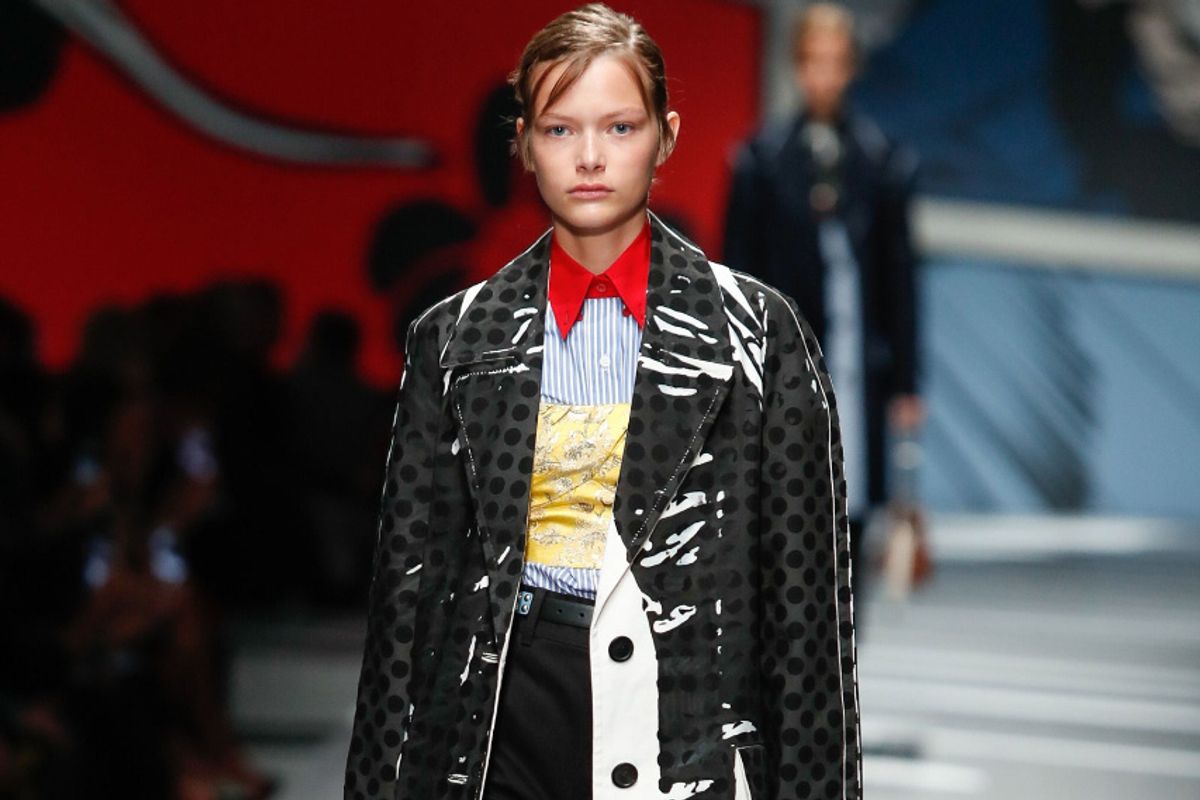 Amid an installation of gigantic comic book heroines (was that Angela Davis in her signature wire rimmed specs sketched over the crowd?) collaged around the Prada showspace in Milan, Mrs. Prada sent out a collection for the Ghost World set this afternoon in an exuberant mash up of prints, leathers, studs and scrunched up trenches. The clear starting point was the energy and uber-clash aesthetic of graphic novels and comic books in a show that skewed decidedly younger. If anything it harkened back to her Girl Power show of Spring 2014, with the breakout Work Bitch by Brit Brit, though this time more contemplative and interior. That is not a negative critique, as who better to reference their own library than Miuccia, and it lends a certain consistency to the brand known for its compelling, if sometimes jarring, 180-degree turns each season.

This collection took the technique of comic drawing and rendered it in 2-D shading and highlights on jackets and dresses, a clever device which immediately drew a visual comparison to, among other things, the iconic 80s video "Take On Me" by cult Norwegian band A-ha. Which brings us to a larger 80s tone to the show. I can not recall a tiger or leopard print jacket on a Prada runway in recent memory, or perhaps ever, which signals interesting new territory for her. I will also admit to seeing a bit of Pretty in Pink's Duckie Dale and Ferris Bueller's signature knit waistcoat, but perhaps that is wishful thinking on a full 80s Prada moment. Also, knowing her affinity for David Lynch, there was a little bit of Wild At Heart thrown in as well. The decade was also piped through the speakers as Suzanne Vega and Sinead O'Connor classics were mixed with isolated vocals of Lana Del Rey and Moby beats. But for a show recalling so much of something three decades ago, it seemed to play to an audience who was likely not even born yet. There was also an element of dress-up play; frocks thrown over shrifts and sweaters, baby doll dresses in mismatch patterns. It was as though a teenage girl was going through her mom's 80s wardrobe and thinking, this is fab. Something you might imagine Kaia Gerber, who walked in the show, doing with her own supermodel mother's no doubt bounteous neon and leopard-print vintage pieces.

The Prada woman of the last 30 years has been an avatar of modernity and pathos with varying degrees of success but you could always count on her to make you think. This Prada woman of 2018 is either one who is just on the verge of experience, creating a world in her mind and her wardrobe through comics, or perhaps one who has retreated from the world after a period in it, and drawing up her own story line of heroines and dreams. It's a canny move to reach for a younger audience as the Prada brand experiences somewhat of a correction; less than stellar bottom lines and a highly publicized tax investigation have placed the brand in recent quarters. Earlier this year they announced Prada365, which was a more comprehensive marketing and ad strategy that made their campaigns less focussed on the abstract and esoteric in their message but the "human things." In other words, that Prada needed to start selling more things than just ideas and notions about fashion. And within the Spring 2018 offering there were plenty of things to schill; boldly drawn handbags, crystalized sandals, fabulous costume jewelry (a Prada staple), and studded leather jackets to start. Though those jackets may be a challenge for someone born before 1987, that is hopefully where the action, and money, is.

See all of the looks from Prada's Spring 2018 show below.