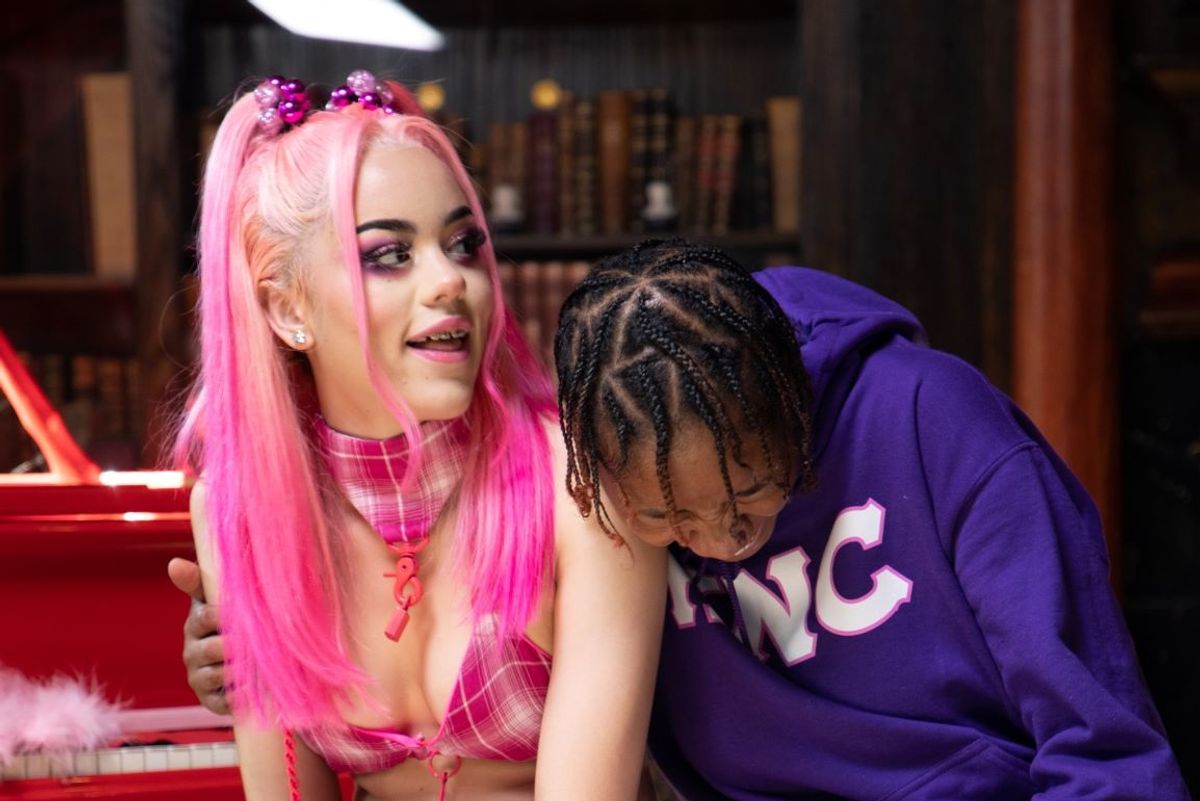 "Trap! Bunnie! Bubbles!" Since the height of coronavirus quarantine back in the spring, that elastic, animated squeal has greeted millions of TikTok users. Whether it's "I wanna live in that mansion, Playboy Bunny what's happenin'?" or "Bitch, did you hear what the fuck I said? Shake some ass!," at some point you've probably heard ppcocaine's audacious voice and sexually charged proclamations blasting through your phone's speaker while scrolling on the video-sharing app.

Perhaps more than any other viral artist, the energetic 19-year-old rapper is an omnipresent force on TikTok — especially if your FYP falls on the alt or queer side. With her explicit lesbian anthems, inimitable raspy vocal delivery and cult status among fans (AKA trap bunnies), ppcocaine is the brat rap princess of TikTok music trends. She's amassed 70 million Spotify streams to date, and her music has soundtracked videos from top creators like Xowie Jones and Addison Rae. Her ascent to viral stardom unfurled quickly, but the journey was far from easy street.

Less than a year ago, Lilliane Diomi was homeless. After graduating high school in 2019, she started working as a dancer in a strip club on her 18th birthday, something she had wanted to do after training in ballet, hip-hop, ballroom and other dance styles as a kid. When her grandparents, who she lived with at the time, kicked her out for unrelated reasons, the Los Angeles-based rapper began sleeping on park benches and crashing on couches, sometimes even going home with new friends or clients she'd meet during her shift. Typically dancing from noon to 4 AM, she'd often shower and get dressed at the club, sometimes pulling all-nighters. Though she was making money and loved the gig, as a new dancer the cash flow was hardly stable enough to build a foundation on.

"The reason I'm so open about being homeless is 'cause anyone can go through that," Diomi shares. "At the end of the day, your home is never a guarantee. People take a lot of shit for granted." Being homeless, she says, is not necessarily about living on the streets, so much as not knowing where you live. "It doesn't just affect you physically because you have nowhere to stay; it affects you mentally. When you're worried the whole day about where you're gonna sleep, it stops you from making money because all you're thinking about is, 'Oh my God, where am I gonna stay tonight?'"

The stress of uncertainty and the trauma of not having somewhere stable to live can "make you resort to things that aren't the best for you." She eventually turned to drugs such as MDMA and LSD to help her stay up through the night. Life became a blur and Diomi was stuck in a cycle: "It's traumatizing all the way around. It makes everything harder for you."

In late 2019, a chance meeting changed Diomi's course into something more akin to a Cinderella story. While attending a party with a friend after a club shift one night, she met an emerging rapper named NextYoungin, AKA Daddy Kaine. The two hit became instant best friends. The following day, Diomi moved into NextYoungin's apartment.

"When I meet people, I'm able to tell exactly if they're gonna stay in my life. With her, it was an immediate connection," she gushes. "I didn't feel like nothing would ever go wrong. I wanted to be in her life and I wanted her to be in mine. You know how people have soulmates that aren't necessarily romantic? That's how we are."

A self-described "depressed teenager" with a complicated home-family dynamic, Diomi spent her youth writing angsty poetry about "her friends being assholes" and listening to Pussycat Dolls and Tila Tequila songs on her mom's mp3 player. While she enjoyed singing growing up, becoming a musician was never her intention. Her plan was ultimately to work in fashion; she hoped to create an inclusive lingerie line that would "beat out Victoria's Secret" and provide sexy, empowering styles catered to alt-girls of all sizes.

Related | @Ghosthoney's TikTok's Will Heal Us All

Through NextYoungin, however, she connected with a producer named SpainDaGoat. The first time they met, he played a beat and asked her to rap over it. What came out of her mouth — a spunky, high-pitched voice you'd hear from a bouncy, wide-eyed Saturday morning cartoon character — wasn't planned. It would nevertheless become her calling card.

"It was really on the spot," Diomi admits about how she discovered her distinctive vocal style. "I didn't practice that or nothing. My talking voice is so different from my rapping voice. It's something like you would hear in a cartoon. I decided to take that and roll with it." In December 2019, Diomi — going by "trapbunniebubbles" at the time, hence the frequent shout-out in her discography — and SpainDaGoat officially started making music together. A few months later, in May and June, she began uploading the songs on TikTok during the height of quarantine, which is how her music "really started to blow up" online.

Over the summer, brief snippets from her songs "3 Musketeers," "DDLG," "PJ," and an unreleased track called "For That Cash" went wildly viral on the app. Suddenly, Diomi's playful voice (described as sounding like "Vicky from The Fairly OddParents," according to one observant YouTuber) and braggadocious bars were inescapable — and contagious, as users began using the tracks to create various video trends. "3 Musketeers" in particular became a huge hit, spawning a choreographed dance trend even Charli D'Amelio participated in. An official music video featuring a naughty sorority theme and starring cult TikTok stars such as Moop and Quenlin Blackwell was released in September.

With viral fame comes the inevitable increased scrutiny. Within months of breaking out, Diomi has found herself "canceled" more than a few times. In one instance, she was called out after accidentally misgendering another TikTok user during an argument in her comments. She says she immediately apologized to the user, both publicly and privately, and insists that the incident was the byproduct of growing up in an "LGBTQ-phobic household," where she didn't even know "pronouns were a thing."

"I was accused of being transphobic, and there was a reason for that," she admits. "Because I was in an argument, it was very heated, and the way I said it, it sounded like I intentionally misgendered them. It was a lack of paying attention on my part, because I didn't read their bio. I didn't know anything about that. My grandparents once unfriended someone when they came out as trans, so I wasn't able to learn about any of that stuff. For me, now, I'm taking the initiative to learn, because I wasn't allowed to learn about it before."

Even Diomi's music itself is not without controversy. "Another misconception is people think I'm a pedophile because I titled one of my songs 'DDLG,'" she shares, sounding frustrated. The track, titled after the daddy dom/little girl kink, spawned a popular TikTok trend about thirsting after a crush thanks to its lyric, "For you, haha, I might let you hit it for free / For you (I probably shouldn't though), I might let you hit it for free." The rapper reveals an ex-girlfriend introduced her to the kink, but that she interprets it as "wanting to be babied and calling someone Daddy, not walking around the house in diapers or fucking drinking out of sippy cups."

Whether it's warranted criticism or blatant cyberbullying, near-constant backlash can be difficult to navigate. For Diomi, it's resulted in the occasional social media break or tongue-in-cheek clap back. "Everything that they say about me are things I've already said to myself and stuff I've already hated myself for," she shares. "I already felt all this pain. You guys telling me to kill myself? I already tried it. It didn't work, so clearly, I'm supposed to be here. I don't take no offense to it anymore, but right now, I'm still not as confident as I can be, so sometimes the hate comments do get to me." Thankfully, she has a strong shoulder to lean on at home: "At the end of the day, I have Daddy Kaine. She makes me feel better."

In fact, Diomi largely attributes her success to her best friend. She's adamant about giving credit where it's due, often taking to the comment section of her social media accounts to set fans and haters alike straight whenever they question NextYoungin's presence in her life and content.

"People constantly tell her, 'Oh, you're leeching off of PPC. You're using her.' But they don't even know the whole story," she explains. "She took me in. She introduced me to her producer, she introduced me to her manager. I didn't have anything. I just had my poems and I was doing a whole lotta bad shit. I would not be who I am today without her and to be honest, I probably would not be here." Diomi says at one point, she had planned to "kill herself" on her 19th birthday. "I was a bougie homeless bitch and I was like, 'I am not finna be homeless for the rest of my life. I might as well kill myself because I'm not tryna be on the streets. I'd rather just die.' That was gonna be my solution. But [NextYoungin] gave me a home, she gave me happiness again. It's why I'm not dead."

In August, after being courted by various labels, Diomi officially signed with Columbia Records, the label that "offered [her] the most freedom." The rapper admits you can notice a big change in production quality between her first music video ("DDLG") to her second ("3 Musketeers"), and that "everything seems more professional now." Being on a label also offers somewhat of a safety net, especially considering the looming possibility of a U.S. TikTok ban. But Diomi's not too concerned about that.

"It definitely started my career and I enjoy being on TikTok, but at the same time, if TikTok went away, I'll still have my Instagram, Twitter and these interviews. If social media goes away, I'll still have music and a loyal fan base. Regardless of what happens, I've built myself enough to where I'm comfortable with things being shut down if it happens."

Nearly a year after she first connected with NextYoungin and mere months after uploading her first video to TikTok, Diomi's life is playing out more and more like a fairy tale, with lucite platform stripper heels in lieu of glass slippers. She and her BFF are kicking it in a sweet new apartment — complete with a 17-foot pole installed in the living room — and she's six months sober, a momentous cause for celebration considering her stage name references the "pink cocaine" mystery drug that nearly killed her last year.

New music is on the way, too, including a collaboration with Whoah Vicky. And despite getting kicked out once upon a time, Diomi happily reports her relationship with her grandparents is in a much better place today.

"I understand why they did what they did," she says. "And if they didn't do it, then I probably wouldn't be where I'm at today."