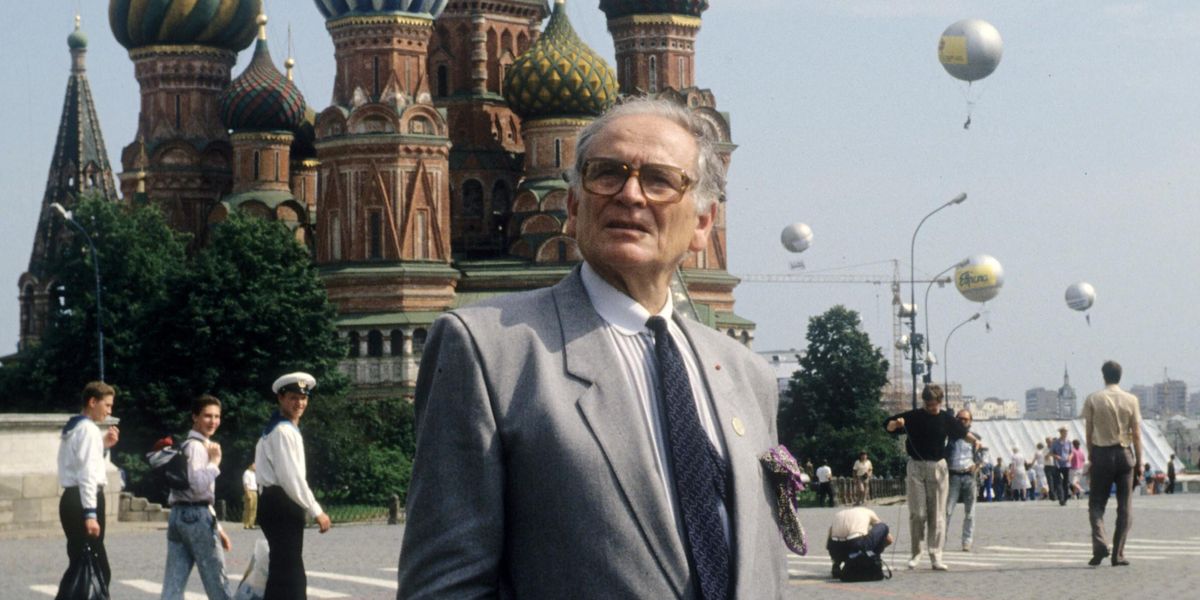 Reading January's news of the passing of design legend Pierre Cardin at age 98, I was saddened but also smiled at the memory of a wildly entertaining lunch I was lucky to have with the designer back in the '90s.

Mr. Cardin was passing through New York City and by that point was an international icon known for leading the futuristic fashion of the '60s, one of the most revolutionary eras in fashion. He dressed the Beatles in their Nehru jackets. He even worked with NASA to make a version of the space suit. He loved to break rules.

Designs by Pierre Cardin at Paris Fashion Week in 1968.

For our lunch, he chose Le Grenouille, an extremely fancy old-school spot on east 52nd St. frequented by the likes of Brooke Astor and Nan Kempner. I wore a colorful checkerboard sweater from Comme des Garçons and celery green Marc Jacobs corduroy pants with lots of jewelry, and carried an old Pierre Cardin logo tote bag.

Luckily, I got nervous before heading to lunch and called the restaurant to check on the dress code. It turned out jacket and tie were required. I was calling from a fashion shoot and wouldn't have time to go home and change, which wouldn't have helped since I didn't own a tie anyway. The host at the restaurant told me they had a few extra jackets and ties in the coat check just in case. I arrived and since the host couldn't tie a necktie either, we took a scarf and made it into an ascot instead. With that, I was led to Mr. Cardin's table.

A total charmer, Mr. Cardin was a handsome silver fox and already in his 70s at the time. He complimented my Cardin bag and began regaling us with stories of his brand licensing. He was a pioneer in lending his name to all sorts of products, from candies to housewares to bed sheets. He told me his frying pans were a sensation in Vietnam!

Mr. Cardin was the first western designer to sell — and manufacture — in communist China and the Soviet Union. He had a fascinating story about every country in the world! I asked him to pick the most incredible place he'd ever visited and he said — without a doubt — Libya, where he'd been invited by Colonel Gaddafi. He told me he'd never seen ruins anywhere else like the ones in Libya and without a single tourist at any historic site.

The Palais Bulles in France.

The Palais Bulles in France.

I was fascinated to hear about the Palais Bulles, the Bubble Palace that Mr. Cardin had bought near Cannes in the South of France. It was a futuristic fashion lover's dream that looked part space station on the moon and part bachelor pad at the bottom of the sea.

Having lunch with Mr. Cardin was such a delight. Being in my late 20s, I thought someone in his 70s was really old, but Mr. Cardin was vital and hungry for adventure. He made fashion history at one of the most disruptive times in the 20th century, and I'll always cherish my afternoon with him discussing his Vietnamese frying pans and Bubble Palace.