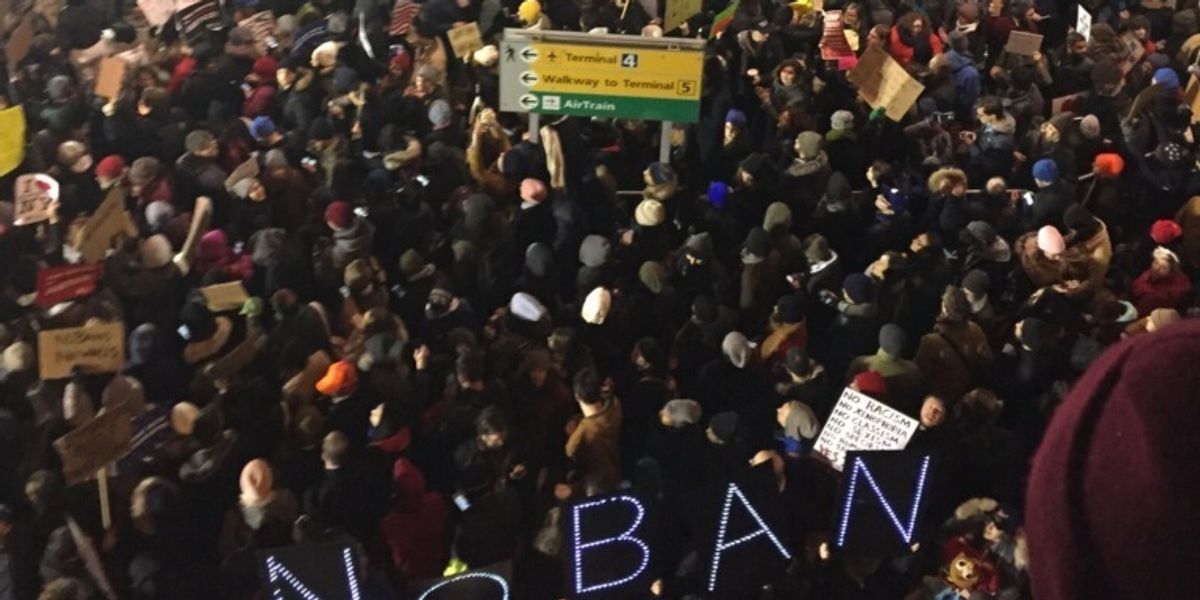 MAJOR UPDATE: A federal court in the state of New York has granted a stay against the executive order calling for a ban of refugees and immigrants, reports the Verge. The executive order still stands, but those being detained are no longer allowed to be held.

UPDATE: Airbnb CEO Brian Chesky has tweeted that Airbnb will provide free housing for those no longer allowed in the country.

Airbnb is providing free housing to refugees and anyone not allowed in the US. Stayed tuned for more, contact me if urgent need for housing
— Brian Chesky (@bchesky) January 29, 2017

UPDATE: ACLU has posted times for airport protests mounting around the country

UPDATE: The protest at JFK has swelled and protesters are chanting "No registry, fuck white supremacy, no ban" in terminal 4. Photo below.

Yesterday Trump signed an executive order to indefinitely ban incoming Syrian refugees and limit the flow of people coming from the Muslim majority countries of Iran, Iraq, Syria, Sudan, Libya, Yemen, and Somalia. All would be subject to "extreme vetting," Trump said during the signing. Syrian refugees who had been promised a place in America have already been turned back.

Since the order went into effect, greencard holders and those with dual citizenship for these countries have been detained at airports by government agents. Today, hundreds of people are protesting outside major international airports for the release of those being detained.

There are reports being made by social media users that agents are not only detaining greencard holders but also asking them about their social media posts and views on Trump.

I want to repeat: Green card holders were handcuffed, their social media was reviewed, and they were asked their views on Trump#MuslimBan
— Trita Parsi (@tparsi) January 28, 2017

Trump said Christian refugees would be allowed into the country, who he said are targeted above all others. This executive order has nothing to do with refugees, it's about targeting an entire religion. It should be noted that Trump left out the Muslim majority countries, like Egypt and Saudi Arabia, he has close business connections to. This is a ban on Muslims without any basis and only cruel intention.

You can join the protest in most major cities. Many have pages on Facebook disseminating information, like this one for the current JFK protest.