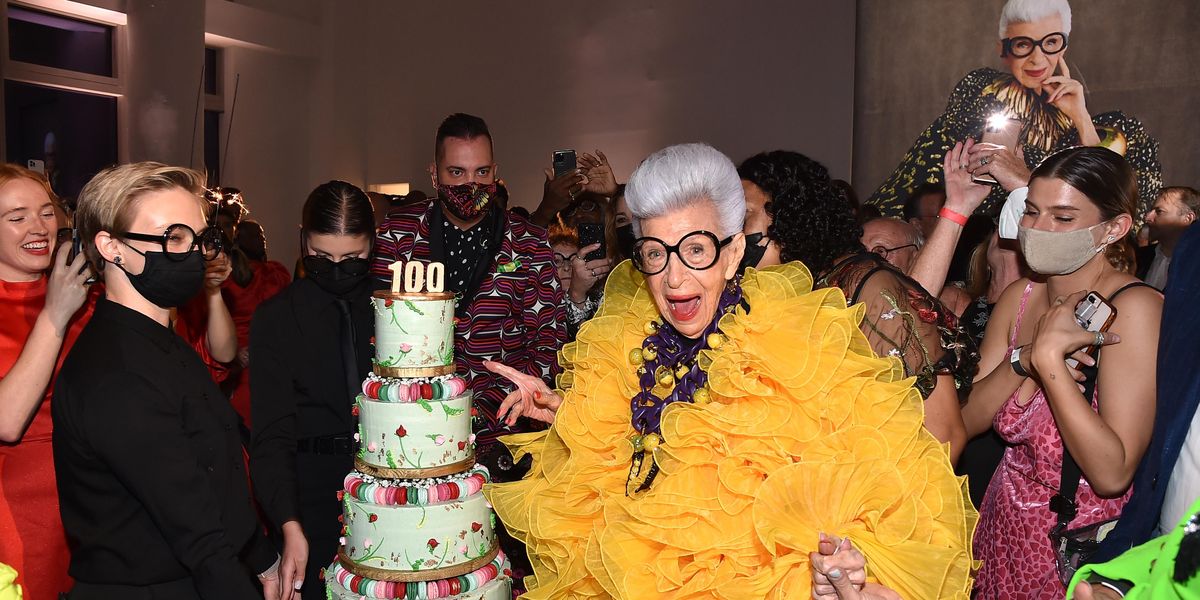 The first in-person round of shows at New York Fashion Week since before the start of the pandemic also means a return to epic parties, intimate cocktail events and other star-studded VIP events. From Dior's exhibit opening night in Brooklyn to Kim Petras and Paris Hilton entertaining the crowd at Saks, here are the NYFW parties everyone was talking about this week.

On the fourth day of fashion week, Iris Apfel rose again to remind us all why she's still eating up all the other girls. High up on the 107 floor of Central Park tower, the industry icon celebrated her 100th birthday surrounded by family friends and famous besties. It was also a celebration of her upcoming H&M collaboration.

Halle Bailey was among the evening's special guests. "Even today, seeing her walk in, unapologetically herself in this bright yellow dress makes you feel like, 'Oh! I can be myself!," because this woman continues to do it, even at her age," the Chloe x Halle singer said. "Fashion is a symbol of hope, of change, of excitement. I'm grateful for another vessel to channel my energy into."

For Barbie Ferreira, certified Euphoria it-girl, it's all about advancing the Iris Agenda. "Dude, she's a New York icon. I think that celebrating someone so beautifully creative and an absolute genius is so wonderful," she said. "I wear glasses, I love big glasses. That's all her influence. The thing about New York is that people express themselves in a way where you can't find anywhere else. Now that I live in LA, I come back and I see the vibe here and it doesn't compare." – Ana Escalante

The beauty world rushed to NYC's Boom Boom Room Friday night to celebrate Saweetie's new role as the global brand ambassador for MAC Cosmetics — another impressive title for the Icy Girl, who just recently launched her own meal at McDonalds. Names like Ashley Benson, Alton Mason, Ellen Von Unwerth and Law Roach all stopped by, sipping and dancing to DJ Miss Milan as Saweetie herself got behind the bar to pour champagne into guests' flutes. The space was transformed into a whimsical garden, decorated with roses, crystals and an oyster bar. – Justin Moran

UGG held a fabulous cabaret show in Sony Hall with a performance by nightlife fixture Susanne Barstch to celebrate the brand's upcoming "FEEL___" campaign. Attendees included Tommy Dorfman, Benito Skinner, Debby Ryan and Aquaria. "Not only [Susanne] she been an unwavering champion for the LGBTQIA+ communities since the 80s but she also wears Lycra and latex better than anyone I have ever seen," said UGG president Andrea O'Donnell. "She also knows how to throw a great party and I think we all deserve one of those."

After a successful run in Paris, Dior brought its Designer of Dreams exhibition to the Brooklyn Museum in New York, which iy celebrated with a VIP opening night featuring guests like Gossip Girl's Thomas Doherty, Kacey Musgraves, Liza Koshy and Lorde. For this slightly updated exhibit, a scenographic narrative captures more than seventy years of Dior's work, starting September 1947, just a few months after the New Look, when the couturier flew to the United States and formed a relationship with the country.

Just before Fashion Week, Bella Hadid was announced as a partner for wellness drink brand Kin Euphonics. The celebration was held on Wednesday inside Spring Studios, with Florals by Fleurotica adorning the room and Kerwin Frost spinning tunes for guests that included Taraji P. Henson, Barbie Ferreira and Halsey. Naturally, Hadid's mom Yolanda and sister Gigi also came out to support.