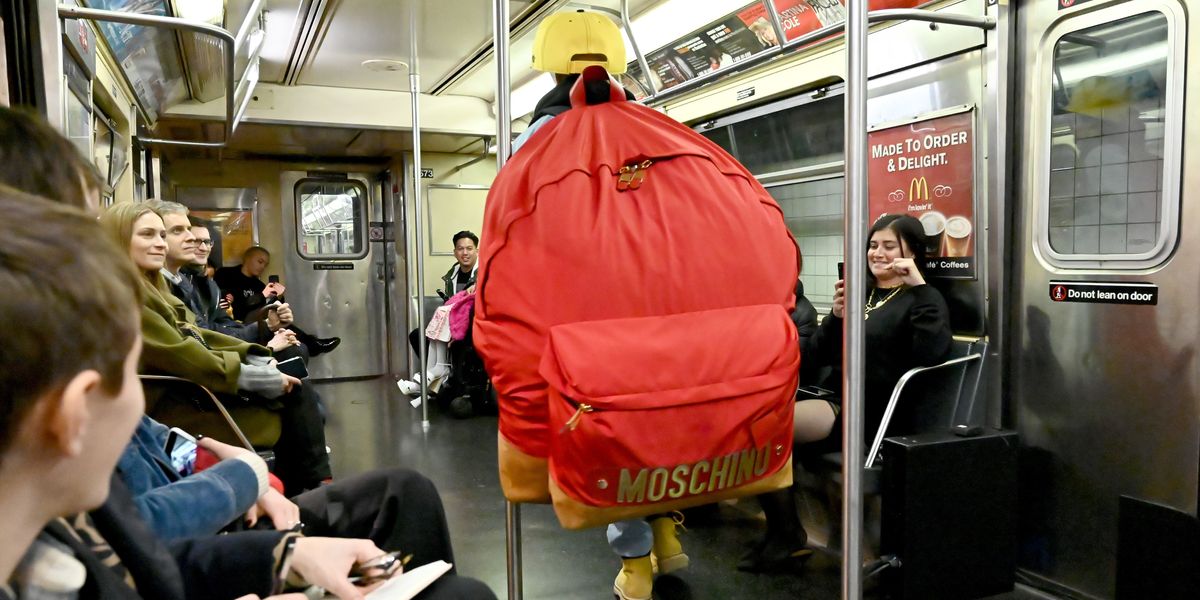 It's not just teeny-tiny purses that have everyone buzzing this year. On the other end of the size spectrum, giant handbags continue to dominate the streets and runways alike. As was the case at Moschino's show yesterday, staged in an empty subway carriage at the New York Transit Museum.

The show was presented as part of the Pre-Fall 2020 schedule; brands all over are showcasing collections this month, to drop next summer. (Dior Men and Chanel just staged theirs last week in Miami and Paris, respectively.) Jeremy Scott, Moschino's creative director, dedicated the brand's first-ever New York show to the city that never sleeps.

"I wanted to offer a little bit of everything," Scott said in a press release. "A round-the-clock set of ensembles for city girls and guys who aren't afraid to go from the ballroom to the back room, then watch the sun come up over the East River. There's nowhere else in the world where you get that kind of energy and magic!"

Scott continued to amplify the Moschino codes of irony and wit with his own cheeky sense of humor. In addition to the aforementioned XXL bags, he sent out models wearing supersized puffer jackets and big chunky chains. A bag shaped like a Bic-style lighter is also sure to be street-style fodder come next fashion week. Deconstructed tweed, color-blocked windbreakers, and flat brim hats also abounded.

The show concluded with Moschino-clad dancers hyping up the guests with energetic sets of moves, hat tricks, and pole stunts, a nod to the subway entertainer and buskers that passengers have likely encountered on their commutes once or twice.