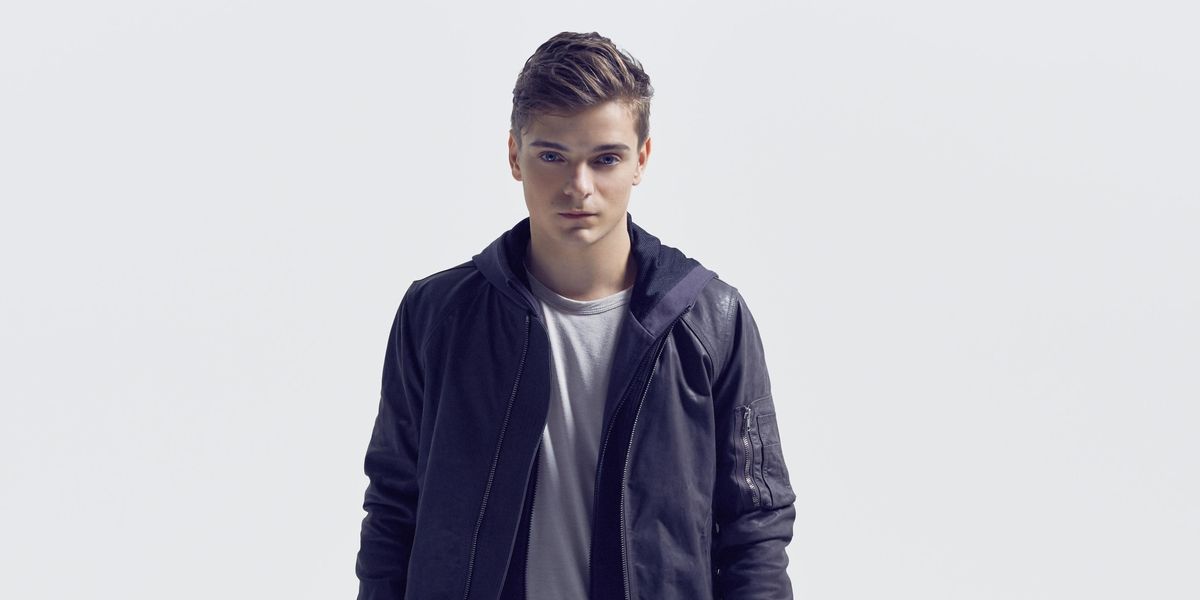 At just 20-years-old, Dutch DJ Martin Garrix is already working with bold-face names like Usher and Justin Bieber, playing residencies in Ibiza, and being named the DJ of the year. We caught up with Garrix at Coachella weekend 1 to talk his intense fans, new music, and making the most of festival culture.

Congratulations on your show last night. I had to listen to it from outside the tent, because when I got there, the crowd was just massive. Were you expecting that kind of turnout?

I played Coachella two years ago, and that was a crazy experience for me. It felt really good to be back. The energy was there.

The people are so excited! Your fans are really engaged and obviously really into it. Do you have a lot of interactions with them? Fun fan stories?

I try to have a lot of interaction with them through social media and stuff. Also at the festival, I'm running around myself, so I bump into them and they're like "Yo, Martin!". There was this guy I loved who had all these signs up at the show, and it was really cool. And also, like, I read a lot of the tweets about the show.

So you're going around to shows on your own? You're just there hanging out?

Yeah, it's fun. I performed here three years ago, in the last few years, I just went partying and enjoyed it, just get inspired because that's what this festival does to me. because there's so many different music genres, so many different stages, and I'm just running around here getting inspired, meeting all these dope people, seeing all these dope bands playing. It's really inspiring.

It's like really any genre of music you want to hear, you can find.

Any one! Anybody can go to Coachella--it doesn't matter what kind of music you like, there's always a schedule for it.

There is. And then you'll also discover something completely different that you'll love.

Also, you brought out Dua Lipa yesterday. She's a PAPER favorite. How did you two come together to make "Scared to be Lonely"?

I had a demo for "Scared to be Lonely" and I was talking with my team and they were like "Ok, Martin, who would you love to collaborate with?" And I knew about Dua Lipa's stuff because her voice is super unique and I said, "Oh, do you think Dua Lipa would be down to cut an electronic music record?" and they were like "Ooh, I'm not sure." Because she's a very cool act. And then I sent her the song and the next thing I know, they love the song and they cut it. And then there was lots of back and forth with the song and then they have the final. It's been super fun. I'm really good friends with Dua. Besides being an amazing artist, she's also an amazing person with great energy. It's fun to be around her. She makes everyone happy.


Did you plan for a long time that she would be coming to the show tonight?

Cool. Also, 2017 is a big year for you. What is the next step after Coachella? What are you looking forward to?

And then my tour starts again. And I've been working on so much music in the meantime. New radio song coming up. Next weekend Coachella's going to be fun, I might play some new music. So it's going to be fun--I have a lot of music in the works. I am very happy with how the show is. I have an amazing team around me light-wise, visual-wise. I feel like a show is a show not just a DJ set. I'm ready for the summer. We're playing some really cool crazy festivals that I'm excited about, so I'm very happy.

I also heard that you're going to be showing up at occasional dates for Justin Bieber for Purpose.

I did Australia with him--5 shows in Australia and 1 in New Zealand. And that was fun. It's very interesting because it's a very different audience than what I'm used to, but that was what made it fun. I had no idea what to expect. There was also just worry that everyone would just be waiting, staring at me, waiting for Justin to come on. "Where's Justin?"

But I played my first show in Perth, that was where we played the first show. And when I started playing my first song, the place exploded. The whole tour has been super fun. I'm good buddies with Justin, so it was a great tour.


You've been working with some pretty big names--Justin, Usher. Is that intimidating?

It is intimidating! I made a song with Usher, "Don't Look Down", two years ago, and I grew up listening to Usher. Everybody grew up listening to Usher, so I remember just walking into the studio and sitting next to him and [saying], "What the fuck? Is this real? This is Usher." And then you're there to make a song together. He's there because he likes my stuff and I'm there because I like his stuff. It was a really great connection. And we created, "Don't Look Down" and I'm really happy with it.


Do you have a favorite festival or a festival you're really excited for coming up?

I'm excited for next week's Coachella. Tomorrowland, I'm doing the mainstage both weekends, so that should be really fun. There's a crazy festival in Romania, Untold. I'm excited for every single show. Every end of the year for the last 4 years I've been doing my own headline show in Amsterdam, my hometown, so that's always fun. We did 30,000 tickets last year, and this year we're going to do 40-45,000, so it's going to be fun.

Are they enjoying it too?

They love it. My sister was running around by herself just to see her favorite acts. It was nice. Really cool.

You're now the cool big brother, because you can be like, "I will make sure you see all your favorite bands."

So on the new music front--you said that that you're working on new songs. When will things start to trickle down? One was played last night?

I played one new song last night. It was a more clubby song. And then I'm working on a new radio mix for "Scared to be Lonely". I tried to keep the balance between the radio songs and all the Martin Garrix high energy stuff. Because I love to do that stuff as well. I just go in the studio and I just have fun. Whatever feels good. And that's what I love with making music. There are no rules.

Exactly. If you think too much about what you want to do, it's stupid. You should just do whatever feels good for you. To me, that's something that I've learned in the studio. If you overthink it, it affects your creative process.