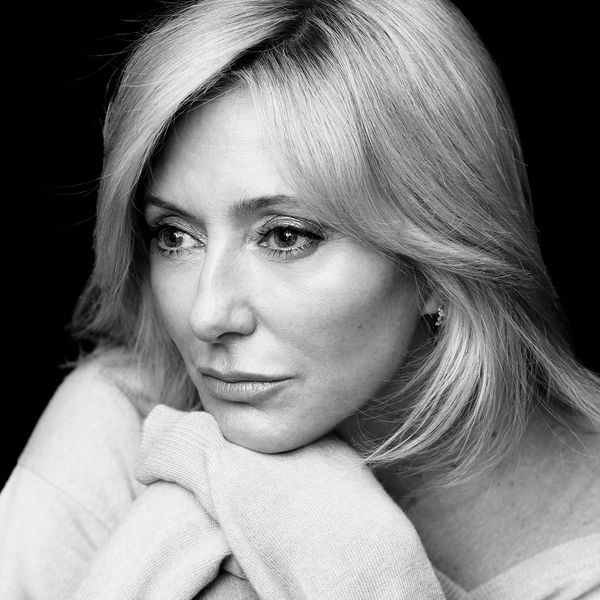 By any measure, Marie-Chantal of Greece is a multitasking boss. She runs a successful childrenswear brand that bears her name; she's on the board of DFS Group Ltd (Duty Free Shops, which was co-founded by her father) and she's just released a book, Manners Begin at Breakfast: Modern Etiquette for Families.

She also happens to be Crown Princess of Greece. And, through her husband Crown Prince Pavlos, son of King Constantine II of the Hellenes, she's related to nearly every European royal family. But despite her rich connection to history and the past, she lives life very much in the present — even on social media.

"I think in today's world if I'm going to be on social media I might as well show you the real me," she says, even when her "spontaneous" approach to posting occasionally gets her "into trouble." Or when her kids think she's had too much screen time. "[My kids] will remind me, 'You've written an etiquette book — so put your phone down!'" But, as she adds, "We're all human."

You're an entrepreneur and mogul which is unusual for a royal. Is it hard to balance once with other?

It's so different for us. My husband's father (King Constantine II) was exiled at 24. He was such a baby. I look at (my daughter) Olympia who's 23 and imagine. They lost their crown in Greece and were sent into exile. My father-in-law brought up his children very Greek. They spoke the language, always in the hope that they would go back. You fast forward 20 years and you adapt. And (my husband Crown Prince) Pavlos being a young adult decided to get a great education. He went to the army. He did everything a royal was meant to do. That beautiful discipline and training and I think from that he is one of the most disciplined men I know. But he also has a sense of reality.

His father can now go back to Greece as a private citizen and he's very much loved and it's lovely to see that. You move on. You adapt, you survive and you make the right choices.

I think as parents that Pavlos and I have always aspired to make the right choices given our circumstances. What does that mean? Be busy. I'm incredibly blessed with the privilege to have had this wonderful upbringing and lived around the world but I always wanted to work because I saw my father as such a healthy role model for me. He always made time to come back to the home and be a family man. That sense of family was innate. Pavlos had that too. But we believe in being modern and healthy and happy and that sense of family and discipline keeps us with that sense of reality as well. We carry this big last name. He has all this heritage. I think it means just being good upstanding citizens and doing the right thing. Making the right choices. Keeping family united. Being good with your siblings. Being good with your friends. I hope that I'm raising my children with those values

Do you ever think about that when you're doing business?

Someone from my father-in-law's kind of family weren't too comfortable (with royals) working. I think going into the children's business was so sweet and they saw there was nothing wrong with it

They saw that it was just me being healthy, doing something I like. I was never exploiting the family or taking advantage. I was doing something that was complementary. We've built this wonderful relationship with my in-laws.

There's also a sense of reality. You have to get on and work and it's ok to do that as long as you do it correctly. When you're not offending or taking advantage. I would die if anyone thought I was taking advantage of that position.

Why an etiquette book for children?

I started this blog and then it eventually evolved into me talking about how to dress a child for weddings or what to do at birthday parties. There were all these questions that people were asking me and it was fun. Being a young parent, these are answers that everyone wanted to know. So, we started putting these blog ideas together and felt that it worked well with the brand and it was a nice synergy. I didn't want to do a book on children's interiors or what to feed your child. I thought it was really appropriate and fun especially given the times where I think politeness is a bit lost. So, let's remind people that manners do matter.

Have your kids read it?

[Laughter] They have. They'll remind me, "you've written a book so put your phone down." We all make mistakes and I'm not pontificating at all. It's a gentle reminder about what to do and how to start. And that it's important to start (thinking about manners) really young so it becomes a habit.

You're pretty real on your Instagram. Did you ever have...

A freak out if I did something wrong?

No, a plan or strategy for social media?

I'm very spontaneous and what you see is what you get. I think in today's world if I'm going to be on social media I might as well show you the real me. Sometimes I wish someone would do it for me. Sometimes I shoot from the hip and I get into trouble but it's okay. We're all human.

What made you decide to move to New York?

We always felt that our whole little chapter in NY wasn't finished. We moved to London. That was in our plan. Pavlos' business is based here in NY, but being European, he wanted his children educated in Europe. At the time he couldn't go back to Greece so he chose London because his parents were living there in Hampstead in England. When Olympia moved here and started University, I put it out there, "What do you think about possibly maybe one day moving to NY?" He said, "Perfect let's do it."

Your son Achi is an actor. How do you feel about that?

I've always encouraged my kids. They are who they are. You can choose to do whatever you want to do and you can be whoever you want to be. Chose any profession and I will totally champion you. Do the best, just as long as there's some contribution back to humanity. I think one has to. I want them to go out there and choose their paths and careers. I don't want them to go into the family business or tell Tino (her oldest son, second in line to the throne) one day he might be King. I think that's not right. I think he needs to figure it out for himself. I think that's what makes the best individuals.

New York is amazing. I'm so happy to be here. It really gives you this insane burst of energy. Since I moved to NY, I've written a book, I'm doing these amazing collaborations. It's been great. And I'm really excited to see how it evolves.