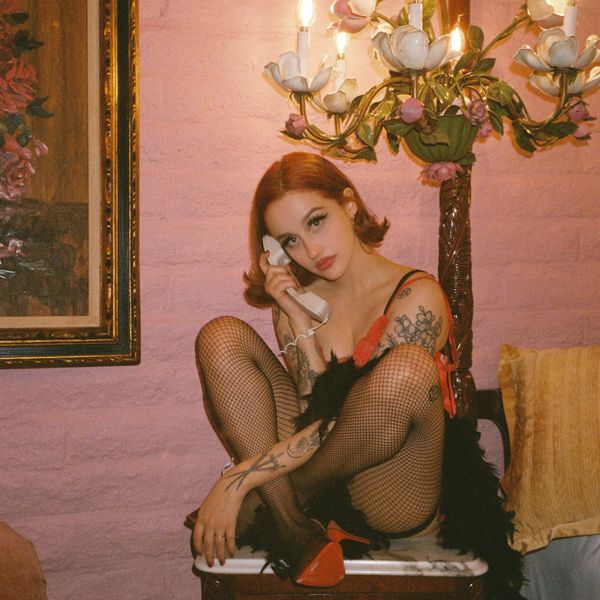 The first song Lav ever released, "From Me, The Moon," Billie Eilish wishes she'd written — though this should come as no surprise. The Venice-bred singer-songwriter started her career as a writer, and has penned poetry since she age 11. "From Me, The Moon," like many things in her life, kind of just happened.

"I made 'From Me, The Moon' in my bathroom at 3:00 AM in 15 minutes on GarageBand." After uploading it to Soundcloud in 2018, and finding out people liked it, she decided to seize the opportunity: "I was like, 'Might as well make some money off of this. I'm going to upload it to Spotify on TuneCore.' And then it blew up." So she quit school and left the residential center she was at in Utah to give music a shot back in LA.

When she found out Billie Eilish, who she considers the "John Lennon of our generation," liked the song, she couldn't believe it.

The 22-year-old has released a few singles since then, all of which are leading up to an EP slated to drop in January 2021, on top of maintaining a strong presence on TikTok, OnlyFans and Twitter for her hundreds of thousands of followers — all of whom tune in for her "oversharing" of personal, relatable content.

"My personality is very compartmentalized, and I consistently overshare so I can undershare, if that makes sense. So part of my persona was, I'm going to lay everything out. I'm going to make edgy jokes about my vagina and post nudes. And then part of me also has been writing pretty intimate poetry since I was 11."

While she maintains a fairly comedic social persona online, ultimately Lav strives to keep her lyrics earnest and vulnerable. "I try to compartmentalize my Instagram, where I don't make jokes and it's just very serious," she says. "It's been really weird to navigate, because I don't take myself too seriously, but I would like people to take something intimate away from my music."

Her latest single, "Reds," and its music video premiering today on PAPER, shows just how serious Lav is about her staying-power in the industry. "[It's] probably the most different of my songs," she says. "I really took inspiration from Methyl Ethel and Still Woozy and really New Age, neo-funk elements with 'Reds,' and I definitely want to go more into that direction." The result is a breezy track that revolves around the sweetness of a summer romance.

The music video for "Reds," which she co-directed, blends Lav's love of all things vintage and film. In it, we see the musician switching up wigs, ping ponging between different on-stage personas — a skill, we're sure, has been well-practiced.

Below, watch the PAPER premiere of the "Reds" music video, and be sure to stay on the look out for Lav's new EP, which is coming sometime in the new year.