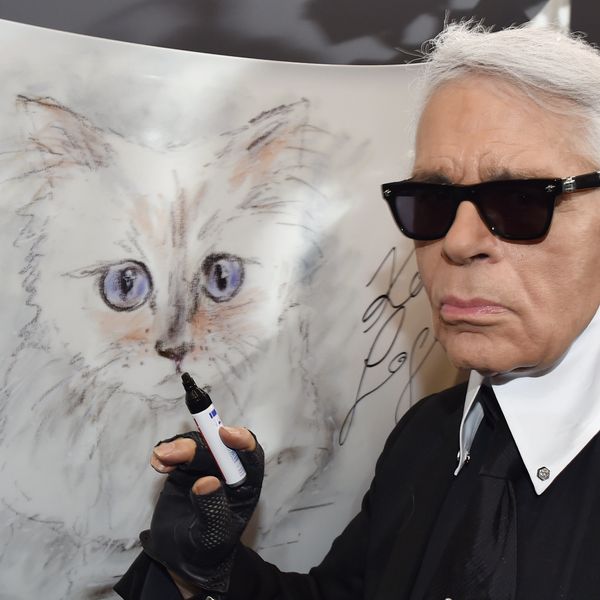 The late Karl Lagerfeld's devotion to his prized Birman cat, Choupette, is the stuff of fashion folklore. From posing together for Harper's Bazaar to pampering her with two maids, manicures, and flights on a private jet, Lagerfeld spared no expense for his beloved feline. So following the designer's passing, many began to surreptitiously speculate as to what fate might now befall the spoiled pet pointing out that Lagerfeld had said in several interviews that he wanted to leave part of his estimated $200 million estate to her.

The idea of Choupette becoming a rich heiress seemed fitting given her life of luxury, she is a distinguished cat after all. Accustomed to the finer things the world has to offer, all it takes is one look at her fluffy magnificence to know that it would be criminal to deprive this feline of her rightful inheritance, and yet, according to French law it is tragically illegal to bequeath money to an animal.

Obviously, there are work-arounds: Lagerfeld could have set money aside for a caretaker with explicit instructions to only spend it on Choupette or even use his German citizenship to get out from under the thumb of French law. But odds are that regardless on locale any money left for the cat will be heavily taxed with Choupette likely only seeing about 40 percent of any potential fortune Lagerfeld would have left her.

A tax attorney told Bloomberg that "the money never belongs to the cat. Inheriting is nonsense," which is frankly just rude. While uncommon, it is not unheard of for a pet to be the recipient of a massive fortune with many documented cases of cats, dogs, and chimpanzees having inherited millions from their owners.

​And while the idea of Choupette living in an opulent mansion blowing obscene amounts of money on catnip and caviar may woefully have to remain just a fantasy, it doesn't mean that the luxe life has to end for fashion's favorite posh pet. Choupette has already amassed a pretty substantial following on Instagram and we're sure she could easily pivot her career into that of a lucrative kitty influencer if she wanted to. As always, PAPER's invitation to come claim the spot the digital editorial team cleared out for her in their cubicles still stands.