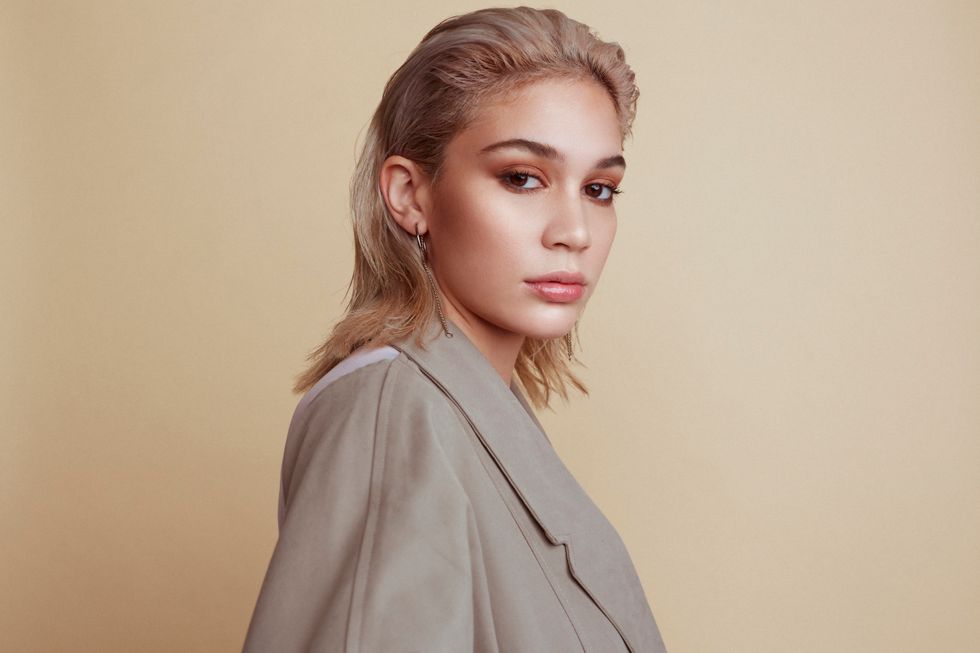 Jess Connelly is a Filipino-Aussie singer and songwriter poised for a big-time crossover.

For the past few years, she has represented the flourishing arts underground of her native Manila, with a trend-setting throwback R&B sound and effortless style that mainstream acts worldwide are always attempting to replicate.

After a string of collaborations on tracks by artists like Lustbass, CRWN, Eyedress, and P-Lo, Connelly built a loyal following in the Phillippines. But this August's release of her full-length JCON mixtape was Connelly's official first step toward international success. Judging by the sounds of that album, which blends the type of easy-going but progressive R&B that you grew up listening to with smooth vocals, and confident lyrics, Connelly is well on her way.

Take the glamorous new video for "Process" as case in point, premiering exclusively with PAPER. Connelly and Japanese rapper Awich make an iconic girl-power duo through the streets of Tokyo, rocking ultra-chic looks in vibrant, trippy street scenes and Connelly sings about a relationship in process. But like most of Connelly's music, "Process," which was produced by Jay Anthony and Julia Lewis, takes on an even more relatable quality, due to the familiar nature of her lyrics and an easy, hummed vocal: "Lay back and take my time with you/That's just the process/Let's just feel it out." Something about that feels like a comfort. Her process might be about not rushing a relationship, but the message can apply to career, family, and life as it is.

In "Process," Connelly demands that audiences meet her right where she is, and keep your eyes on her: she's not slowing down. Watch "Process," below, and read on as Connelly discusses what's next and how to preserve your sense of self online and in real life.

What's it been like becoming more visible in your home country since coming out with music? How's that been for you so far?

I think everything is forming into what I want it to be, so it was just the next step that I wanted. I'm very happy, it's nice to know that I have a lot of support there.

I have also heard that you may have some imitators, or at least people that are inspired by your style and your sound.

But it's not Asian if there's not some kind of imitation going on.

How does that feel, knowing that you may be in a position of influence at what is still an early point in your career?

It can be frustrating, naturally because it's — what I do. In the beginning, I was always told "this doesn't work in the entertainment industry." It's really ironic that now some people from the entertainment industry are emulating what artists from the underground do after [we've] been told for the longest time that the audience doesn't want that. But, first and foremost, it's flattering. It's a good sign, it's not such a bad thing. It's nice to see change.

When you say you've been told that certain things didn't work, what did you mean specifically? Was it in terms of being yourself?

Yeah, just being myself, dressing how I want, writing my own music and putting it out, and just having complete creative freedom. That's not normal at all in the Philippines. I think even in Asia in general, it's more like manufactured pop stars and that kind of thing. It's a really tired formula in a lot of people's opinions.

And being a self-produced artist both writing and producing your own work, do you feel like you're at a point now where it's easy for you to do this without support, or do you still want that sometimes?

I mean, there's a lot of benefits you get if you're signed to a major label. I don't know if that's pressure that I could handle right now, because I don't make the final choice. There's a lot of opinions from people who don't make music about what they want to release, and how they think it should be released. I might get there in the future, I might be totally fine with having to deal with that side, but for me right now, I'm still figuring out a lot. I think I can grow so much more musically, and I'd like to do that first and experience all of that completely before I go to the machine.

The "Process" video feels very much like a throwback of some of the artists I grew up listening to, like Aaliyah, TLC, and others.

When we were making the video, your references – the ones you thought that you saw — that's it! I grew up with that, too. I've been in the mood to make pop-star influenced videos because I'm not a pop star. That style of the late-90s early 2000s — I think I can be experimental style-wise with videos, that's the fun part of it. I love this video, I love it so much. We filmed it in a couple of days, a friend of ours, the rapper Awich who is in the video helped pick the director, Michael Laburt. It was so fun, just one day running around Tokyo shooting.

What was it like filming it on the street with people watching, was that weird?

It probably should be weird, but when I go to shoot something, I really enjoy it so I don't really care! People didn't know what the fuck was going on, there were a bunch of tourists taking pictures and stuff, and Awich is pretty badass herself, so she doesn't usually give a fuck about anything. When everyone around me is comfortable, I won't care either. It did look like we were some walking advertisement for something, just driving around Shibuya.

What was in your mind when putting a visual to the music?

To be honest, I was just open to any of the Michael's ideas. I had watched some of his previous work, and I like his very trippy effects. I don't know what you would call it, but he makes it (the video) look like an acid trip, I would say. I don't do that, but I would assume that's what a trip looks like. I think the visuals match the vibe of the track, but there's definitely direct translation of the storyline of the video to the song. It's mostly just saying "take your time, enjoy." It's nothing too deep.

"I want longevity, and I would rather grow slowly and organically and have the correct audience versus a quick come-up."

How has the mindset of taking one's time applied to how you've navigated your career thus far?

I think that a lot of people want a quick, overnight — or what looks like an overnight success. People want clout, people want to blow up on the internet now that everybody can be famous. I want longevity, and I would rather grow slowly and organically and have the correct audience versus a quick come-up. It works for some people, but I don't think that's what works for me. I've gone through trial-and-error, and I will continue to do that.

I think if you force it, too, people can tell.

A lot of people don't care who's behind the numbers, you know what I mean? Or, people will have a massive social media following, but they can't sell tickets, or their music doesn't stream. I'm really just music-focused, I don't really care too much about that Instagram stuff, but in the Philippines, that's a very big thing. That's also not the norm, to not care about those things, because you can fake a lot of that.

I was just thinking, talking to you now and putting the pieces together of your image, your sound – you're reminding me of how Aaliyah used to give interviews, where she would only say as much as she needed to say, not much more. We're in this age of over-sharing, but how do you separate real life from what you present online?

I do understand that there's real life, and then there's a product that I put out into the world. I'm not ripping anybody off, [my music is] definitely me, but I'm able to separate the two. I look up to artists like Aaliyah and Sade and how well they've controlled their image. People don't need to know everything, and I know that people want to get to know you more, just like me. When I come across a new artist — you want to find out more about them, right? And you want to find an interview, and all of that. It actually makes you want to know more about them. It's not a strategy for me, but it's just what I'm comfortable with. I don't think everyone has to know all your business. I can know you in real life, I'm cool with that.

Yeah, like we can chop it up if we meet in real life, but otherwise…

I think it's so important to separate the personal and private as an artist. Out here in the Western world, you can live a nice, regular life. In third world countries, people don't have that — we don't have nice streets to walk everywhere, so people usually create a fake life while in real life, they don't really have a strong circle.

Why do you think that people feel the need to create a fake public persona?

I think because people think it's making them happy but it's not. You're losing your happiness every time you do it [live through a public persona]. Everybody around me has an Instagram following back home, and I can see how they're affected if they don't get enough likes, or they can't go anywhere without posting the whole situation. People ask me all the time why I don't post a lot on my Instagram story, and I'm like "you don't need to know what happened last night!" I know what happened last night, and I had a good time. You don't need to prove anything to people, that's what it is. People need to prove to others that they're living this happy life, and it's just all a façade. They gain happiness from putting it out there — they love the idea of people thinking they live some type of life.

"You don't need to prove anything to people, that's what it is."

Did you ever feel any pressure to put yourself out there, or have you always internally fought against it?

I would say when I totally turned my back on what I was doing before to do music 100 percent, it was really frustrating. At that time blogging was huge so everyone in the Philippines was trying to be a blogger, everybody had something going on, everyone had these numbers, but with no substance. I think that was frustrating for me knowing what I bring to the table and nobody gives a fuck because I'm not conforming to certain ideals. That's when I started connecting with people offline more, and growing my strong circle. That, to me, is so much more important. When I threw my listening party, everyone in the city that I wanted to be there was there, and that's more important to me [than a huge online presence]. With what I'm doing with music at home, people can't do that, and that's what makes me very happy.

You only have the people and things around you that you want and need to have around you.

Right, I'm just trying to not fake it as much as possible, and put in all the groundwork so when it [my career] grows into something bigger, it has a strong base. Like the song says, "that's just my process."