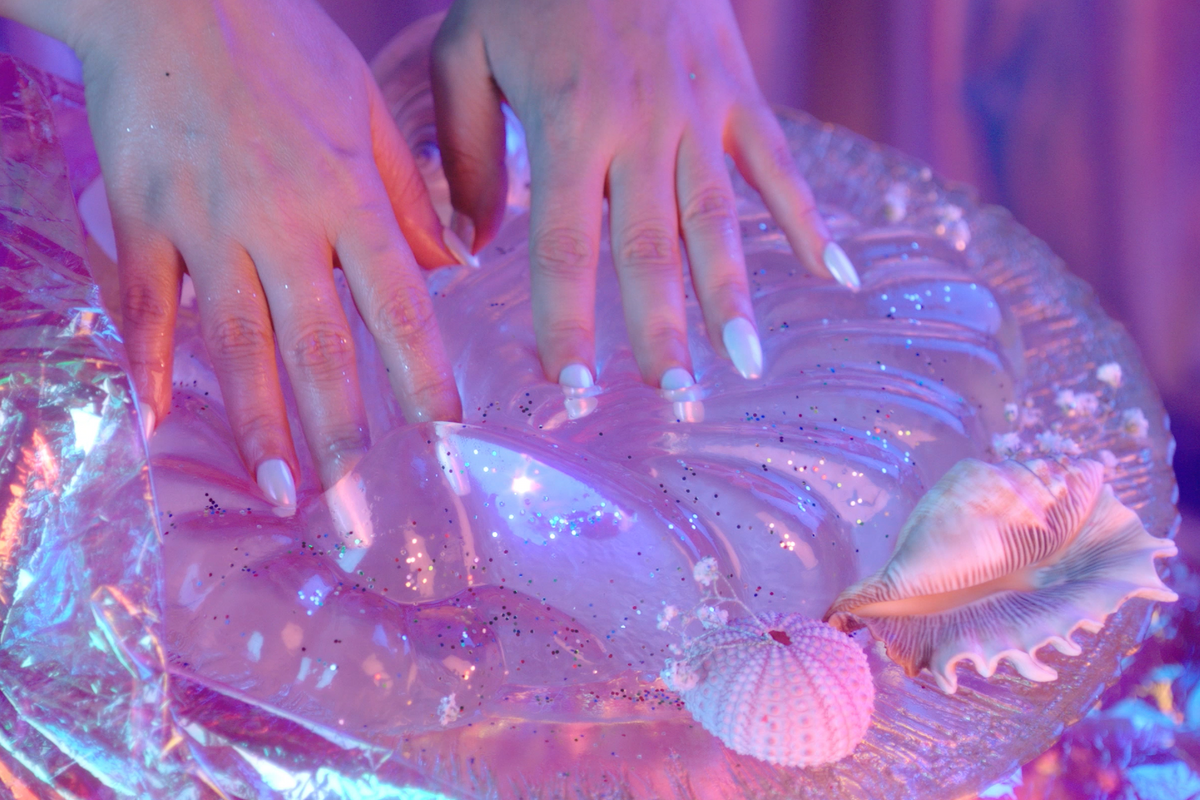 Never has gelatin been so sensual as it appears in "Eléctrico," the new video from Dominican-Brazilian artist Jarina de Marco. You've likely not seen gelatin so intricately displayed, either: flowers adorn some molds, others feature milky infusions, some are glittered with brightly colored shapes and scenes suspended inside. Another takes the form of a bubbly, slappable booty. It's out at 2 PM EST tomorrow, but PAPER has the exclusive now, plus insight from de Marco on how the fantastical exploration of her ongoing obsession with Jell-O became a centerpiece of the clip.

Directed by Sindha Agha with additional art direction by de Marco and set design by Mood Killer, the video, which features composer and longtime friend Cinque Kemp, is sexual, sensual, yet somewhat strange — in the best way.

The song "Eléctrico" was featured in the third and final season of Vida, the Starz network show helmed by Tanya Saracho, who de Marco has worked with since its 2018 debut. Often her music has been used in connection with Mari, an activist who navigates through her personally changing perspectives and subsequent new routes to protest.

But "Eléctrico" came alongside a cameo with IRL close friend Curly Velasquez. While she's also performed the song live in the past, De Marco says that since its airing on the show, she's been "lovingly harassed" by fans to release the slow-burning track, which features Dominican multi-instrumentalist Diego Raposo.

Answering those pleas with Jello-O is really going the extra mile, we think. She'd actually been holding onto the video since last year; the track will be included on an upcoming album, probably out next year late in spring, and she wanted to get a little closer to its release before unveiling this captivating display of whimsical kink. (The tone of "Eléctrico," by the way, is very much indicative of what's to come on that LP.)

Comparing the accompanying sensation to ASMR, we wonder together if there's also an online community for this gelatin fetish. There's more meaning behind the compulsion to squeeze and poke her creations, though.

Early last year she art directed an exhibit in LA, organized with GXRLSCHOOL and its founder Anna Bulbrook, that explores body image through Jell-O.

"It's so arbitrary that the same texture, a boob and a butt, that Jell-O can be, is so venerated — but the same texture in our belly or our in our thigh, the same exact jiggle, it's like, oh, no! We're not going to let that jiggle," she says.

Everyone has bad days, De Marco notes, but she's evolved into embracing her own body — all versions of it.

"I'm a Latina woman, I'm a voluptuous woman," de Marco says. "My body has changed and fluctuated in weight throughout my entire life, and I've gone through moments of hating the fact that I've gained weight. Now I'm in a place where when I go up and down, I just let it be, and I enjoy the parts. For example, when I'm really skinny, I don't have any boobs. When I'm not so skinny, I got great boobs! I enjoy the parts of me that show up when I fluctuate."

She describes the Girlschool show vividly. There was a massive table brimming with gelatin creations, all underlit, at the entry. "Wery Rococo, very Marie Antoinette," De Marco says. Filling another room was a set of playable gelatin synths created by a group of women specializing in the making of analog synths. San Cha and Leather Papi performed. A dance troupe ultimately destroyed the welcome table focal point, throwing Jell-O everywhere, including onto the audience.

"At the end there was a conversation with two people, a woman and a nonbinary person, about transgender bodies, nonbinary bodies, fat bodies, skinny bodies, and deconstructing and reconstructing what it means to live in a body," she says. "It was really special."

None of this would have been possible — the video for "Eléctrico" included — without the help of gelatin artist Luz Magaña, though. She met the Mexican master repostera through her son, who'd photographed de Marco two days before as she performed at a downtown LA warehouse.

"This woman came like a goddamn Jell-O angel into my life," she says. De Marco learned some new artistic skills from her, one of them including the use of syringes to inject flower designs.

When Magaña emigrated to the U.S., it was her gelatin skills, a tradition that goes back at least to her husband's grandmother, that helped her grow a business.

De Marco is, of course, also an immigrant. The way she describes connecting with Magaña, you can tell she's grateful, and that uplifting marginalized folks is absolutely in her nature. In fact, it's in her blood: In the D.R., her parents protested a newly built monument to Christopher Columbus by then-dictator Juaquín Balaguer by performing a song that totally dragged them both. (The family was persecuted, relocating to Canada. De Marco did not return until she was 11 years old, once Belaguer had died.) Before that, her grandfather was involved in the planned assassination of another dictator, Rafael Trujillo, in 1961.

Jarina De Marco's parents in their band, Irka and Tadeu, performing their protest song in Canada

She stresses the importance of incremental change in the US now, absolutely right now, before things further devolve. De Marco herself cannot vote; her US Green Card means she's a permanent resident, but not a citizen.

"I'm coming from the immigrant standpoint, I'm coming from people disappearing left and right," she says. "A country can become chaos. I'm telling you, I really feel that's what's going to happen [if Trump is reelected]."

If you're wondering whether or not she's pro-Biden, she's sorta not. But she wants you to vote for him anyway.

"The big picture is that we are at a crossroads in our life where we are about to lose our democracy," she says. "[Biden] is problematic and has a shit-ton of skeletons in his closet. But let's deal with it after the fact."

De Marco cites a Ruth Bader Ginsburg quote about "enduring change" happening incrementally. That doesn't mean it isn't radical, either. And voting for Biden doesn't mean you're a fan. (For the record, she'd rather have seen Bernie run.)

The immediate consequences for Black people, POC, Latinx communities, immigrants — that's what De Marco is concerned about. Anything else is "short-sighted," she says.

Evolution is key here: How De Marco gradually came to love her body, in all its iterations, was not a switch-flip change. It was a process: a goal she met by cultivating a positive image over time.

Though she was close, Ginsburg wasn't a perfect Supreme Court Justice, lawyer, or person. But she most certainly got it right about real change happening over time: progress is a marathon, and it has no end.

Along the way, though, there will be moments that bring as much positive excitement — and unexpected lessons — as Magaña and De Marco's elaborate, jiggly Jell-O arrangements.