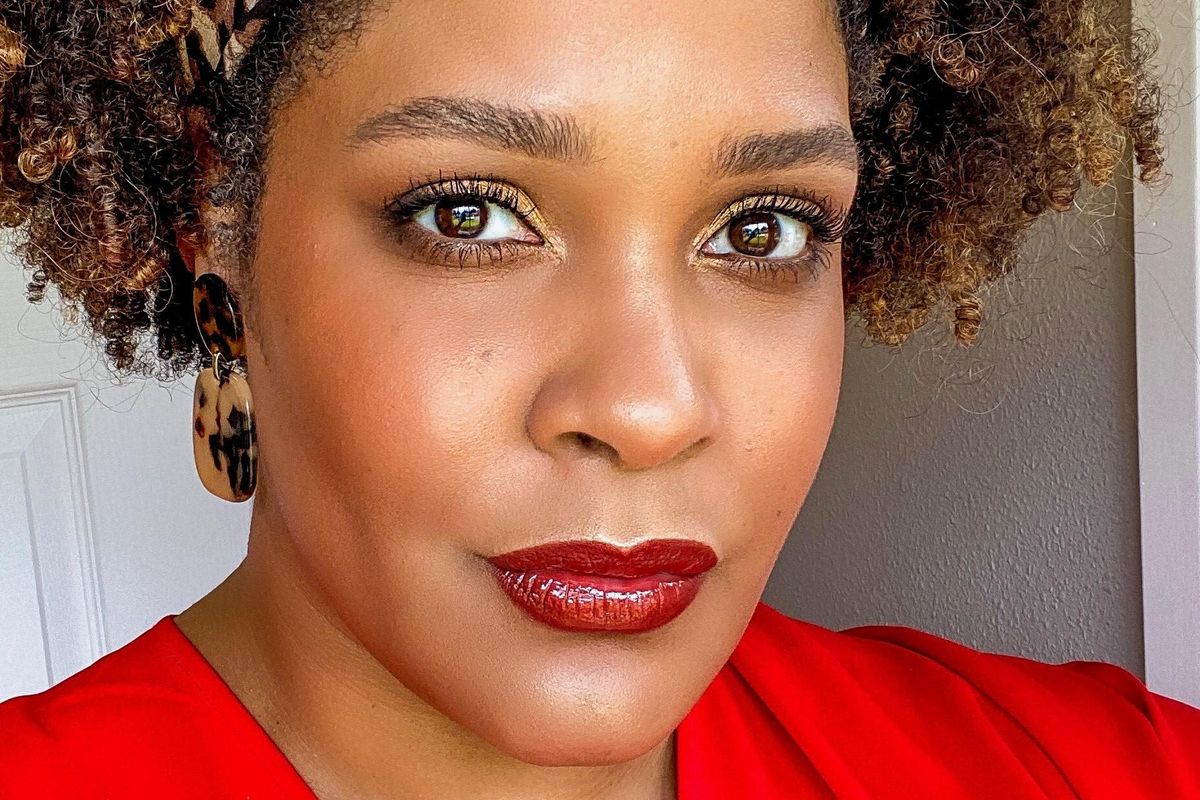 It's unequivocally clear that Ijeoma Oluo is one of the most prolific writers on race and identity of our time. If you haven't read her #1 New York Times bestseller, So You Want to Talk about Race, you've probably read her writing in The Establishment or The Guardian or come across one of her many viral Tweets cutting across social media.

She was named one of The Root's 100 Most Influential African Americans in 2017, one of The Most Influential People in Seattle by Seattle Magazine, among other distinctions, and now she's back with a new book that asks us to do more than just read it.

After identifying white male supremacy as America's oldest pyramid scheme in her last book, Oluo dives deeper into the havoc it has wrecked throughout generations in Mediocre: The Dangerous Legacy of White Male America, out now from Seal Press.

From William "Buffalo Bill" Cody and the decimation of Indigenous populations to the Great Migration and Great Depression right through our current state of electoral politics, higher education, housing policy and even professional football, Oluo highlights the nefarious nature of white male supremacy.

She examines how white male supremacy permeates and shapes almost every facet of our lives, and ultimately asks us to imagine a white manhood that is not based in the oppression of others.

PAPER caught up with Oluo over Zoom, one week before publication, to discuss her new book, the importance of being community-minded and much more.

When writer Sarah Hagi said, "Lord, give me the confidence of a mediocre white man," in 2015, it became the meme heard around the world. Was the seed of this book planted when this phrase became a part of our lexicon? Or did it boomerang back to you when you started writing this book a few years later?

Sarah [Hagi]'s Tweet did a lot to name a thing, which is vital. I want to give credit where credit is due. I think it became integrated immediately. We've talked about mediocre white men — especially if you're a woman of color who has worked with white men — forever, but I think stating it like that brings to mind the distinction. I wasn't thinking about that Tweet as the idea of the book came to me, but then when the title came, yes, absolutely. That's why it was important for me to quote her in the book, because it's important for us to know why it came into the lexicon.

White male mediocrity is very prevalent in history. What made you choose Buffalo Bill as the cultural example from the get-go?

I used to work in advertising for Chevy and my territory was the West. I had Montana, Wyoming, Washington, Alaska, Idaho and Oregon. I would spend a lot of time traveling in these areas. When I first stumbled upon the [Buffalo Bill Center of the West], I was astounded by its grandeur. But you can tell when the mythology isn't built for you, even when they're talking about you: they're talking about the Zulu warriors and there are costumes, but you recognize that that mythology isn't for you. You can't relate to any of it. There are multiple versions of towns named after William Cody in places like Montana and Wyoming. There are restaurants, theaters — everything — named after him. You walk through the museum and realize that this racist guy is the epitome of manhood [there]. When you're a Black woman, you can see it. To see this small space dedicated to the decimation of the Buffalo and extreme devastation to the Native populations, it stayed with me. I knew I was going to write that chapter from the start.

Oh, yeah. What I've noticed, especially when writing this book, is that these white men — especially because of the idea that they're supposed to be great — build this narrative of struggling to overcome great hardship, and the things that keep them from accepting responsibility are all externally based. It ends up building this incredible sensitivity. But also, it becomes an identity built on being an edgy outsider. But who's an edgy white male comedian? They're all saying the same bullshit.

It's literally the same "fuck political correctness!!!!!!!!!!!!!!!" joke over and over just wearing a different masquerade mask.

[Laughs] Yeah, it's not edgy if everyone's doing it. The reason that we see it more in "progressive" white men is because that's where their identity lies — being good, being an ally — especially with white male comedians. Their identity also lies in being "cool" with people of color, and being so "cool" with women that they can call them cunts and no one cares. And so they think they're the exception to accountability.

And so any criticism becomes a threat to that identity.

Right. It's like, comedy is sacred and therefore you can't say anything to criticize it. Also, jokes are just words and words don't matter. But notice they matter the moment you start criticizing the joke.

It's a matter of fact that Black women have always historically voted for the benefit of everyone — like thwarting Roy Moore, who was accused of sexual misconduct, from winning the Alabama Senate in 2017 — and saving us from rock bottom time and time again. And every time we hear "listen to Black women" in the 11th hour, when it's almost too late. The frequency of which we hear this phrase tells me we're not really listening. What'll it take to recognize Black women — and other women of color — as innovators and leaders?

It's important to recognize what Black women have done — and not just saving this country from its worst instincts over and over again. That's not why we do it. Look at what we've done to maintain ourselves, our families and our communities in the face of extreme hardship. Recognize that it doesn't mean that we will do it for you, but it means that if you want to have that in your communities, then you have to support and respect us and learn from what we're doing. Look at what you can incorporate into your own culture. What can you do to reduce harm and remove the barriers that are stopping us from effectively caring for ourselves and our communities? We also need White America to recognize our talents to truly benefit from them. But we have to be able to benefit from them before White America can. Right now, White America doesn't seem interested in making sure we benefit first. They think we will be the drivers of change and then the trickled-down recipients of that change.

"White women can't have true liberation without deconstructing anti-Blackness. Racism upholds white patriarchy, just as much as sexism does."

They're essentially telling us that once we change everything, they'll get around to making sure we benefit from the changes they expect us to make. What needs to happen instead is that we need to be empowered to make the changes we know we need for our communities and that means not only getting out of our way, but reducing harm. Then you can choose what you want to incorporate in your own community and/or where you want to work with us, but it's not going to happen without us. And that's something I would say especially of white women. White women can't have true liberation without deconstructing anti-Blackness. Racism upholds white patriarchy, just as much as sexism does. That means white women have to know that their own liberation as women is tied to Black liberation.

In writer Katherine Morgan's recent piece for Bitch entitled "White Rage, White Guilt: How Long Do We Wait for White Women to Learn?", Morgan, also a bookseller, crafts a response to the overwhelming amount of white women who voted for Trump, even after buying anti-racist books in bulk. Are you worried that complicity is disguising itself as virtue-signaling?

I think that a lot of what we saw in May and June wasn't people showing up because they wanted to solve the problem. They didn't want to find out where they were complicit. They felt bad. The messaging was, "If you feel bad and spend a little time absorbing Black grief and pain by reading some books, you will feel better." I think that's what it was. That's not to say all of it was insincere. I do think a lot of people did the work and we've seen changes in our workplaces and school districts and how we fund police in some cities. But I do think a large segment is still showing up and asking for the thing that will make them stop feeling upset because they don't want to feel what we feel every day.

I think the pandemic played a role, too.

"I would say this especially to Black women: know that you have the right to support. And even if you're not getting the support you need, know that you deserve it."

In the Acknowledgements, you noted the toll writing this book took. What are you doing to take care of yourself now that the book is out in the world?

That would be a great question if I had the chance. [Laughs] When I finished the book, I was like, "Cool, it's done. Let's take a deep breath." And then our house burned down. So, it was like, maybe not now. Maybe later. Right now, though, I will say that I have beautiful support. And I would say this especially to Black women: know that you have the right to support. And even if you're not getting the support you need, know that you deserve it.

A lot of Black writers and editors have been in overdrive this year. What is your advice for these folks who don't have the privilege of going on a social media hiatus or even taking a break?

It is absolutely vital that we build connections with each other. We have to. This society wants to deny what is in our nature, which I believe is to be community-minded and focused. I think that is integral to Black culture and other communities of color. We can't hold up the world. We have to ask for help and community. We need some time to laugh and reach out to each other, because no one else is going to do that for us. We need to prioritize that. We are more important than white supremacy. And no one needs to hear that more than Black women. We are not the martyrs in this story. We are not the nursemaids in this story. We are what we're fighting for.

Mediocre: The Dangerous Legacy of White Male America is available for purchase here.

Greg Mania is the author of the memoir, Born to Be Public.