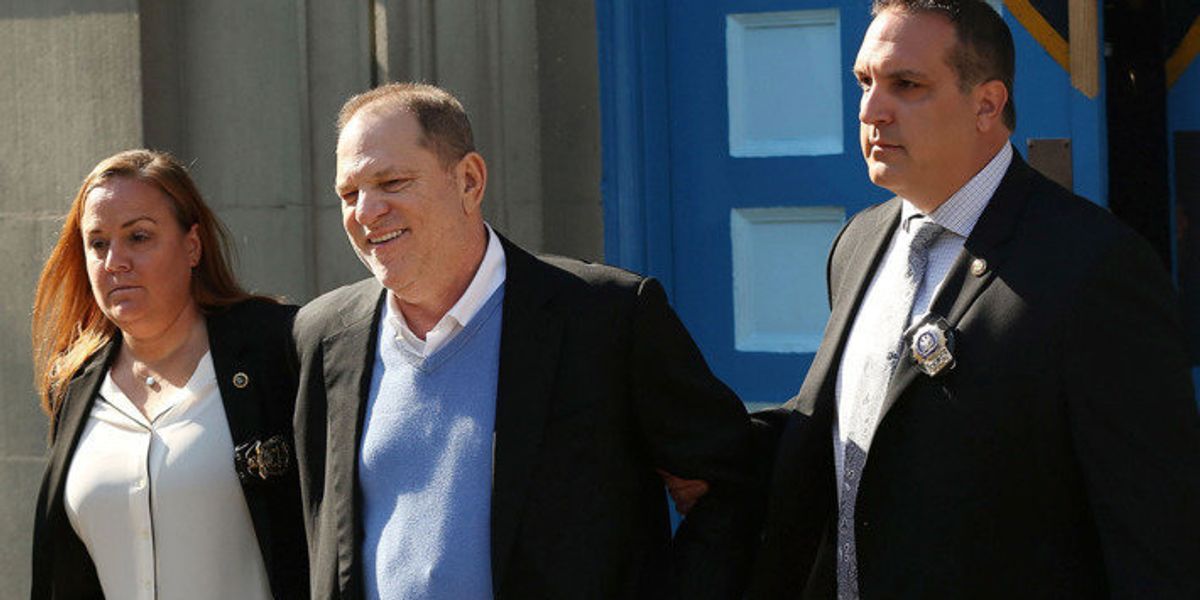 Watching Harvey Weinstein emerge from a New York precinct in handcuffs (albeit with a smug smile on his face) last week was an exciting moment for many who have followed his downfall, but for Weinstein's accusers his arrest seemed to be an anticlimax.

Related | Harvey Weinstein Has Been Arrested in New York

Taking to Twitter to express their mixed emotions, multiple actresses allegedly abused by Weinstein claimed the law finally catching up with him did not leave them feeling "celebratory," especially considering Weinstein was released on $1 million bail with a monitoring device. Annabella Sciorra was one of the first women to go on the record about Harvey Weinstein, who she claims raped her in the 90s, and began a thread last night to reveal her reaction to Weinstein's return to the public eye.

"The law finally caught up with Harvey Weinstein on Friday and charged him with multiple counts of rape and sexual assault. But nothing about that felt celebratory to me," she tweeted. "The smirk on his face as he was led out of the police station in cuffs made me physically sick. The public statement from his lawyer was intended only to denigrate all the brave women who came forward and spoke out against him."

She continued: "And I got no relief from seeing this monster walk into court, then sneak out the back door after posting a million dollar bond. All that says is, money buys VIP treatment in the justice system no matter how serious or violent the crimes. If there was truly 'equal justice under the law,' Harvey Weinstein would be behind bars in Rikers today, waiting for his own day in court, not free to roam New York, his other hunting ground, wearing an ankle bracelet."

Fellow actress and Weinstein accuser, Mira Sorvino, revealed on the same platform that Sciorra's words resonated with her. "I feel the same way, there was no jubilation although I was heartened that he was starting the process of standing trial."

@AnnabellSciorra This thread is so important. I feel the same way, there was no jubilation although I was heartened… https://t.co/HBAnT4mnA4
— Mira Sorvino (@Mira Sorvino)1527441565.0

Ashley Judd, who is in the process of suing Weinstein for defamation, felt differently, calling Weinstein's arrest a "watershed event."

"That Harvey Weinstein, a powerful man who thrived and flourished as he shattered and abused women in a culture of impunity was arrested and charged is resoundingly significant. It is a watershed event, an irreversible pivot away from tacit and explicit license to exploit to clarity about unacceptable behavior no longer being tolerated," she wrote. "Today, these images of Harvey in handcuffs are possible because of the voices, backbone, & determination, in spite of the unknown & retaliation, demonstrated by survivors & the journalists who reported our stories."

Weinstein's attorney released a statement prior to the movie mogul's arrest telling the Wall Street Journal this month that "Mr. Weinstein has always maintained that he has never engaged in nonconsensual sexual acts." Over 90 women have come forward to claim Weinstein harassed or assaulted them.