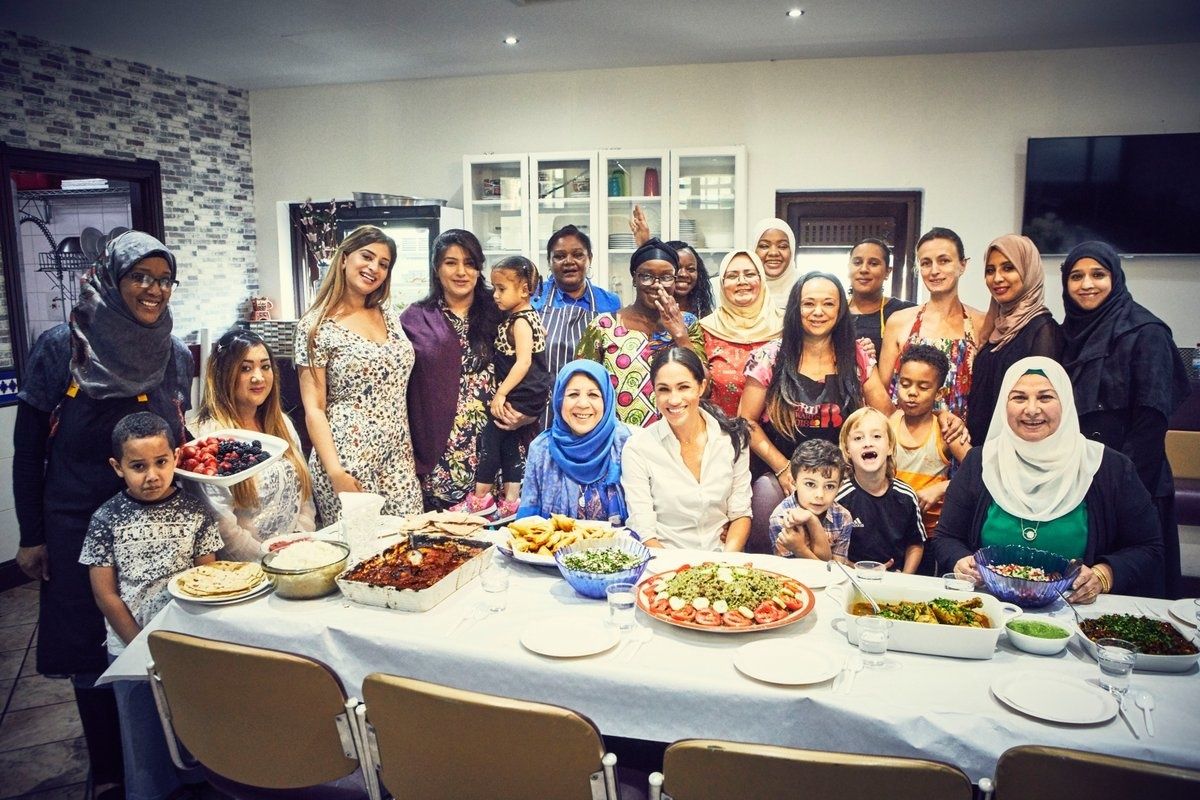 Last year, tragedy struck London after Grenfell Tower, a 24-story public housing high-rise, caught fire—trapping its residents inside, causing dozens of injuries, 72 fatalities, and leaving hundreds without a place to call home. The building originally had a 'stay put' fire policy, assuring residents that it would be safer to remain in their own flats if a fire broke out, but the policy that was intended to keep people safe failed after a freezer caught fire and spread rapidly throughout the complex within minutes.

The fire became the deadliest the UK had seen since 1988 and left families to deal with a devastation that they had not planned for—and now, almost a year later, residents are still working to piece their community back together. Amongst the many charities and donations created for victims, celebrities also stepped in to lend a helping hand, including Simon Cowell, Marcus Mumford, Adel and now Meghan Markle.

Early this morning, Kensington Palace announced that Markle's first solo royal charitable act as Duchess will be the release of a cookbook. The press release explains that Markle was drawn to the group of women who had come together after the incident and created Hubb Community Kitchen, a place where people could "gather and prepare fresh food for their families and neighbors, as a way of helping the community to connect, heal and look forward, and to convene through food."

Related | Hashtag Graveyard: How to Stop a Movement From Dying

Inspired by the women who came together in a time of struggle and hardship, Markle stepped in last January and has since been privately working with them to create Together: Our Community Kitchen, a cookbook featuring 50 unique recipes created by the Grenfell women who all hail from diverse backgrounds. Homemade dishes passed down through generations epitomize the contents of the text, all of which blend recipes and dishes together from various regions including the Middle East, North Africa, and East Mediterranean.

The Duchess of Sussex is supporting a new charity cookbook, 'Together: Our Community Cookbook', which celebrates th… https://t.co/b1xxoJ5n6x
— Kensington Palace (@Kensington Palace)1537174853.0

United by their passion for food and cooking as a way of strengthening communities, The Duchess of Sussex and the w… https://t.co/BznVKNTBWM
— Kensington Palace (@Kensington Palace)1537175310.0

In the opening statement of the book, Markle writes, "I immediately felt connected to this community kitchen; it is a place for women to laugh, grieve, cry and cook together. Melding cultural identities under a shared roof, it creates a space to feel a sense of normalcy—in its simplest form, the universal need to connect, nurture, and commune through food, through crisis or joy—something we can all relate to." All profits earned from the cookbook will be donated to the kitchen so it can "stay open and thrive, so it can widen its reach to others in the community and beyond."

United by their passion for food and cooking as a way of strengthening communities, The Duchess of Sussex and the w… https://t.co/BznVKNTBWM
— Kensington Palace (@Kensington Palace)1537175310.0

Following the announcement of Markle's chosen charitable endeavor, there has been a flood of positive buzz circulating social media channels, including shoutouts from celeb friends like Serena Williams and Abigail Spencer.

I used to call you Meghan (and I still do) but dear Duchess of Sussex your first project “Together” a cookbook brin… https://t.co/PLiSS4Vxnv
— Serena Williams (@Serena Williams)1537188371.0

My dear Meghan Duchess of Sussex brought her love of food & empowering women TOGETHER to create a cookbook that not… https://t.co/7rOqCrCy7x
— Abigail Spencer (@Abigail Spencer)1537198468.0