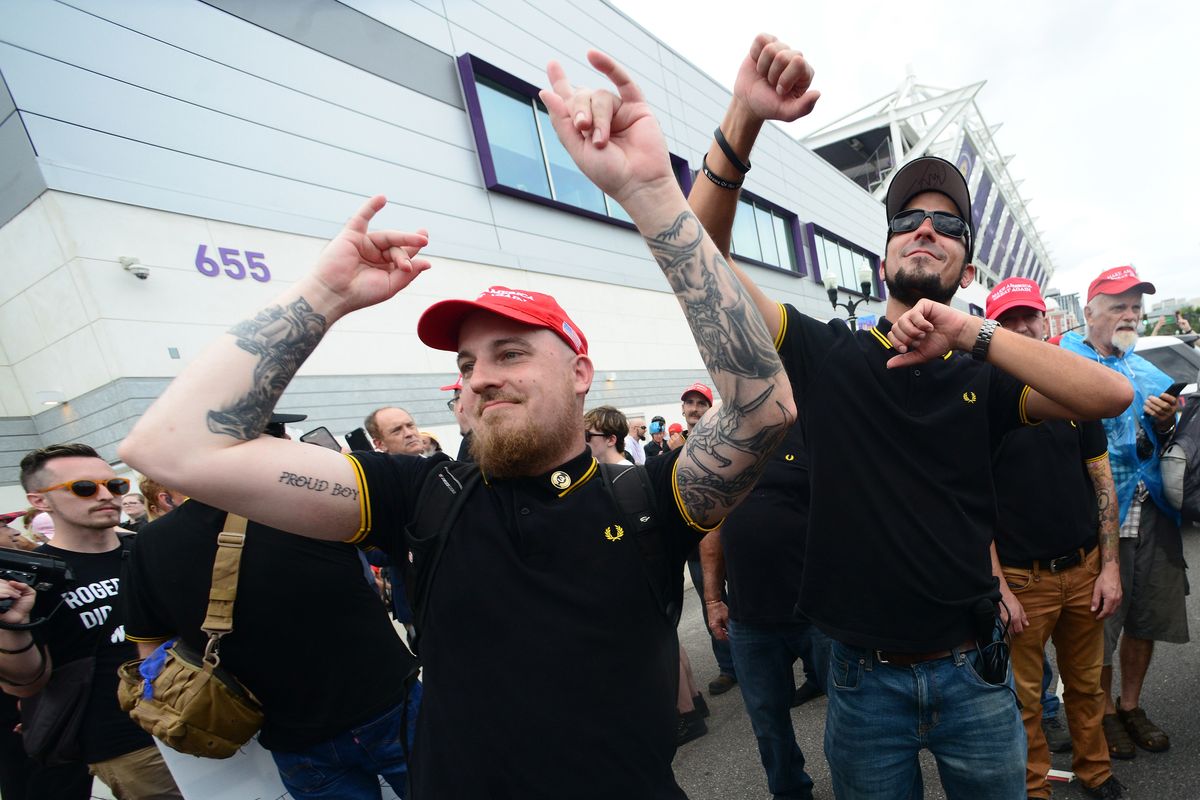 A quick trip to British label Fred Perry's website will tell you all that you ever needed to know about the clothing brand. Divided into four categories spread across the top of the home page, "Men," "Women," "Subculture" and "Tennis," Fred Perry has become synonymous with its polos. Founded in 1952 by the tennis player of the same name, Fred Perry has always been keen on celebrating the various ways their signature garment has been adopted outside of its original sporty context from punk to reggae, hip hop and basically any other sort of counter-culture scene that's flirted with a preppy look. Fred Perry has been welcoming to all kinds of subcultures that have embraced their clothes, with one very important exception.

Fred Perry has released a statement announcing that they will no longer sell its Black/ Yellow/ Yellow twin-stripe shirt in North America after it became an unofficial uniform by far-right hate group, the Proud Boys. The polo was initially adopted by the Proud Boys because of the shared color scheme and similarities between the hate group's use of a laurel wreath in their imagery and the Fred Perry logo. Usually accessorized with a MAGA hat, the polo's popularity among the racist, neo-fascist organization has pushed Fred Perry to take action.

Fred Perry does not support and is in no way affiliated with the Proud Boys. Read our statement here.
— Fred Perry (@Fred Perry)1601029496.0

"Fred Perry does not support and is in no way affiliated with the Proud Boys," the brand said in a statement. "It is incredibly frustrating that this group has appropriated our Black/ Yellow/ Yellow twin tipped shirt and subverted our Laurel Wreath to their own ends."

Wholeheartedly condemning and publicly disavowing any connection to hate group, Fred Perry goes on to underscore the shirt's importance in various subcultural movements and how this recent co-opting of that image dishonors that very legacy. "We are proud of its lineage and what the Laurel Wreath has represented for over 65 years: inclusivity, diversity and independence. The Black/ Yellow/ Yellow twin tipped shirt has been an important part of that uniform since its introduction in the late 70s, and has been adopted generation after generation by various subcultures, without prejudice."

Fred Perry goes on to add that they have been working with their lawyers to pursue any unlawful use of their brand, adding that until they are satisfied that the polo's association with the Proud Boys has ended they won't be bringing it back. Ironically, in the UK the exact same polo colorway has already been the shirt of choice for anti-fascist Skinheads for quite some time.

Making sure everyone was crystal clear on where Fred Perry stands, the brand concluded their statement with a quote from their 2017 Chairman, John Flynn. "Fred was the son of a working class socialist MP who became a world tennis champion at a time when tennis was an elitist sport. He started a business with a Jewish businessman from Eastern Europe. It's a shame we even have to answer questions like this. No, we don't support the ideals or the group that you speak of. It is counter to our beliefs and the people we work with."