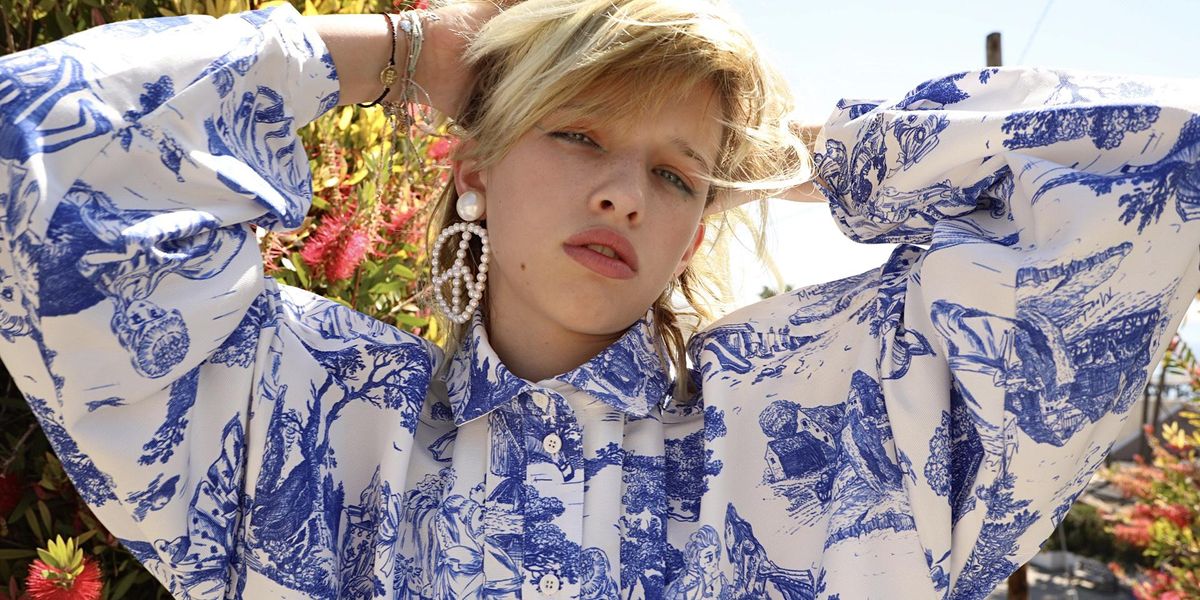 Ever Anderson Is Hollywood's Latest Force

Black Widow has been a long time coming. Marvel fans, both dedicated and casual, have been patiently awaiting the OG Avenger's origin story to play out on the big screen and finally, creators have delivered.

The film goes deep into Black Widow's backstory, showing everything from her first involvement with the KGB to the more tender moments during childhood and who better to don the Avenger's dual batons and handguns in her early years than breakout actress Ever Anderson?

"Black Widow is such an inspiration to me and so many girls my age," Anderson said. "It's just so exciting, and such a privilege to play young Natasha Romanoff."

Before her jump into the Marvel universe, Anderson had just one acting credit on her resume – Resident Evil: The Final Chapter, inspired by the video game franchise. And while she credits the movie as the first time she's been able to fully appreciate the acting experience, for Anderson, this is only the beginning.

The 13-year-old force is now in the process of filming Disney's latest adaptation of the Peter Pan story, called Peter and Wendy, where she'll be playing Wendy Darling — another "dream come true," she is sure to note.

Ahead of her movie releases, PAPER sat down with Anderson to talk Black Widow, Peter Pan and Wendy and what it's been like to work with such large-scale, iconic franchises this early in her career.

How did you initially get into acting?

I literally grew up on film sets, so I knew very early on that this is what I wanted to do. I would watch how my mom would get to act, giving life to a whole different person, and I wanted to be able to see out of the eyes of someone else, to be able to put myself in someone else's shoes. When I was five I told my mom that I wanted to act and she said that I had to learn to read and write before she would let me start auditioning. That I had to go to acting class and learn first. She thought that this would discourage me, but I surprised her! I did everything she asked and proved that I wouldn't quit.

How did you prepare for the role as Young Natasha?

I have been doing TKD (Taekwondo) since I was five so I feel like I've actually been training my whole life to play Natasha! I also did gymnastics to prepare because I had to learn to walk on my hands and I practiced my Russian as well as they added quite a lot of Russian dialogue into the script. I'm a huge fan of the MCU, so I re-watched all the movies as well!

Obviously The Avengers and the Marvel Cinematic Universe are so sacred to so many, so what was your experience like being the new kid on the block and working with huge names like Scarlett Johansson, Florence Pugh, David Harbour and Rachel Weisz?

I was so excited to meet everyone! It was truly a dream come true. I got to joke with David Harbour and Rachel Weisz and meet Scarlett Johansson! I was beyond starstruck and just super happy! They are all lovely and sweet people though. Honestly you never know what to expect when you meet people who are role models to you but they couldn't have been nicer or more supportive to work with.

Who is your favorite Avenger and why?

I would have to say Natasha, not being biased because I play young Nat haha, but I love that she doesn't have superpowers, she's just trained her whole life to be a badass and succeeded.

If you were a superhero, what would your powers be?

I would want the power of teleportation so I could get out of awkward situations.

Another huge project you have coming up is Peter Pan and Wendy in 2022. Are you in the process of filming that now? How's it coming along?

I am in the process of filming Peter Pan and Wendy, and I must say it is a dream come true. Everyone is so amazing to work with, I have become good friends with Alexander Molony who plays Peter and Joshua Pickering who plays John. And David Lowery is really one of the nicest directors ever.

There have been so many different adaptations of Peter Pan's story, so how does this project differ from ones that have been done in the past?

This one differs because the cast is so diverse, also it puts Wendy on an equal footing to Peter, she can fight and stand up for herself!

The jump from the Resident Evil franchise to the MCU and Disney is huge in terms of visibility for you as an actress. How has your experience differed since you booked Young Natasha and Wendy Darling?

I feel like I have been treated like a real actress on set playing Young Natasha and Wendy Darling as opposed to being a little kid acting in a movie with my dad directing. I know that I got these parts in Black Widow and Peter Pan and Wendy completely on my own. They saw that I work hard and felt I had the talent to play these roles so that makes me feel, you know... proud. I literally turned eight years old during the filming of RE so I was super young and don't remember my experience on set as well as the films I've done these last two years. But working with Marvel and Disney has been such an incredible experience. I feel like it's been life changing. Everyone has been so wonderful and we're all having so much fun filming together now! I mean it's wild how you get to make new friends, new memories and live a different life with each film you make.

Fans can head to theaters or stream Black Widow July 9.