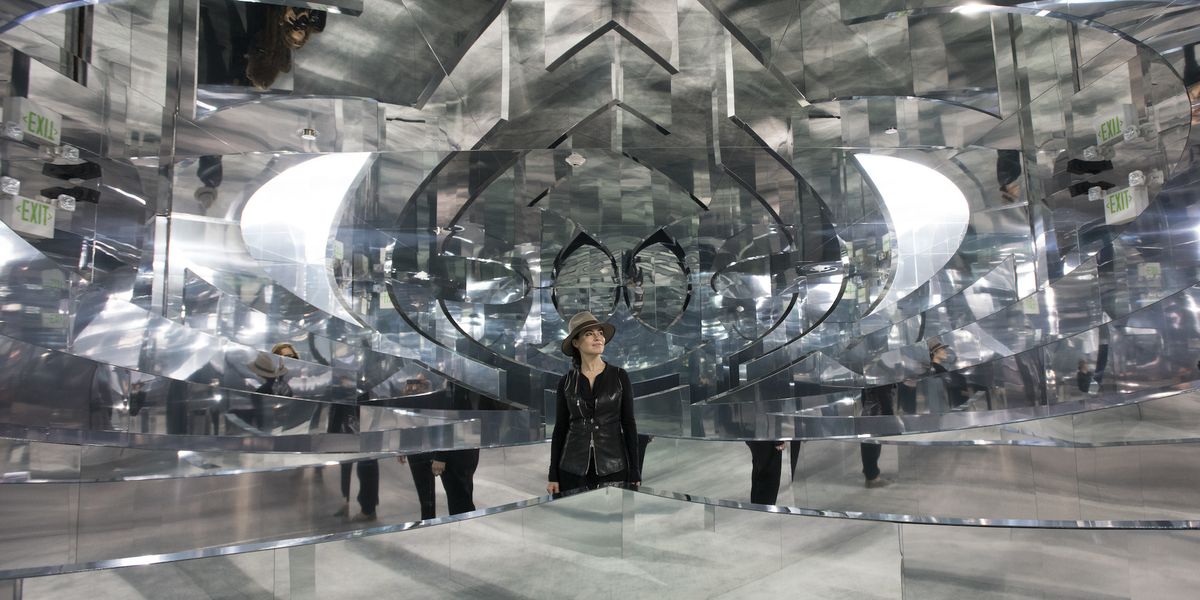 Talking to Es Devlin, the Artist Behind One of Art Basel's Coolest Installations

Art Basel Miami can be a pretty disorienting experience no matter whether you're a seasoned art fair attendee or coming to the festival and all the satellite fairs and parties for the first time. The frenzy of shows, which, in turn, each often have tens -- if not hundreds -- of galleries participating who, in turn, often are showing works by several different artists, is matched by the excess of parties, panels, activations, openings, concerts and more, all leading to a sense of endlessly running around with no final destination -- or rest -- in sight. This year, one of the most interesting pieces at Miami Art Week examined feelings of disorientation and dislocation, specifically through the lens of travel and hotel stays. Es Devlin's Room 2022 at EDITION, a massive, 7,000 square foot installation, explored the ways in which travelers "take part in a heroic act of collective imagination," as Devlin put it in the show's press release. "We all tacitly agree to suspend our disbelief and subscribe to the illusion that the walls between us are soundproof and life proof and that each room is its own isolated world that can be restored to order by invisible magic while we are out."

The show took guests on a journey through a series of hotel tropes (recreated hotel rooms and hotel hallways that also featured sound and light installations) before arriving at a colorful zoetrope and, finally, a spectacular Instagram-worthy maze featuring vaulted elliptical mirrors. While the final maze was a literal embodiment of disorientation and dislocation, the rest of the space -- particularly the uncanny hotel room and hallway recreations -- also spoke to Devlin's aforementioned desire to assess the suspension of disbelief all travelers must engage in. While the piece, which was presented by American Express, was Devlin's first in a hotel, the artist and stage designer (who has created sculptures and set pieces for superstars like Beyoncé, Kanye West and Adele as well as pieces for the Metropolitan Opera and the Royal Opera House) has often featured hotels in her works, including her 2006 production of Don Giovanni in Vienna, which set the opera in a hotel. We had the chance to chat with Devlin at EDITION to hear more about her intention behind Room 2022 and her surprising revelation about the audience she's actually creating art for.

The zoetrope inside Es Devlin's Room 2022 at EDITION; photo by Getty for American Express

I didn't initially realize just how big the installation is! How long did it take to install?

Three days. There was a wedding in here -- in fact, in the zoetrope of remembered layers of the lives that have gone on in this hotel, we put in a little clip of what we imagine that wedding was that just finished the moment before we started loading in our stuff. So people were getting married, people were having their party -- that energy left the room and a whole ton of people came in during the early hours of Sunday morning and they spent all day Sunday loading and filling this room with stuff and then they built it up on Monday and Tuesday and by Wednesday we were ready. So it was really just two and a half days building.

That's wild. Was this idea of dislocation and suspension of disbelief something you've been thinking about for a while or something you were particularly inspired after having the opportunity to create a site-specific piece inside a hotel?

I've spent twenty years mainly as a stage designer so what I've been doing is making structures, making sculptures, always as an act of translation -- often as a translation of a story or a drama or a piece of music and taking something that is quite abstract and translating it into something that is quite concrete. So that's what I've been doing so I have my 100,000 hours and it got to the point where I feel able to apply that same practice now to other things. So the hotel is something I'd been thinking about for 12 years because I'd been using it as a metaphor in the work; Don Giovanni is a character who famously in the piece sleeps with 1,275 women so [in the 2006 Vienna opera staging] we set it up that he lived in a hotel and every door was a potential life lived and the idea wasn't so much the women but it was more the imagination of who he could be if he was with that woman. So it was like, "What would I be like if I'd married her? What would I be like if I lived with her?" All those parallel lives I could've lived with those untried doors. So that was something I'd been exploring. And actually when I was invited to work here, it just became a fulcrum of all the ideas I'd been thinking about. I could have made any work in that room but the interesting thing is some people that have come through literally thought I used an actual hotel room -- they didn't realize it was built so there's been some fun dislocation.

Can you elaborate more on these ideas of disorientation and dislocation we experience throughout the piece?

I guess what I'm trying to say is there's a combination of disorientation and perfect orientation. When you wake up [in a hotel room], all you know is a line of light [coming through the window shade]. So on the one hand, you don't know anything but in a great way, on the other hand, you know all you need to know. Because you're not clouded with the fragmentary stuff that we're all going to get clouded with later in the day. So just to have a moment of absolute certainty -- and now, as I get older, I really cherish that moment and I lie there for some time. I try to sustain that -- I actively try to sustain the little limbic moment between consciousness and unconsciousness. [Those moments have] also come to me through reading my children's stories when I put them to bed. Because what happens is when I'm often quite tired and I feel the absolute urgency of reading my children a bedtime story every night, often I'm reading them quite boring stories and I get quite bored with the sound of my voice droning on. So I'm reading the story and I'm sort of falling asleep and I know that I'm hungry and I know that I need to eat my dinner because it's only 8 o'clock and my husband is cooking so I lie there and allow myself to just go into this state of pre-dinner sleep. And that's often a very meditative, fantastic space.

What I guess I'm trying to say is, if you take any social structure -- say, a hotel -- [and look at] what it takes for everyone to take part in the system, if any of us really stopped to think about it, if any of us really analyzed it and lay in our beds and drew the line in our own bed through the wall to the next or drew the line of the bath through to the next -- if anyone really stopped to consider it and thought, "Actually, this room isn't mine and of course there's a whole load of people disgusted at my disgusting underwear that they're picking up," I guess what I'm looking at it is to what extent we've absorbed an act of strenuous hard work of suppressing this information. And if we were to un-suppress that and if we were, instead, to have all that effort that we were using into not thinking about this and to take that effort instead and pour it down the throat of the architecture, what could it do? It's that kind of train of thought that I'm on.

The hallway inside Es Devlin's Room 2022 installation at EDITION; photo by Getty for American Express

Thinking of the light as a way to orient yourself makes me wonder whether in other instances we're losing that ability to feel comfortable in our surroundings and find our way without any technology or digital crutches. Are we losing that skill to rely on ourselves and our environments for cues?

There's a book you'd love by Yuval Harari called Homo Deus: [A Brief History of Tomorrow]. His first book is Sapiens and in Homo Deus he hypothesizes that in the future, instead of thinking that humans as a species are always evolving, we might discover that humans are actually the kind of husk or midwife of what has really been evolving all this time, which isn't humans at all but is the information. I feel that quite physically when I'm working on a concert and I see the audience and I realize the audience is actually the telephones and that the arm is attached to the algorithms -- the organic part of them -- because all we are is algorithms anyway and all we are is information in the DNA and [phones] are man-made algorithms. You often feel that [motioning to her arm] that this part's just a chaperone. So that's quite an interesting perspective.

Being in the mirror room and seeing everyone taking photos on their phones you realize that Instagram is the real audience of the installation.

It's this kind of compulsion to share. Often my responses to things are less intellectual than purely visual and when I look at a map of a human brain and when I look at a map of the Internet, I just see that they look the same. If you look at a map of the blood vessels through your hand and you look at a skeleton of a tree, the arterial system is governed by the same equation and all that. Yeah it may be that we're all just working as a collective brain and that information will be the thing that carries forward and we might look back in a few millennia and look at this period as the organic period. It's a terrifying thought but let's smile anyway.

Splash photo: Es Devlin inside the mirrored maze room included in her installation Room 2022 at EDITION; photo by Getty for American Express