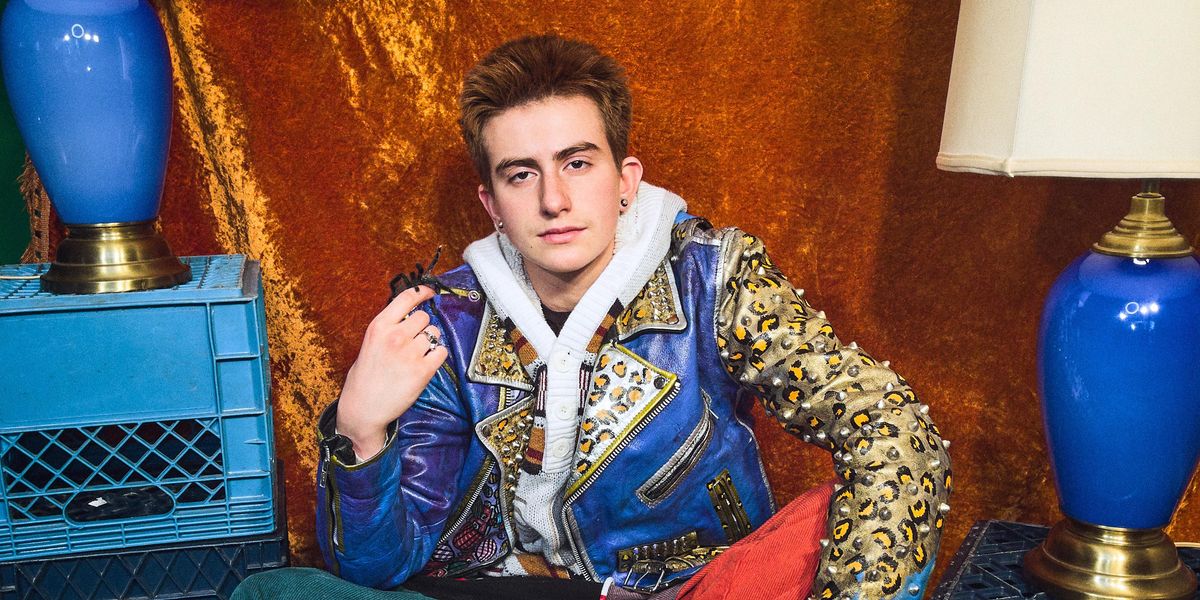 ElyOtto on the Algorithm and Autotune

Back in spring 2020, at the height of pandemic layoffs, Elliott Platt was let go of his job at a pet shop in Calgary, Canada. This meant fewer responsibilities for the young producer, who filled his free time finishing ideas for tracks in his bedroom while family was away. With no expectations, Platt uploaded them all to Soundcloud under the moniker ElyOtto. They were hyperactive, bursting through the ceiling of Platt's at-home boredom, and they quickly caught fire online.

"SugarCrash!" — a restless hyperpop cut about having no cash and half a brain — took off into the millions on TikTok, causing major labels to come clawing at Platt's door. RCA Records ultimately won the fight and ElyOtto went from an unemployed teenager's fever dream to a real viable pop project. And "Profane," out today, is his first new release off RCA — still self-written and self-produced, only with "a darker sound, less sweet" than previous singles.

"Profane," which Platt explains is "meta as hell," was written directly in response to the success of "SugarCrash!" — a song that saw him switch up his songwriting style to be more blunt, assuming no one would ever hear it. Of course, he was very wrong. "Went through the effort, I laced it with profanities," Platt sings on "Profane," referencing those lyrics about drugs and mental health. "Wasn't enough to keep it from the nursery."

Below, PAPER dives into ElyOtto's "Profane" and talks with the now 17-year-old breakout sensation about internet consumption, autotune and the algorithm.

How has your approach to making music changed since the extreme success of "SugarCrash!"?

Because music-making isn't just a hobby to me anymore, my approach to making it has changed in a few ways. Firstly, I can no longer just sit down and remix some obscure euro-pop ringtone. What I make has to be fresh, original and listenable. I guess I could say my focus has shifted to the sound of the finished product, rather than the process of making it.

From your perspective, what is "Profane" about?

Honestly, "Profane" is meta as hell. It's a direct response to "SugarCrash!" In the past, I'd always written my lyrics in this cryptic way that only I could understand. God forbid people hear it and worry about me. With "SugarCrash!" and other songs from Summer 2020 though, I had come to accept that my music would never gain a following substantial enough for anybody to pay attention to the lyrics. For this reason, I switched over to a much more blatant style of writing that didn't mind profanity and references to sensitive topics like suicide and drugs. Naturally, as soon as I did this the entire internet took "SugarCrash!" and ran with it. It's like as soon as I stopped caring who heard my music, everybody was listening.

"As soon as I stopped caring who heard my music, everybody was listening."

How does the rapid pace of internet consumption impact the way you think about creating a song?

It seems like there might be a few key aspects a song can use to combat the internet's short attention span: A strong rhythm, a recognizable melody and repeatable lyrics based around a widespread problem that people can relate to (and make TikToks with). While good to have in a song, these characteristics alone are not nearly enough to make anything worthwhile with. A lot of people who just don't get internet culture fail to recognize this, which is why we end up seeing these really awful attempts to latch onto a trend or appeal to the kids in ways that are just unbelievably pander-y and boring. Some of my songs are internet-friendly, yes, but that's because it's what I want to hear, not because I'm desperate to appeal to the masses.

What're your thoughts on genres? Do you limit yourself to one label or is that the enemy?

Genres are fine if you're big into listening to music, but since it's become a career for me, I find that it just doesn't matter anymore. I make pop music. Sometimes it's sweet flashy runway pop, other times its evil crusty I've-been-dead-since-1836 pop. It's not my problem — the most interesting stuff exists in liminality to genres, anyways.

Are you still creating all this music from your bedroom in Canada?

Nope, I've moved to a very hi-tech recording facility known as my mom's garage. I have my own desk and everything.

The algorithm helped launch your success. For many artists though, it's an impossible pain in the ass. What're your thoughts on it?

The algorithm really freaks me out, to be honest. I think if we tried to explain it to somebody from the past, they would be horrified by how easily we've come to accept something so reminiscent of cosmic horror sci-fi. Furthermore, I think many creators, without realizing it, have come to view the algorithm as a sort of artificial deity. It has the power to reward and punish us according to how devoted we are to making relevant content, which is super creepy. Regardless, I think we need to let go of the underlying belief that social media is a contest — it's not. We're all just in this to have fun and we shouldn't let the algorithm take control of that.

Can we pretend that airplanes in the night sky are like shootin' stars?

You've already had Kim Petras hop on a track. Who would be the dream collaborators to remix "Profane"?

Personally, I don't think profane needs a remix. It's good on its own. As for the other songs on my upcoming EP, we'll see.

Is autotune good or bad? Make your defense.

Autotune is great, but it makes me super sad when people assume that I'm using it as a crutch. I wish more mainstream artists were transparent about their use of it, so people would realize that it's a fun tool and has nothing to do with how somebody's voice sounds naturally.

Do your pet geckos like your music? Do you test tracks on them?

[If] you're talking about Freddie, my gecko, he doesn't know about the whole music thing. I can't tell him, it would ruin his perception of me. Pippa, my other gecko, on the other hand, loves my music and pop music in general. We might collaborate.

Where, in your wildest dreams, would your music career go into the future?

I want to jam with people on the street by day and host raves by night. I want to save lives with my music.