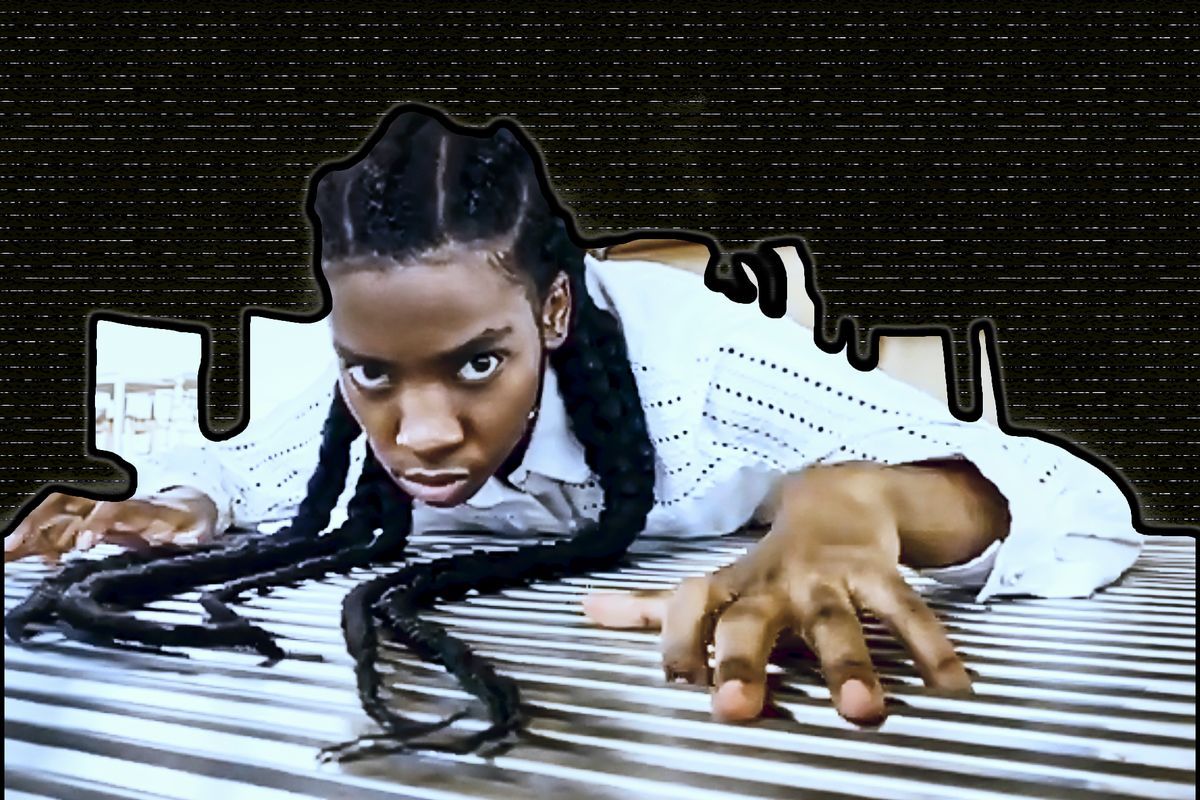 Dua Saleh Is Your Angel and Your Devil

Dua Saleh was stung by a scorpion when they were three years old, shortly before their family relocated from Eritrea to the United States. "The dramatic, theatrical part of me is probably being fueled by that scorpion," they chuckle over the phone. The artist and performer, now based in Minneapolis, is also a Scorpio by birth — displaying the sign's signature traits of determination, imagination and intelligence. With a histrionic flair: Saleh's alter ego, Lucifer LaBelle, is named after "the fallen angel Lucifer and Patti LaBelle."

Saleh has steadily gained momentum since releasing their debut EP, Nūr, in January 2019. Their debut revealed a versatile artist in perpetual motion, and the follow up, Rosetta, just dropped on Friday. Formerly an organizer, they're "constantly trying their hardest" to get back to the movement in the best ways I can as an artist." A little over a year since the revolution in Sudan was ignited, and with Minneapolis in the eye of our current uprising against police brutality, Saleh's new songs form a radical backdrop to an unrecognizable historical moment.

You're a singer, a poet and organizer. How do these different disciplines interact and inform one another?

I was formerly an organizer — I feel like I'm trying my hardest to get back to the movement in the best ways I can as an artist, and what I have to offer are hypervisibility and funds. What I recently did was drop a song called "body cast;" it was a song I wrote in 2019 while I was lamenting the murders of Jamar Clark and Philando Castile, still. I was also anxious about the surveillance that was happening to Black youth in the city. I was in a weird headspace when I wrote it but I decided to release it this year to raise funds for an organization called Women For Political Change in Minnesota that works with Black trans youth, Black women and Black queer youth.

What future do you want for yourself and for the people?

I want a world where people don't have to think about the sociopolitical implications of their existence. It gets so exhausting to think about yourself in relationship to power. Sometimes you just want to fucking watch Netflix and not think about violence, but it's hard to do that. Even when I'm trying to unwind, I'll be watching a show or I'll be watching anime and something will happen, there will be fatphobia or homophobia or there will be transmisogyny I see and then I'm taken out of this healing realm that I'm in.

You have an alter ego named Lucifer. Can you tell me more about them?

My alter-ego is Lucifer LaBelle, which is named after the fallen angel Lucifer and Patti LaBelle. The song "hellbound" is a song that is sociopolitical satire about religious institutions that have told me I'm going to hell because I'm queer. And Lucifer LaBelle is kind of like this anti-hero that is braggadocious about his queerness and his transness and is kind of playing with different concepts. His sexual escapades, sexual allure and hellfire, and imagery that people would associate with sinning.

A lot of those things have occurred in ways that are far more violent than Lucifer LaBelle is alluding to. In Lucifer LaBelle's realm, he's referring to consensual sexual escapades and people finding allure in his words and his critique of institutions. He's making fun of institutions. Like the Catholic church is violent, pedophilia is rampant and it's far more violent than anything Lucifer has ever offered to the table. Or there's in Islam, I'm just going to speak from my experience... conversion efforts, trying to eliminate the queerness in people and stifling people's identities in order for people to be indoctrinated in alignment with people's personal ideology or their interpretation of what the text may be and not that of the actual text. It's not that Lucifer LaBelle talks about those things explicitly, but those are just things I'm bringing about because Lucifer LaBelle is playfully addressing these things that I have personally been targeted with. Religious institutions have targeted my people, trans and queer Black people, but those religious institutions and the people within them have practiced violence.

"I want a world where people don't have to think about the sociopolitical implications of their existence."

Is your idea of the afterlife driven by Islam, or your interpretation of Islam?

The reason I ask about the afterlife is because of what you said about Lucifer and how people shun queer people to hell. If you don't care about what happens, what is the function of Lucifer?

It's a critique of people believing they know what would happen to my spirit after I leave this realm because nobody knows what's going to happen to them. All these religious people could be manifesting their fate into the afterlife by trying to point their fingers at everybody else. I try to focus on the ways that I can nourish those around me and myself through love and faith in tangible realities, and not worrying about what is going to happen after and where people should be placed in an organized fashion.

The thing that grounds me the most is community. Even with all the qualms that I have with family members, my family is very important to me to feel full in my humanity. That's both chosen family and people within my bloodline. People that understand me, that I can speak in Sudani Arabic with. Nonbinary people that I can talk to, who I don't have to explain my gender and my pronouns to, where I can just shut off my brain and not have to be cautious about how I'm approaching conversations.

Do parts of your creative identity or overall identity do you think become so legible to the masses that it catapults you into hypervisibility and more surveillance? Does it feel voyeuristic?

I feel like I've been feeling it more intensely as of recently, but I've always felt it. Being Muslim, being Black, being Sudani, being from Minneapolis because of Black youth and community igniting uprising. It already felt voyeuristic prior to things happening, and the pace that they have been happening with uprisings in relation to my multiple hometowns.

People are so infatuated with transness and infatuated with the idea of nonbinary identity and non-gender specific existence. Two of the first people who tried to manage me, the first few questions they asked were about my genitals because they didn't know if I was FTM or MTF and they were speculating a lot about sexuality. Before I was even thinking about resistance movements, there was already a level of fear I had of voyeurism. I even asked a writer, I won't mention the publication, but I asked them if there was a way for me to make momentum as an artist just based on my music and not based on tokenization. They said, "I don't think so," and hearing that was terrifying.

Your music has really evolved. How would you describe your sound?

I'm not quite sure what my sound is. I feel like with each project I try to have some cohesion with the flow of each song. In the Nūr EP, there was more of an R&B pop and hip hop element that flowed through all of the songs. In Rosetta, the main sound that me and Psymun, the executive producer, noticed was a rock-infused streamline. Even though there were other elements like hip hop and pop and R&B. Because there was a rock streamline throughout it, it made me think about Sister Rosetta Tharpe, who was credited as the inventor of rock and roll, and who inspired people who came after her like Little Richard and Chuck Berry.

Whenever I talk to you, you sound so quiet. But when I watch your videos it feels like I'm watching a whole different person. How do you do that? Where does that come from?

I think it comes from my brief background in theater. I first started directing and acting in my own work in 2017. I gained a lot of traction because for some reason people liked my theater style. I tapped into those theater skills and used it in my stage performance. Lucifer LaBelle is a theater-inspired character.

Me being a dramatic Scorpio also influenced my interest in theater and theatrical song performances, and the extra energy I got from it. I got stung by a scorpion when I was three years old. That is something the dramatic, theatrical, part of me is probably being fueled by that scorpion.