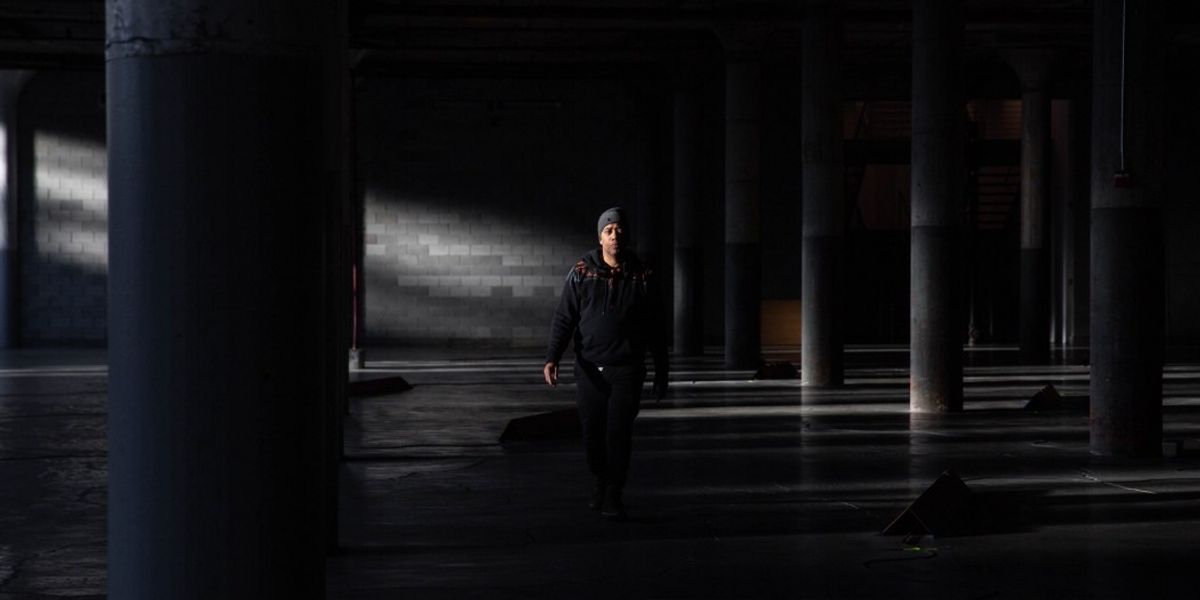 Partying in the Basement of Dia Beacon With Carl Craig

One weekend, "godfather" of Detroit techno Carl Craig might entertain hallucinating revelers till sun-up at an Ibiza club. During another, this past Saturday, he found himself performing at Dia Beacon, one New York's most distinguished conceptual art museums.

Dia is a museum beloved and sometimes teased for its dedication to minimalist and abstract art. Most New Yorkers, at some point, will make the Hudson valley pilgrimage up to the absurdly charming town of Beacon, to wander through Richard Serra's tankards, make a snide comment about Robert Ryman's monochromatic canvasses, and take a selfie with a Dan Flavin.

The occasion for Craig's journey to Dia was a commissioned sound installation called "Party/After-Party," inaugurated with a special performance. The piece marks one of techno's most prolific and influential producers' first foray into the art world. Coming up in Detroit during the '80s and '90s techno heyday, Craig helped found the city's famous scene, as well as the label Planet E Communications (Kevin Saunderson, Moodymann, Kenny Larkin) and the Detroit Electronic Music Festival (now known as Movement). These days, he spends his time throwing dance parties all over the world.

It's a logical collaboration, given modular repetition is key both to Craig's medium, and plenty of the minimalist exhibits on display upstairs. "Techno's history was molded by the unique technological and aesthetic conditions at the outset of Minimalism," explains Dia's statement on "Party/After-Party." "Artists working in both sound-based forms share a foundational interest in reflecting and repurposing the industrial soundscapes of urban environments."

Art theory aside, there's definitely overlap between Donald Judd fans and technoheads. All afternoon on Saturday, stylish attendees fresh off Metro North flooded into Craig's soundscape, which filled the parking garage-like lower level of Dia. Craig took the stage at DJ decks erected in the middle of the vast basement room around 7:30PM. While the set time was probably early for Craig, the setting wasn't particularly out of the ordinary. Techno was born in industrial building bellies and warehouses; Dia Beacon is housed in a refurbished Nabisco packaging plant.

"When you step into this vast space," Craig says. "It is like stepping into a reflection of my own mind. The stark parallels between this postindustrial space at Dia and the architecture in my hometown of Detroit, a place that has always catalyzed my creativity, are fascinating to me."

Curator Kelly Kivland adds, "The Nabisco packaging factory that now houses Dia:Beacon and the postindustrial transition of the town of Beacon itself both evoke, historically and architecturally, Craig's native Detroit — the birthplace of techno — and inspired him to imagine a space that activates these parallels."

Eccentric-looking curators (a few of their tweens in tow), professor types and baseball capped sound art buffs nodded their heads cooly as Craig opened his set on dissonant, mellow notes. The slow-building performance was intended to conjure "the euphoria of the club" well as "the loneliness that follows." Puffers were shed as the set geared up. Tote bags hindered everyone's dancing. A few inspired attendees didn't hold back, gyrating through the whole set, though Craig seemed to withhold danceable rhythms, interrupting his own beats with disorienting lapses of dissonant noise. This stop-and-start quality was meant to reflect Craig's own memory, as well as a hearing condition that shapes many DJs and clubgoers realities.

"The work itself is a reflection of my reality — the visual, sonic, and emotional connections or disconnections that I have experienced over the past thirty years as a DJ on the road," Craig explains. "In contrast to the glamorous perception of the touring musician, I wanted to reflect the isolation of the many hours spent alone in hotel rooms and the tinnitus that I, and many other artists, have to contend with as a result of our work...when you step into this vast space, it is like stepping into a reflection of my own mind."

Related | The Case of the $120k Basel Banana

It was an illuminating night, surely both for Craig's fans visiting Dia for the first time, and the museum's members who checked out "Party/After-Party" and the performance on a whim. Even, he says, for Craig himself. "This project at Dia has allowed me to explore a new scope of what I can achieve with my music."