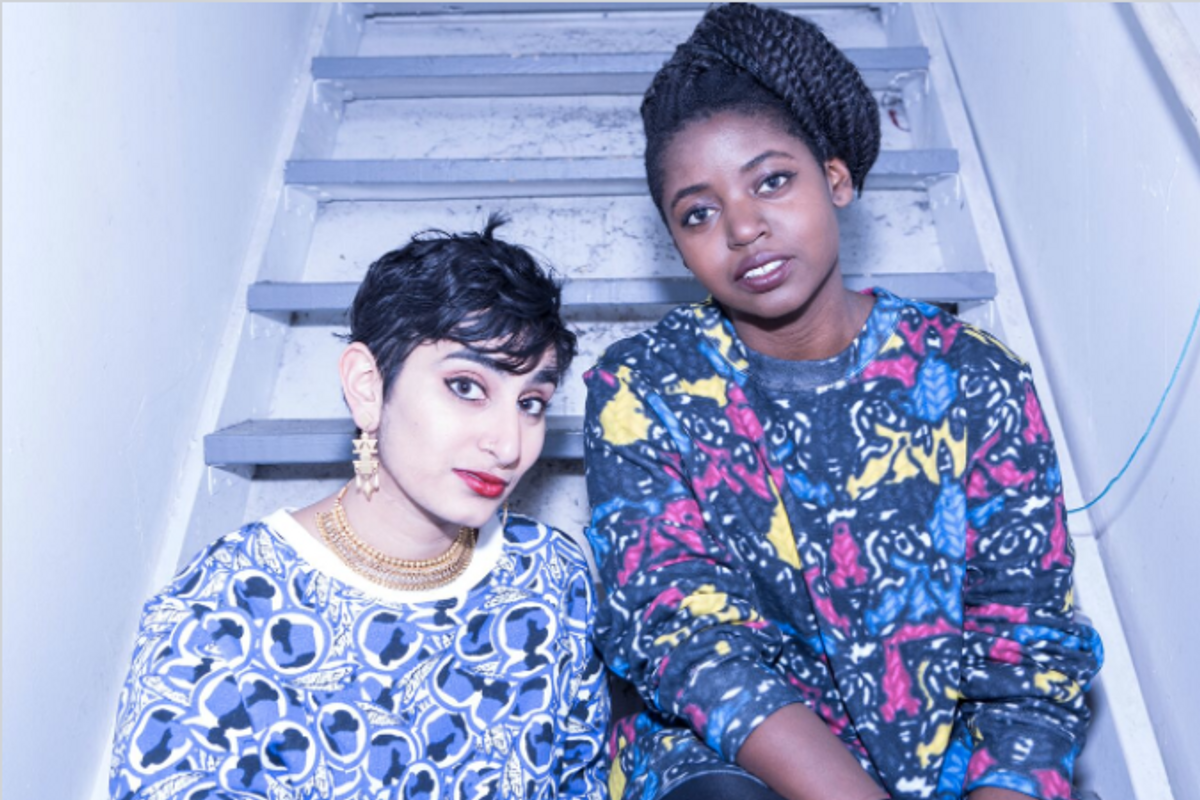 In the landscape of countless TV shows that either whitewash their characters of color or expect them to fulfill racist stereotypes, Chicago-based writer Fatima Asghar and director Sam Bailey created the radical web series Brown Girls, which premiered online this past March. The show depicts friendships between women and queer people of color, exploring their cultural backgrounds without reducing characters to their different identities. In the world of Brown Girls, Leila is a South Asian Muslim writer who regularly makes roti out of Trader Joe's pizza dough and is learning to understand her queerness, her friendships, and her family. Her best friend Patricia is a black musician celebrating her sexual agency and independence while also exploring her vulnerability. Bailey and Asghar create characters who are complex, confused, hypocritical, loving, and always valued. 'Brown Girls' shows us the beauty of people of color sharing their own stories.

We chatted with Bailey and Asghar about the radical potential of friendship, the complexities of diaspora, and why it's important to let characters make mistakes.

PAPER: How does the web series platform sculpt the kinds of stories you tell and the audiences you reach?

Bailey: Web series even the playing field for filmmakers. Filmmaking is a daunting medium to work in. It wasn't until I saw other web series like Awkward Black Girl, The Couple, and even Broad City to a certain extent, that I felt I could have an idea and get it to the masses without outside influences tainting it. I had done a web series before Brown Girls called You're So Talented, so when Fati approached me with the Brown Girls script, I felt really comfortable in the medium and I was like, "It makes sense that we do it, and we do it our own way with our community so people don't water down the story that we want to tell."

Asghar: There's a lot of play and experimentation that comes with a form like a web series. In Brown Girls, all of the episodes are different lengths because I wasn't trying to hit a certain length. I was trying to tell the story until it was done in every episode. I think that's pretty cool because you can approach storytelling differently.

I read one of you talking about the messiness of life and how friendship allows space for that, and I'm curious about how you made space for that messiness in the show, and if the differing episode lengths relates to that?

Bailey: The characters get to be messy. The series itself isn't messy. There's much care put into it. Fati and I are not forced to add fluff to the series, but in terms of the constraints of actually putting together a beautiful piece of film, Brown Girls is a fully thought out series.

Asghar: In You're So Talented, Sam wanted to strive for characters that could be mediocre and bumbling. It's important to see someone like Patricia that is like, "Single girls club forever!" and, "Fuck this dude! I'm going to call him an Uber home," but then get really upset when he walks in the room with another girl and lashes out and doesn't really know why. It's important to see Leila say, "I don't need Miranda," and then realize the relationship was actually really important to her and she was pretending it wasn't. These characters make decisions that are often not thought out and that don't make sense. They get to contradict themselves.

I've been thinking about who is allowed to make mistakes, especially since The Grammys when Adele won Album of the Year over Beyoncé. Adele is obvious very talented, but she is allowed to mess up and be seen as humble and gracious because of it. Conversely, a woman like Beyoncé must always be flawless and still sometimes doesn't get the recognition she deserves. When are women of color allowed to make mistakes and have mediocre moments?

Bailey: God, I love Beyoncé. I love everything she does and the way she exists. But very few women, especially women of color, get to do that. It's so important that those bomb-ass women who are killing it [are recognized]. They should exist as long as the other side gets to exist as well. And most importantly, the people that fall in the middle.

I'm interested in characters that are, at their core, trying to be better, but in your early and mid twenties, how are you going to do that? I'm never going to be Olivia Pope or Michelle Obama. They're amazing, but I can't live under that pressure. So, one of my goals with Brown Girls is to show brown and black women as flawed and yet still worthy of love and of the same kindness and benefit of the doubt that white people get.

White characters are treated like blank slates. They can be anything. But the moment you show a person of color, they are loaded with limiting stereotypes.

Bailey: With stereotypes and then also [they have] their culture on their back. That's just part of our experience. I don't want to act as if that doesn't exist. It does. If Brown Girls looked shitty, or if Fati hadn't written such a great series, people would not think twice about the series. We have to work that hard with as little means as we have to put this on.

Asghar: We had such a limited budget, and it really goes to show Sam's talent as a producer and all of the crew's mastery of their craft and their resourcefulness. It kind of boggles my mind; this show was shot on $20,000. That is nothing for a web series. That included everything, and we paid people. We were not given a lot, but we made a lot out of what we were given because we've spent our lives being resourceful.

I'm curious about the music. I was initially drawn to the series because of the theme song.

Bailey: Jamila Woods, who's Fati's best friend and an amazing musician, was our music consultant. We asked her to do a theme song, and she reached out to Lisa Mishra and Dee Lilly who are musicians based in Chicago, and they did that song together. A lot the music from Jamila's album HEAVN is in it. She also listed a bunch of other artists that she thought would fit well for the series, and they were all down to donate their songs.

Asghar: She wanted to do something that mimicked the friendship in Brown Girls. It was really important to her to collaborate with Lisa; she wanted the song to be a collaboration with her and a South Asian woman. And what she said, which is fascinating, is that they both wrote separately and then ended up saying very similar things in separate languages without looking at each other's writing.

I love Bollywood songs from my childhood, but I don't have cultural context for them, which makes me sad. I'm always wondering, "How do people my age think about this song? Is it corny? Is it nostalgia-evoking?" So to see people like me in Brown Girls and to hear a theme song that reminds me of my childhood but that I can also place culturally was amazing.

Asghar: What you're saying is so important. When you're part of a diaspora, particularly in America, your understanding of culture is in a vacuum. Maybe you can speak another language, for example, but you don't know the slang. It's not something I see spoken about that often. I think that there's a lot of disconnect that comes from South Asian people who grew up in South Asia and South Asian Americans because of that. The sadness that you talk about is something that I've felt very often, and it's something that is really important to be explored in shows like this that contain multiple diasporas.

The portrayal of friendship on Brown Girls is so powerful. So many institutions make money off our loneliness. We're told if we're single, it's because we have fundamental flaws that will never be fixed unless we wear certain makeup and manipulate our bodies. Friendship is a way of countering that loneliness. I'm curious how you think about the radical potential of friendship.

Bailey: I think it's vital to show two women who are not in conflict with each other. Their relationship is so deep that they're beyond that. The real conflict that happens in the series is from outside forces. The friendships are so intact that they can be messy and even disappointing sometimes, but the [bond] is never really rocked.

Asghar: When I was struggling with a lot of things about my confidence - particularly around being a confident artist - a lot of my friends who are queer people of color and women of color would say, "I wish you could see yourself the way I see you." I think that's such a beautiful sentiment. If you could see yourself in the eyes of your friends and the people who love you, wouldn't our world be radically different? Wouldn't it be amazing to have shows that show ourselves through the eyes of people who loved us rather than through the eyes of whiteness or through the eyes of men? If we can create shows like that, that is a success - to show the spotlight of love onto these people who don't normally feel loved by the world.