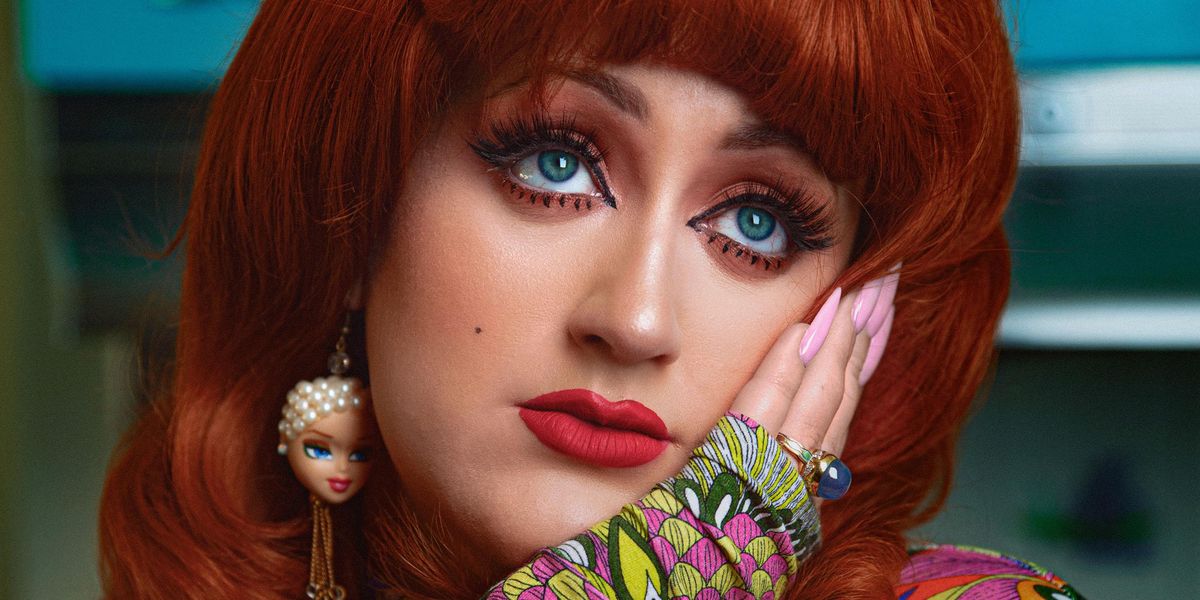 Like any big star, Brittany Broski lives in Los Angeles. The 24-year-old Texan moved to California a year ago, and while you won't necessarily find her chilling with the D'Amelios at BOA Steakhouse, she's definitely been moving and shaking in her own way. "What I've gotten the most out of so far from living here is just the sheer amount of connections," she tells me over the phone. "A lot of my favorite YouTubers, I'm now friends with, we're going to each other's houses. It's nice having people that do what you do all in a central location — it's validating."

So what is it that Broski does? You probably already know. So does she. Like any successful creator, she's hyper aware of her audience. Especially because they recognize her on the street all the time. "'Cause I live in West Hollywood. It's the girls, the gays and the baes. And they can spot me from a mile away — I usually have pretty big hair."

To get it out of the way, Broski is the TikTok artist formerly known as Kombucha Girl, a reaction meme that got some good laughs in 2019 but should hardly define the genre of deftly casual stoner comedy videos that have propelled her to fame and fortune in the two years since. When I ask Broski about whether or not she still feels a connection to Kombucha Girl, her heavily accented, off-the-cuff tone provides its own answer. "Absolutely fucking not. Leave her in the grave. She has been dead and buried, but y'all keep wanting to dig her up. Y'all are some grave diggers. She's resting in peace. Don't disturb her."

At this point, bringing up the meme feels like a roast. Whenever light internet cancellations come her way, she notes, the headlines frame her as a milkshake duck. The Kombucha Girl said what? "It's not really all that I am," she says. "Just a couple of Jim Carrey faces."

Broski's best videos are confessional. Despite a clear talent for character work, she is most beloved for simply being herself. While she did once aspire towards a conventional comedy career, one where she'd "do stand-up and SNL and this and that and the other," she has come to prefer making content without a brick wall backdrop or contrived sketch format.

"I'm throwing the humanity back into it, instead of being, just, dance monkey dance," she says. "I'm a funny person. And I'm allowed to exist outside of just a funny character." We then proceed to say some cruel things about watching stand-up comics awkwardly adapt to TikTok during the pandemic. Strike those from the record.

If it's not "comedian," then there isn't yet a good word to describe Broski's job, which also includes host for TikTok's official podcast, For You. Influencer? "I hate that word. I hate that word so much." The next best term would be "content creator," but there's something so generic and icky about that one, too. "What am I, shitting in my hand and rubbing it on a canvas? Like what do you mean content? Anything is content."

Broski settles on a descriptor that's a little more apt, cutting to the chase of her appeal. "More like an online personality is what I would describe myself as, because I am what I do and the videos I make."

Taking cues from the first generation of YouTube stars, Broski's going all in on relatability, filming her TikToks from a trademark unflattering below-the-chin angle, goofily riffing about mental illness or the cuteness of dogs eating chicken nuggets while lying in bed. Check her comments section for dubious compliments about the "bravery" of daring to show her real, unfiltered face. "Kind of offensive," she laughs.

Broski's everywoman persona extends beyond occasionally going makeup-free. When vlogging, she'll go off on pretty much any topic that comes to mind, creating a sense of intimacy that isn't as false as it seems: she reads all of her DMs and happily responds to comments, even the kind-of-rude ones. She admits to going too far sometimes, and having to pull back: "Relatability is rewarded, but at what cost? Because now I'm sharing so many personal details about myself with six million people, who can in turn, weaponize that and use it against me."

Which is where we arrive at the dilemma. A series of dilemmas, actually, that are coming together to cause a mass existential crisis within the still-fledgling content creation industry. The funniest accounts on TikTok, Broski knows, are the smaller and weirder ones that were once the platform's bread and butter. That's the culture she came from. But if you want to actually make money as a creator — or online personality, shall we say — you've got to keep accumulating followers until you reach a certain peak. There is no influencer middle class. And pandering to that new wider audience means your content changes, often for the worse.

"When any individual is given that much attention online and given the opportunity to make money off of that attention, you are creating a monster," she says. "It's just human nature." It's possible, especially right now, to make a shitload of money off of what's effectively pretty watered-down content. If you want to. If the compromises feel worth it.

"The reality of it is, you're a walking billboard," Broski says. "What we do as influencers is advertise for companies, in-between all of your other content. And that's how you make a living. So if you're comfortable whoring yourself out like that, anything's monetizable, because companies always are paying for advertising and they're slowly realizing that influencers are the way to do it successfully."

Then there's the temptation to cross over into mainstream, mass-media fame. Attempt a movie star crossover, like Addison Rae, or sign up for a Netflix reality show, like the Hype House kids. For her part, Broski is a little wary of taking calls from desperate networks hoping to reach a Gen-Z audience.

"It has been attempted in the past," she notes. "YouTubers try to be movie stars, Viners try to be singers. A lot of the time it crashes and burns and that's the end of their career, because they tried to dip their toes in something that they were not prepared for or talented in — they didn't have the support moving into that medium."

The trick, Broski thinks, is to keep it online. "You can do whatever you want to do. Just keep it within your audience. You know, they love you. They want to see you succeed." She counts Good Mythical Morning hosts Rhett and Link as two of her biggest inspirations and influences, citing the duo's ability to remain loyal to their original medium while occasionally crossing over to late show guest slots that still have an unmistakably internet-y edge. "I really, really look up to them," she says. "I think they've done it perfectly."

Broski has clearly thought all this through, which isn't the impression you always get when chatting with young TikTokers who've recently moved to LA. She's preparing herself for the long haul, and her odds of survival, even as she stakes her income on a trend-based algorithm, feel pretty good. Especially when she frames them within a larger context of where the entertainment industry is headed.

"We're entering this age where social media stars are going to be the new A-list celebrities," Broski says with flat confidence. "We're already seeing it. People don't really care anymore about the Brad Pitts and Angelina Jolies of the world. They care about the [D'Amelios]. Especially teenagers — they're like, who's Julia Roberts? There's going to be a generation of kids that have grown up with an iPad in their hands, and they are tuned in to personalities online, and that's going to be their realm now, that they care about."

Broski isn't alone in making these kinds of predictions. All of Los Angeles is buzzing with speculation about what will happen to Hollywood in the next decade — what the next slate of young stars will even be famous for. The actual creators fueling the boom are under enormous pressure to perform, and Broski easily anticipates my next line of questioning, which tragically involves such buzzwords as "burnout." She has no illusions about the position she and her fellow TikTok stars are in, and the potentially dark place where this is all headed.

"It's absolutely not sustainable," she says. "And I can't imagine a universe where it would be." In the olden days of five years ago, a creator could simply make their living on one platform, like YouTube. That era is long gone. "When you're an online personality, you have to be active on every single imaginable social platform where people can find you and interact with you. Twitter, Instagram, TikTok, Snapchat, YouTube. Then Reddit, Facebook, all these outliers that people also want to hear from you on."

Before I even get the chance to ask, Broski assures me that she has no solutions. Unfortunately, when she admits to mental health breakdowns on the feed, it's not just for laughs. "You can talk about self care all you want, but the reality is, it's not possible. I have no structure in place to preserve my mental health. When I have my spirals online, bitch, those are real spirals."

It's not all bad. For the most part, Broski is having fun, and she repeatedly expresses how grateful she is to be on the For You Page in the first place. For all the stresses of becoming one of the platform's biggest brands, she's a diehard fan of TikTok, and a connoisseur of its content. "TikTok has forever changed culture," she says. "It has defined a generation. It is probably the best thing that's ever happened. Every day I see something that blows my mind — it keeps outdoing itself."

And if we could just keep that unique spirit alive, Broski, the corpse of Kombucha Girl and the rest of us might just be okay. "If I could give any message, it would be to treat people with kindness," she says. "Spread love, because the internet is very dark and very toxic at times. And I think it needs more people that are just being themselves." Especially if those selves happen to be quite this smart.

Brittany Broski will be going live on PAPER's TikTok this Monday, June 14th at 5 PM EST. We'll see you there.