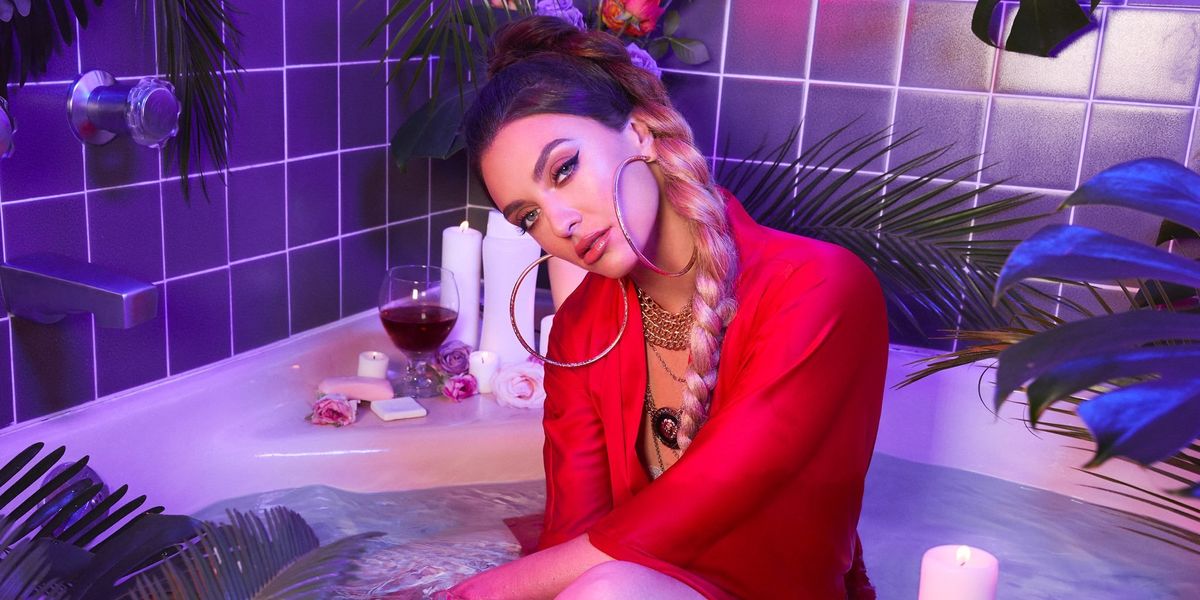 Is anyone else bopping along to TESTING and DAYTONA back to back, the latest respective releases from A$AP Rocky and Pusha T? I mean, all I can say is that I feel super plugged into youth culture right about now. While it will take some time to fully digest the high-caliber bops on both releases, I can say that on first listen, one of the songs from TESTING that immediately grabbed my attention was A$AP's collaboration with FKA twigs, who we just adore so much for her consistently innovative artistic contributions. "Fukk Sleep" finds the pair totally in their zone: A$AP drops clever couplets about the work-hard-play-harder mantra defining celebrity hip-hop lifestyles over a seductive, stylist beat, and twigs matches him with her trademark fluttering, sensual coos layered and seamlessly into the mix. The song, like most of A$AP's output, manages to be distinctly popwise, street-smart, and so effortlessly chic we are already imagining this on a fall runway for Virgil Abloh's Louis Vuitton, models wearing logo'd sheaths for the boudoir and the boardroom. Also, "Praise the Lord" featuring Skepta is getting repeat plays on this end for its decidedly New York eye on appreciating blessings of all kinds.

And here we are with DAYTONA. Say whatever you will about Kanye West, but the seven-track production is impossibly impeccable and even more impossible to ignore. DAYTONA is made stronger in how it further clarifies Pusha T's own very public leftist politics, sure, but it really relies on an airtight blend of Kanye's passion for prime soul sampling, Pusha's luxe streetwise rhyme schemes, and dark, deep mood dipped in liquid gold. "Hard Piano," with its loopy, brooding, minor-key philosophizing is one the best rap songs of the year, in my opinion, only made better by a particularly pensive verse from Rick Ross. Pusha T sits on top of the world and has the luxury of time to take it all in and to contemplate the complex man he's become in the process.

CHVRCHES returns with their third album, Love Is Dead, today. And "Deliverance" is one of several tracks (including the eerily Drake-like coincidentally named "God's Plan") that offers meditations on what we believe, and personal sacrifice. It's a hooky, synthy, thought-provoking good time that leaves you with much more to consider about the turbulent time we're living in now; the epitome of Pop As Message. As usual, lead singer Lauren Mayberry is front and center in the heady mix, all sweetness and light with the hooky, dance-friendly melodies in abundance, but confrontational and introspective with lyrics like "Is it deliverance if you never ever change?" and "Is it deliverance if you hurt me in exchange?" In a world full of noise that constantly bombards us, the music CHVRCHES allows us to do a double-take and look deeper within.

Issa bop! Pop wunderkind Leland's confident, strutting "Run Into You" is about, well, running into exes in public, and coming out victorious. Lyrics like "I won't let your presence bring me down / Or keep me from kissing someone else" gives every queerling around the world hope that we can still show face despite heartbreak. The song has a stop-start production that propels its honest lyrics and Leland's honey-silk vocals forward into a stratosphere (quite literally, the song's last minute of whirling synths and buzzes feels almost intergalactic) that might be closer to reach than we might think. "Run Into You" assures listeners that no matter what happens, we have everything we need within us.

Who doesn't love a roaring feminist rock anthem called "Thunderpussy" by a band called Thunderpussy, from an album called... Thunderpussy?! I almost feel like no matter what I try to write about this song, it just writes itself, so honestly, it's best if we all just step aside, or lean back and let these four wise and wild women from Seattle bring ferocious, new, and welcome life-force into rock-and-roll. Take it away, ladies.

OK, Janine fans! 99 is finally here. Debut album opener "Be By Myself" sets the tone beautifully for an album full of lovelorn R&B bops. It's one of those confidently bombastic songs that I can already imagine sliding nicely into a stripped acoustic setting, and those na-na-nas in the hook really sell this for me. As usual, the melodies are written with tenderness and care. It's like the more Janine suggests she doesn't care on this song, you know she really does. For those of us listening closely, it's so refreshing to hear a singer be this invested in her heart.

Hip-hop artist Jay Prince's album Cherish drops today, and the whole thing is a start-to-finish series of bangers that stylishly blend elements of tropical house, trap, electronica, and R&B. "GLAM" is just one of many standouts, but we selected this one for inclusion in this week's Bops Only because of it's endless groove. At just under three minutes, Jay Prince croons, calls all the girls to the dancefloor, gets vulnerable, and switches up his flow more times than we can count. It's a feel-good bundle of hooks and the beat is compulsively party-ready. What's not to love?

PC Music's EASYFUN and Iiris drops "Be Your USA" today, and it's cellophane-shiny bubblegum dance-pop with chrome-covered high-pitched vocals that literally feels like eating a box of Mike and Ikes, getting cavities (then tooth extraction) and actually feeling nourished by the whole experience. Honestly? Enough said. This'll get at least a million spins on your party/workout/life is good playlist, guaranteed.

Brooklyn musician Natti Vogel might have a sound that feels classical in its cabaret and theatrical touchstones, thanks to his extensively musical and performance art background, but at his core, no matter what inspirations Vogel pulls from, his core is that of a sticky-sweet pop star with endlessly hashtaggable message to boot. In several ways, his latest single since releasing his debut EP Serving Body earlier this year functions to serve this purpose. The super-catchy "Trick! The Musical" tells an unapologetically queer, (and cheekily humorous) tale in which the protagonist, an open-hearted top, is rejected by a viperous bottom. In typical queer narratives, we might be more likely to hear this the other way around, so the acknowledgment that tops might be too fragile to admit when they feel burned feels radical. But lines like "when I took a look inside it was airtight / there was nothing there," also present a duality. "Trick! The Musical" explores how even if we feel we've been tricked or had, it's about the ways we trick (via sale or otherwise) ourselves most of all, using the metaphor of sex as transaction for aural pop bait. So make no mistake: no matter how queer the subject matter is, we are all guilty of playing and being tricks.

Jessie J released FOUR EPs today. With four songs each, themes based on the the acronym for R.O.S.E. (Realisations, Obsessions, Sex, and Empowerment). That's 16 songs released concept-album style! Who knew? Let's let that sink in for a second, especially since it's been a minute since we've heard from the mega-talented British vocalist. It's honestly a pretty fierce way to reclaim one's narrative. Speaking of: "Petty" from Obsessions is a standout in how it goes about doing just that. In the song, Jessie J lashes out at a jealous hater with biting one-liners ("stay out my sun witcha shady ass" will surely go down in history). And while we love the slow-burning drama of this one, it's also a more gleefully villainous change of pace for Jessie J, who is known for inspirational anthems like "Who You Are" and "Price Tag." Maybe I'm terrible for thinking this, but it's always nice to see a pop star show her fangs.