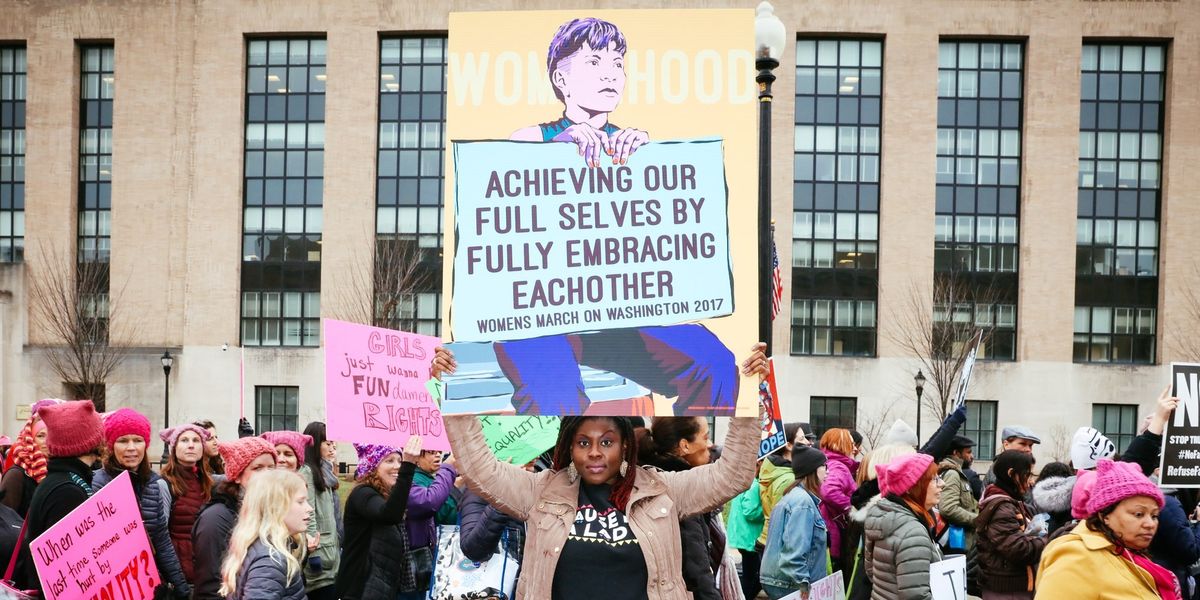 Beyond "Pussy Power": Why The Women's March Still Needs Work

Over the weekend, over 3 million people participated in women's marches around the world in protest of the newly-elected President Donald Trump, under the banner of an inclusive feminist movement that represents "half of this country."

And while it was an amazing turn-out that sent a powerful, undeniable message to the Trump administration and other far-right leaning governments, this heartwarming show of solidarity was dampened by a distinct proliferation of unnecessary cissexism and ableism.

Among the wide range of signs and sentiments expressed, some popular statements like "No Uterus, No Opinion," "No Pussy, No Power" and "Free Bleeder," for example, were unsettlingly divisive and ultimately exclusionary to marchers who do not identify with these narrow demarcations of womanhood. Even more troubling is this coming on a day of unified, inclusive advocacy for a massive spectrum of issues ranging from immigration to disability activism to reproductive rights.

As many have noted, being a woman is not confined by old-fashioned, second-wave theory that adheres to certain biological definitions of womanhood. Being a woman is not solely defined by your anatomy. Gender is not just genitalia. There is no binary.

While good intentions abounded, it's clear some people did not think through what a lot of their signs were implying. Signs that equated womanhood with having a uterus or a vagina or a period diminish trans women and others who identify on the broad spectrum of "being a woman". Menstrual pads reading "No Pussy, No Power" are thoughtless as well to the legions of elderly women and young girls who are marching because it puts your worth in fertility. But your value as a woman is not based on your reproductive viability.

However, some of the discussions surrounding this issue have also been slightly misguided, with many critiquing the idea of "Pussy Grabs Back" as cissexism -- which it's not. It's admittedly not perfect, but there's a significant difference between exclusively equating womanhood with just having a pussy and being horrified at Trump's comments and then directly responding to them by publicly asserting that you don't want your private bits touched by someone else.

Having a vagina and not wanting someone to grab it is NOT cissexism. Saying your vagina is the definition of womanhood IS cissexism. K? K.
— mahna mahna (@vesaldi) January 22, 2017

@chescaleigh i totally agree !! though i think there is one instance in which the genitalia-focused signage is warranted: pic.twitter.com/E7iWu4m5BS
— bel is a fuck (@sixplums) January 22, 2017

This is discussion is not helped by pieces like Emma-Kate Symon's NYT's Women In The World op-ed, which boils down the nuanced and valid complaints of different groups in the march to essentially "shut up and fall in line for the greater good." But the "greater good" is not a good argument for silencing those who feel excluded from a narrative that's supposedly there for all.

That all said, these complaints and concerns about intersectionality and language aren't lectures. They're learning opportunities so we can grow together, ensure everyone feels welcome and work together toward a truly inclusive model of solidarity. After all, as many of the signs this weekend read, we all just want our fundamental rights -- and the best way we can assure we are heard? Make sure every woman feels like this is their fight.