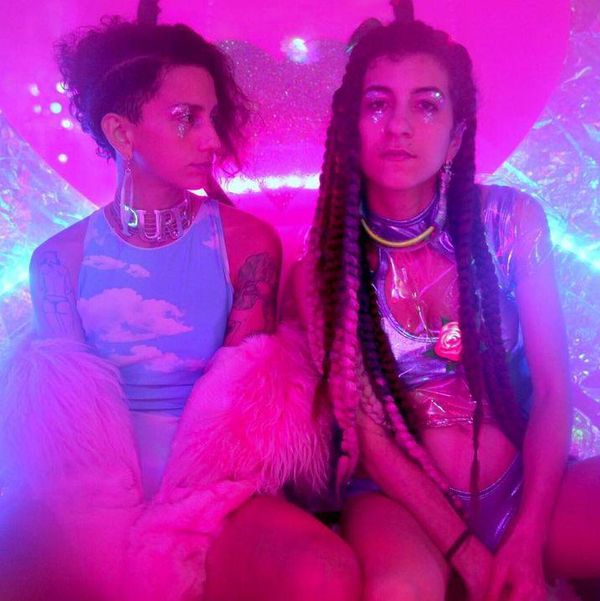 The Miami duo Basside has announced that a new EP of unreleased material they made with the late producer, SOPHIE, will see the light of day this April.

Following the news of the producer's sudden passing, the duo — Linda Attias (aka Que Linda) and Carolina Villalba (aka Caro Loca) — shared a previously unreleased remix of "NYC2MIA" off Basside's debut EP, pledging to donate 100% of the profits from the track to the Sylvia Rivera Law Project. "We've waited way too long to let this song out," Basside wrote in a statement. "We had a few road bumps that made it difficult for us, and we kind of just felt like we had all the time in the world. The tragic passing of SOPHIE has made us realize that time is precious, and waiting for a hypothetical future we know nothing about is the wrong way to live. All we have is the present."

According to a new interview in the Miami New Times, the remix is one of six unreleased tracks Basside recorded with SOPHIE after they met in 2016 at III Points. "SOPHIE was there with [Miami artist Veronica Gessa] and saw us, and told Veronica, 'Hey, can you get these girls to LA?'" Attias remembers. The resulting tracks from that session, like "My Best Friend Too" and "Fuck It Up," have since cropped up in some SOPHIE's DJ sets and Basside's live performance, but like so many of the live rips and leaked demos that have been floating around fan forums and stan accounts, they never ended up getting a formal release.

Basside's Attias explains that the reason they've remained dormant for so long was a result of miscommunication with their management. They met up again in 2019 with SOPHIE while the producer was in town for a show and "[SOPHIE] said, 'Oh, I made those for you. You could have released them the next day, and I wouldn't have cared.'"

According to the pair, there were already plans to release the new EP, F*ck It Up, on Brooklyn's Sorry Records this year but echoing their earlier statement they felt that in light of SOPHIE's passing there was no time like the present. "We wanted to give a gift to everyone that's heartbroken," Attias says.

Normally the news of new SOPHIE music would be cause for celebration but in the wake of the artist's recent untimely passing it feels at best bittersweet. In addition to the new Basside EP, it has also been announced that a collaboration between SOPHIE and Jlin is set to release in March as a part of a new album for the rescheduled Unsound Festival.