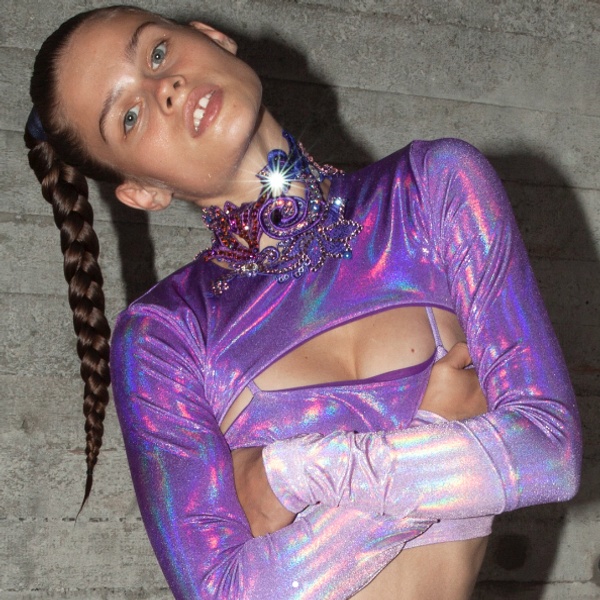 Are American Apparel-Style Leotards Back?

Last night, Saks Potts' lush Olympics-inspired show at Copenhagen Fashion Week was held at the Østerbro Stadion, an athletics facility in Copenhagen. And in an impressively coordinated nod to the Opening Ceremonies, designers Catherine Saks and Barbara Potts kicked things off with a performance from a Danish girls' gymnastics team. They wore bright spangly leotards and moved together with expert precision, tracked by swirling lights (I saw one dude who loved it so much that he kept pumping his fist in the air). And the whole show was inspired by their style, which felt a bit like a nicer version of 2006-era American Apparel.

The Spring 2019 collection was called Olympia (Princess Maria-Olympia of Greece and Denmark even walked the runway), and the designers had flag-twirlers from the Opening Ceremonies in mind. "I don't know the name in English, but there's always a girl walking with this flag or something," laughed Saks. "And that was that kind of girl!"

I did not know this either, but apparently they're called color guard, and they have really fabulous uniforms.

Saks Potts is primarily known for their indulgent, OTT glamorous coats. But their ready-to-wear clothes this season were particularly dazzling, taking cues from said color guard and gymnasts and ice skaters and baton twirlers. The models looked like intimidating Danish versions of Tonya Harding or Olive from Little Miss Sunshine, with a touch of disco. And while the Saks Potts versions are obviously more sophisticated, for those of us who grew up during Peak Hipster they're something of a callback to the era of American Apparel leotards and bandeaus, which were mandatory for raves and festivals about a decade ago. Paging the Cobrasnake.