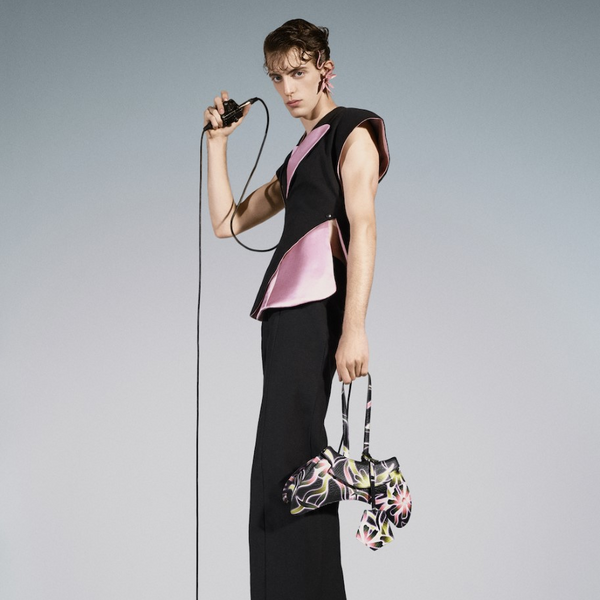 Rising French designer Alphonse Maitrepierre's wildly imaginative aesthetic is immediately identifiable, but he's been honing that vision since he was just a young teen. "Everything started in 2009," he explains. "I believe it was the very beginning of YouTube, and I clicked on a link to Jean Paul Gaultier's show. It was [his Fall 2009 couture show], and it was so crazy at the time. The music and everything else was amazing, and I realized that I really wanted to do [fashion design]."

Finding a sense of clarity later on, Maitrepierre attended Belgium's leading visual arts and fashion school La Cambre a few years later, where he mastered more elevated design techniques and learned fashion by the book. "I appreciated [school] but I didn't feel like I was an academic person, so I wasn't really into studying because it was too straight for me, not a lot of freedom," he recalls of his time in Brussels. Shortly after graduating in 2016, he decided to return home to Paris, where he landed an internship with the design visionary who initially inspired him to pursue a career in fashion: the enfant terrible himself, Jean Paul Gaultier.

"I think that was one of my most amazing experiences in fashion because I saw his take on everything, and his vision is just so bold," Maitrepierre says. "It was just fantastic to get inspired by someone like him. I really loved the fact that all of his inspirations were always put in contrast with something very humorous and fun. He always had the idea of creating a character rather than just doing simple clothes that would be sold and then be done with." A full circle experience, Maitrepierre's temporary position with the House quickly evolved into a permanent creative role, positioning him at an unprecedented vantage point to enter the industry.

There are several pillars of Gaultier's artistic vision that work their way into Maitrepierre's individual aesthetic, but if there's one that finds particular prominence, it's his fixation on character development. After working with the legendary French fashion designer, Maitrepierre followed this cinematic passion into the film industry, where he delved into costume design for filmmaker Yann Gonzalez's latest work, Knife + Heart. Though his thirst for immersive creative direction was quenched, the versatile artist longed to reunite with his haute couture roots, so he took on a styling position at Acne Studios before eventually deciding to embark on a solo venture.

"After my experience [with Gonzalez and Acne Studios], I really wanted to go back to something more personal and tell my own stories," he says. "I was able to use my own vision and make a world with characters I wanted to make. That's why I wanted to launch my own brand — to be free with my creations and design, and to never compromise."

Now, at 25, the Gaultier protégé and former Chanel consultant sits at the helm of his own namesake label, a brand new e-store and a signature range of Manette handbags. Seeking inspiration from carefully constructed characters in the same fashion as his mentor, Maitrepierre has already released four full-range collections, each of which boasts a firm grasp on his whimsical, gender-fluid style. Where his first two collections set the tone for the House, reinterpreting traditional silhouettes with loud fabric combinations and double-take-worthy accessories, his following Spring 2020 collection emphasizes his storytelling abilities, painting a picture through animalistic character interpretations and nature-inspired ensembles.

"In my mind, I am always making a joke that [my designs] could be for an old bourgeois woman, very fun and decadent," he says. "For my winter collection — the last one I did — the inspiration for the prints was the old clients I saw when I was at Gaultier and the fact that a lot of them had some botox. It makes me laugh to create [that] kind of character." Blending his elevated artistry with humorous memories, Maitrepierre's Fall 2020 range offers an opulent flair while remaining true to the all-encompassing storyboard that defines each of his collections.

Still in its infancy, Maitrepierre's team works out of a small studio in Paris and relies heavily on local craftsmanship, tapping Alice Watier for leather pieces and accessory manufacturing, Sebastien Saraiva for mesh works, Sara Vercheval (formerly at Balenciaga) for graphics, Studio Etiquette for prints, Emile de Gorce Dumas for ceramic jewelry and designer Samudra Hartanto as his right hand. "I'm very lucky because I have a great team," he says. "We are all young people and very full of energy, so it's nice."

Today, Maitrepierre is working diligently to finalize his next collection, and for this one, he's centering on the more ambiguous "character" of sustainability. "For the collection we are preparing for September, we are working a lot with the idea of collage," he reveals. "We are going to make a collection just with trash. The idea is to do something very haute couture, but upcycled. The idea is to be a bit more conscious." Recognizing fashion's fault in the global climate crisis, Maitrepierre is determined to present an eco-conscious collection at a parallel level of artistic expertise. "It's a very complicated moment in fashion right now," he says. "It's no longer very easy across the table to produce outside of France. This is better for everyone and it's better for us."

Related | Fashion Month Was Another Failed Attempt at 'Sustainability'

In a final reflection before heading back into his studio, Maitrepierre takes a step back to share what he wants his brand to ultimately stand for. "I want my designs to create characters that can give the freedom of creativity to people," he says. "I don't want to create a design that you don't want to wear, or something that is too invasive where you can't express yourself. I think it's always a balance that we think about. For me, it's always important to give a bit of freedom to people. I want to have a strong design, but something that can represent [people] at the same time."

Take a peek at Alphonse Maitrepierre's Fall 2020 lookbook, below, and head over to the designer's newly launched website to see more.