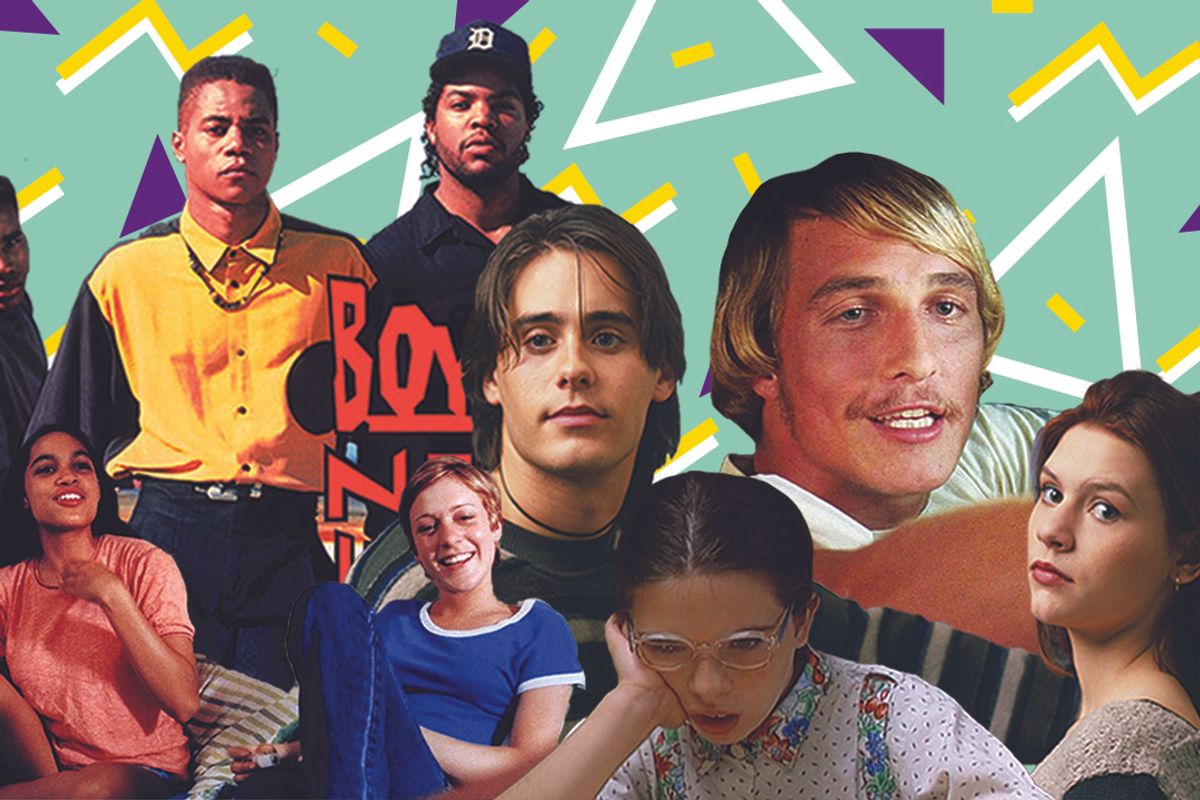 A Look Back at '90s Teen Entertainment: The Kids Were Not Alright

When the series My So-Called Life debuted on ABC on August 25, 1994 it was an instant critical darling and a watershed moment for network shows. This story of a high school sophomore Angela Chase (Claire Danes) was told with surprising humor and honesty from a girl's point of view. Her rebellious nature, her fights with her loving family, her new choice of friends, and her mooning over the local bad boy (Jared Leto) all rang true as an honest depiction of a teen growing up in the Clinton era. Up until that point, shows about teens were nighttime soap operas like Beverly Hills 90210 or unrealistic family friendly offerings like Blossom. In contrast, My So-Called Life tackled what was still controversial subject matter at the time for television -- drugs, homophobia, pre-marital sex -- and there was also a freshness and innovative quality that clicked with its rabid, but unfortunately small, fan base.

While My So-Called Life was unique among TV shows for young people, by contrast, independent films that told stories about young people with unflinching honesty and creativity were flourishing. Gus Van Sant's My Own Private Idaho (1991), a tale of a narcoleptic street hustler (with an unforgettable performance by River Phoenix), dared to lyrically mix Shakespeare into this offbeat masterpiece about lost souls. John Singleton's Boyz N The Hood (1991) was an incendiary tale of African American teens from South Central L.A. that had an amazing cast (Cuba Gooding Jr., Laurence Fishburne, Ice Cube, Morris Chestnut) and a release only months after the Rodney King video. This racially charged film struck a raw nerve with audiences. T. Welcome To The Dollhouse (1995), director Todd Solondz's savagely sardonic, suburban dark comedy about a tormented, unpopular young girl Dawn Weiner (Heather Matarazzo) made you laugh and gasp in horror at the same time. There was also Dazed and Confused (1993), Richard Linklater's funny, warm, stoner love letter to the past set in Texas in 1976 with a bunch of junior high and high schoolers celebrating the last day of school and partying hard. In The Basketball Diaries (1995), the Scott Kalvert-directed film based on Jim Carroll's hip autobiography of the same name, Leonardo DiCaprio gave a galvanizing performance as a Catholic high school basketball whiz who spirals down fast when he discovers the joys of getting high. Nowhere (1997), the last film in director Gregg Araki's apocalyptic teen trilogy, was a dark, pop-psychedelic live action cartoon brimming with dazed, cute, stoned-out nihilistic kids. Towards the end of the decade, we saw Election (1999), Alexander Payne's caustically funny story of a relentlessly peppy go-getter named Tracy Flick (Reese Witherspoon) running for school president and the teacher (Matthew Broderick) who plots to undermine her election any way he can and The Virgin Suicides (1999), Sophia Coppola's dazzling debut based on the book by Jeffrey Eugenides about the tragic tale of five sisters brought up by strict religious parents and the boys who obsessed over them.

But perhaps the most shocking and influential indie movie of the '90s has got to be Kids (1995,) a blistering, raw, scabrous portrait of the latch-key teens in NYC, their skateboard-loving, free-wheeling lifestyle filled with drugs, drinking and unprotected sex. The wonderful Chloe Sevigny made her debut as a young girl frantically running around the city hunting for the boy who infected her with HIV. This was also photographer-turned-director Larry Clark's debut with a knife-sharp screenplay by future indie film superstar Harmony Korine. After seeing Larry Clark's harrowing portrait of drug-taking, condomless punks in Manhattan, parents might be tempted to rush home and press a pillow over their teen's heads while they sleep.

My So-Called Life was a short-lived affair (it was cancelled after one season) but it left its mark on television. Ironically, today's independent films don't hold a candle to the staggering array of cable and network TV shows. The difficulty in financing movies have forced many independent directors to bring their unique visions to the small screen and it's truly become a golden age of television as a result. This long-form way of telling stories has been a challenge that many directors have accepted with relish. It also gives actors the opportunity to dig into a role and offers the audience many facets of their psyche. Claire Danes, whose lovely qualities resonated in My So-Called Life now for many seasons has turned in a staggering, emotionally raw, performance on the hit Showtime political thriller series Homeland. Chloe Sevigny, who was unforgettable in Kids, was just as indelible as one of the three wives on HBO's Big Love, a terrific series about a polygamous husband (Bill Paxton) and his families. Do I miss the indie film boom? Yes. But being able to sit at home and binge on fantastic series like American Horror Story, Fargo, Penny Dreadful, Hannibal, Shameless, The Leftovers , Game Of Thrones and many others is an unending thrill.