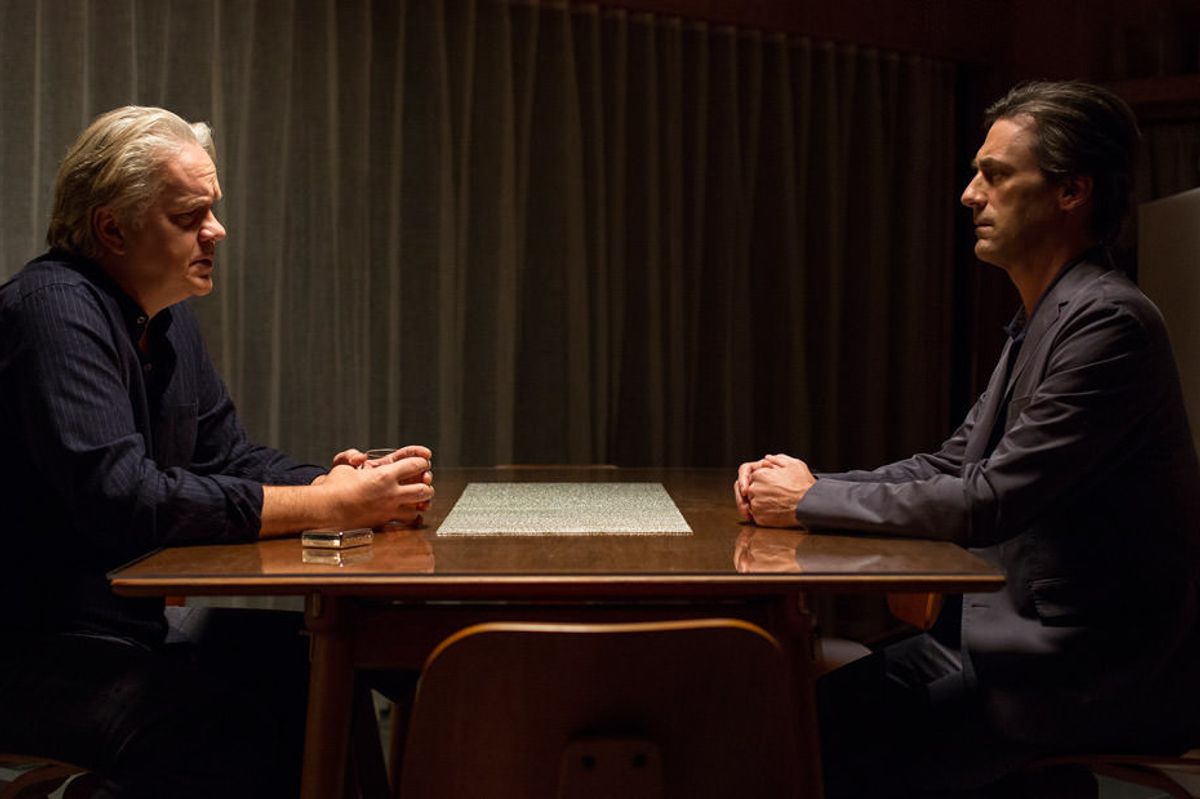 6 Films to See in September

Lucy (Brittany Snow) is returning to Brooklyn from Manhattan on the subway only to discover helicopters scarily buzzing in the sky and strange military-attired men shooting dead anyone in sight on the streets. Chased into a basement apartment by two thugs taking advantage of the chaos, she is rescued by a former soldier--Stupe (Dave Bautista)--and they dodge bullets down alleyways to make way to her grandmother and druggie sister's (Angelic Zambrana) home. "This is Bushwick--who invades Bushwick?" she wails, in directors Cary Murnion & Jonathan Milott's wildly suspenseful action thriller. There is so much wit, vitality and hair-raising thrills, and cameraman Lyle Vincent's astonishingly fluid camerawork plunges you in the middle of this terrorist nightmare from the alarming beginning straight to bitter end. Brittany Snow has an infectious grit and appeal and Dave Bautista's Stupe is touchingly haunted and heroic. The fact that you invest in these characters makes the tension often off the charts.

Marjorie (Lois Smith) is 85 and in failing health. She is given a computer program that conjures up a holograph of her late husband Walter (Jon Hamm) as a young man and they sit and reminisce about the past (at least the past that has been selectively programmed in). He is there to comfort Marjorie, but her prickly daughter (Geena Davis) is resistant to this technology and is lovingly chastised by her husband (Tim Robbins) that this is there to help her mother, who has her good days and bad. As the movie progresses other "Primes" are created as losses call for their soothing presence. Based on a play by Jordan Harrison and exquisitely directed by Michael Almereyda, this is a lovely way to examine the way we create memories, bury tragedies, and invent scenarios that help color our past. Each scene fleshes out more of a rich portrait of this emotionally conflicted family, but with great tenderness and delicacy. Davis and Robbins are perfection. Jon Hamm has a wonderful and touching gravity. Anyone who has had the great fortune to see the marvelous actress Lois Smith on stage knows how luminous she can be. Here she is truly incandescent.

Noomi Rapace is a CIA interrogator working undercover in London in the Social Services department when she is called in to help stop a future biological attack on the city. But things go terribly wrong and suddenly she is forced to go on the run to discover the mole in the CIA who set her up, and put a stop to the terrorist act. Director Michael Apted makes the most of this female Bourne construct and mounts a gripping thriller out of this familiar scenario. With terrific co-stars, including Toni Collete, Michael Douglas, Orlando Bloom and John Malkovich, the twists keep coming and Rapace keeps kicking ass with supreme style.

John Carroll Lynch, veteran actor/turned director, crafts a loving tribute to the great character actor Harry Dean Stanton. Stanton plays "Lucky," an ornery 90-year-old living in a quiet desert town who is a creature of habit. He wakes, does his yoga exercises and heads into town for a coffee and to finish his crossword puzzle at the café. He buys his milk at the convenience store before walking home to watch his "shows" on TV. And nightly he heads to a bar for his Bloody Marys and to see his friend (David Lynch) who bemoans the loss of his pet tortoise. But when he has a fall one morning, and even though the local doctor (Ed Begley Jr.) finds him in great shape for his age, he starts to brood about mortality. To watch Harry Dean Stanton's wonderfully ravaged face is akin to watching Buster Keaton at his deadpan best. And for a small intimate character study there are moments of grace- an interchange with a fellow veteran (Tom Skerritt) at the diner is particularly moving. And the sight of (still handsome) actor James Darren at the bar was another wonderful treat. But it's all about Harry Dean Stanton and this performance is infinitely sublime.

Manolo: The Boy Who Made Shoes For Lizards

Finally, a movie for fashionistas and foot fetishists. Actually, this is a bright, affectionate, documentary by Michael Roberts about legendary "cobbler" Manuel "Manolo" Blahnik Rodriguez. From a pampered, happy, childhood in the Canary Islands, where he actually did construct shoes for lizards. His youth, moving from Paris to London during fashionably critical times of style and excess. He nervously showed his portfolio to Diana Vreeland who wisely told him to focus on shoes. The rest is history. From glowing testimonies from Paloma Picasso, Naomi Campbell, Anna Wintour, John Galliano (who he partnered with for a legendary fashion show), he comes across as a fastidious, funny, fussy, energetic delight. We also see several of his muses from art, statues, Cecil Beaton. But the sheer beauty of his "creatures," as he describes his creations, from the range of color, design and creativity is playfully inspiring.

Yes, it smells like bad teen spirit in Kevin Phillip's disturbingly good film set in a white bread suburb of the 1990s--a pre-cellphone, pre-Instagram universe. The eerie opening sequence, showing a buck who has accidentally crashed inside a high school lying mortally wounded on the floor, really sets the tone for what's to follow. Zach (Owen Campbell) and Josh (Charlie Tahan) are best friends. They are hanging with two other guys and check out Josh's brother's (who's in the Marines) room, where they find some marijuana and a sword. What follows is a bloody, horrible, accident that the boys flee from and try to cover up, but they end up consumed by guilt, paranoia, and fear which spins scarily out of control. Elizabeth Cappuccino is excellent as a young girl who seems smitten with Josh--but he is too screwed up by what happened to respond normally. I'm not quite sure if this all really works in the end but the performances are so terrific and some of the directorial choices are unnervingly evocative.