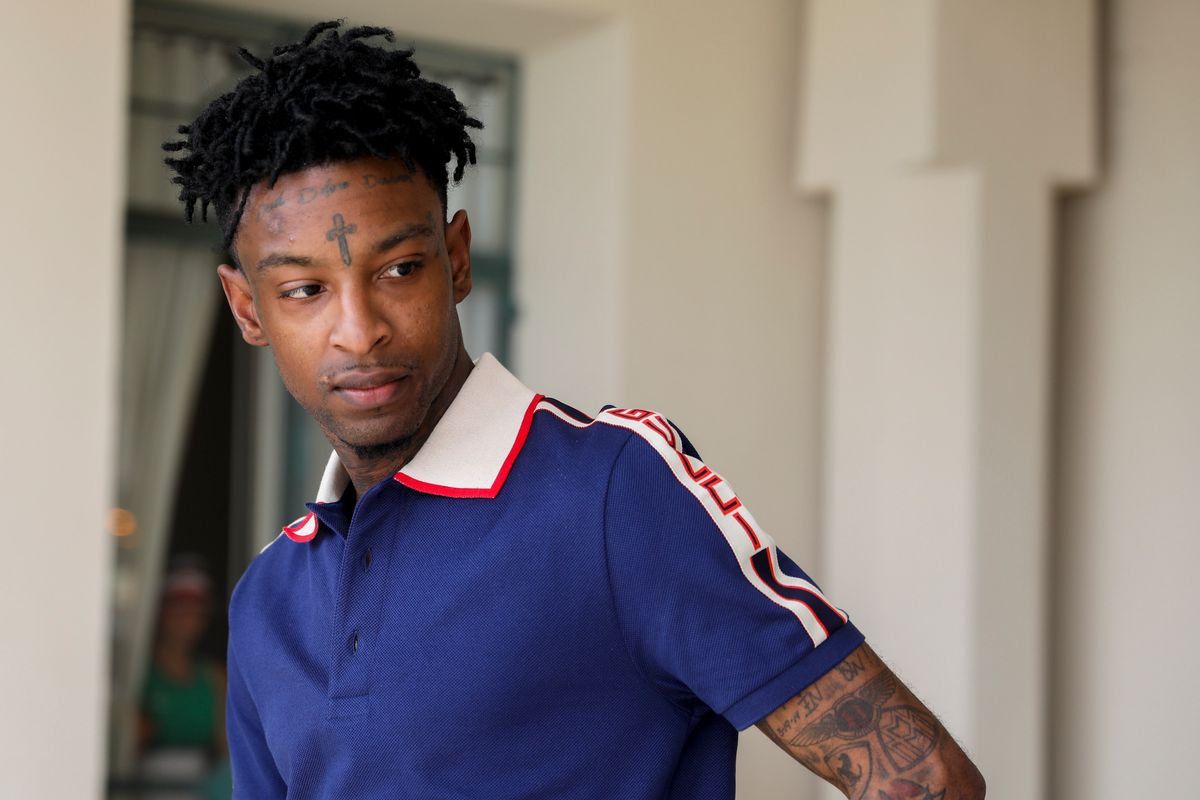 Everything You Need To Know About the 21 Savage Case

By now, most of the internet is aware that this weekend, 21 Savage was arrested by ICE. The agency claims that the UK-born artist has been living illegally in the United States since 2006. Most of us learned for the first time that the Atlanta-based Savage, considered a local rapper, is actually from the UK.

For about 10 minutes, everyone thought the whole thing was kind of funny, given Savage's entrenched identity as an Atlanta rapper, and not all that serious, given that Savage is wealthy, famous and grew up in a country from which immigrants can typically expect fair treatment from the US immigration system, rather than those from "shithole countries," as Trump put it. Memes were shared, laughs were had.

Related | Use 21 Savage's Arrest to Radicalize, Not Make Fun

Then everyone sobered up, and realized that in fact, this is really, really serious. We collectively remembered that although Savage is rich and famous, ICE is an institution that systematically targets and criminalizes people of color, and regularly incarcerates and brutalizes people who've committed no crimes. We realized that Savage, who has lived in America since he was 13, now faces deportation that could effectively end his career.

New developments have been steadily emerging about Savage's situation and rumors are flying. Here's what you need to know:

Where is 21 Savage from?

21 Savage, real name Shéyaa Bin Abraham-Joseph, was born in London in 1992. While there have been rumors that he was born on the British-controlled island of Dominica, The Source obtained the rapper's birth certificate, which confirms his birthplace as Newham, a London borough. According to ICE, Savage left Britain when he was 13 with his parents. Many were thrown by the incident because Savage has repeatedly claimed to be from Atlanta and staked his identity in the city. He's often discussed his childhood in Atlanta in interviews, and explained that the "21" in his name references to a Decatur, GA street gang. His rhymes (notably devoid of a British accent) often make allusions to the city, like in "Bank Account," when he raps he's "straight up out the 6." This was the root of the initial internet frenzy, which focused on Savage's "outing," rather than his legal situation.

What is the situation?

Early Sunday morning, following a performance at a Super Bowl-themed party, ICE detained and arrested 21 Savage, and placed him in a Georgia detention facility.

ICE is claiming that the 26-year-old is a U.K. citizen who arrived in America with his family and a one-year visa in July of 2005. They say his visa expired in July of 2006, and Savage has been living illegally in the United States since then. "[He] failed to depart under the terms of his nonimmigrant visa and he became unlawfully present in the US when his visa expired in July 2006."

"His whole public persona is false. He actually came to the U.S. from the U.K. as a teen and overstayed his visa," ICE spokesperson Bryan Cox told CNN's Nick Valencia.

"Mr. Abraham-Joseph was taken into ICE custody as he is unlawfully present in the U.S. and also a convicted felon," Cox added, implying that the rapper's 2014 drug-related conviction was a part of the basis of his arrest.

According to his manager, Savage is on 23-hour lockdown, without access to the phone. He'll face an immigration judge, who'll determine if the rapper will be deported.

What is 21 Savage saying?

Savage's attorney Charles H. Kuck concedes that Savage overstayed his visa, but is calling the Savage's arrest "a civil law violation," which is "based upon incorrect information about prior criminal charges."

Kuck asserted that the government has long known about Savage's status, given that the rapper filed a U-Visa application (designated for those who've been the victim of a crime) in 2017, and thus, legally, should have relief from deportation available to him.

The attorney compared Savage to the millions of Dreamers, immigrants brought to the US illegally as minors.

"As a minor, his family overstayed their work visas, and he, like almost two million other children, was left without legal status through no fault of his own… the continued detention of Mr. Abraham-Joseph serves no other purpose than to unnecessarily punish him and try to intimidate him into giving up his right to fight to remain in the United States."

Kuck condemned ICE's refusal to let Savage be released on bail, given that his notoriety ensures he is not a flight risk.

"ICE can only continue to detain individuals who are a threat the community or a flight risk to not show up at their hearings. Obviously, our client is not a flight risk, as he is widely recognizable, and a prominent member of the music industry."

What happens if 21 Savage is deported?

Anastasia Tonello, president of the American Immigration Lawyers Association told NBC that, based on his situation, if Savage is deported, he could potentially face a ban from the U.S. for at least 10 years, on the basis of overstaying his visa. He'd need to apply for a waiver just to visit the country.

"He's in one of the most notorious jurisdictions for removal," she said. "Atlanta has a very high rate of denials on any type of discretion or relief."

She suggested that the U-Visa application could be Abraham-Joseph's saving grace, as he can seek an official deferment while his case is pending.

Yes, unfortunately. ICE indicated in their statement that the arrest was based in part on a guilty plea Savage took in 2014 for drug possession. TMZ reports that Savage's felony was expunged from his record in September 2018, after he served 12 months probation, but notes that ICE does not always honor expungements.

A U-Visa is a path to legal status available to those who have been living in the U.S. illegally for 10 years or longer, have U.S. relatives and who have been the victim of a crime. Savage, who is 26, has been in the U.S. for over 10 years, has three U.S. citizen children, and while it's not clear what crime he's been the victim of, he's spoken repeatedly about being shot on his 21st birthday. TMZ asserts that Savage would be eligible, except potentially for his felony charge.

It's extremely common for a criminal charges to ignite deportation proceedings, since a felony conviction makes applicants ineligible for most channels for legal status — something that immigrant and criminal justice reform advocates have long fought against.

What's the deal with his cousin?

21 Savage was allegedly pulled over and arrested along with his younger cousin, Atlanta rapper Young Nudy, and two other unidentified people, as they were leaving a performance at a Super Bowl-themed party (though DJ BJ, a collaborator of both cousins, has contested that the pair were in the same car). Nudy was arrested on unrelated charges, and the Atlanta Journal-Constitution noted that Young Nudy was the original target of the police stop that ended in Savage's arrest. According to the local paper, the police possessed arrest warrants against Nudy related to aggravated assault and gang charges. It's unclear if the police had intentions to detain 21 Savage based on his immigration status when they sought out Young Nudy.

Nudy's attorney told AJC: "We believe that Young Nudy is innocent and this is a case of mistaken identity," Smith said. "Young Nudy's legal team is working closely with law enforcement to ensure this case does not get blown out of proportion."

Did 21 Savage diss ICE right before the arrest?

Kind of. Last Tuesday, less than a week before his arrest, Savage performed on The Tonight Show Starring Jimmy Fallon, where he performed an alternate version of his track "A Lot," with lyrics that addressed the American immigration crisis. The new lyrics included the lines:

"Been through some things so I can't imagine my kids stuck at the border / Flint still need water / People was innocent, couldn't get lawyers."

If the government was aware of 21 Savage's immigration status all along, why arrest him now?

That's the question on most people's minds. The FADER spoke with an immigration lawyer Betty Huang, who emphasized: "If you put in information for a U-Visa application in 2017, why is ICE picking [21 Savage] up now? I think that's one huge question."

Some are pointing to the Tonight Show performance and Young Nudy's arrest, but Huang focuses on shifting strategies, and the increasing arbitrariness of the Trump administration: "The question of why is ICE picking him up now shows a lot about what's going on under the Trump administration and how much they hate immigrants, and a lot of strange, retaliatory type of actions."

What are people doing about it?

Black Lives Matter, which supports the abolishment of ICE, is leading a coalition effort to have Savage released from custody. The group is called #Free21Savage Coalition, and includes organizations United We Dream, Color of Change, UndocuBlack Network, Define American and the Black Alliance for Just Immigration. The coalition has launched a petition, which you can sign here.

"The hundreds of ICE assaults and detention of Black immigrants is an endemic in the United States, and is too often carried out with the assistance of local law enforcement" reads the petition. "The circumstances of Mr. Abraham-Joseph's detention stand as a testament to the consistent and historically under-reported harassment and targeting of Black immigrants. The US' violent history of criminalizing Blackness intersects with its deadly legacy of detaining and deporting Black and Brown immigrants..."

"There are around 4.2 Million Black immigrants in the U.S. - 619,000 are undocumented" it continues. "Mr. Abraham-Joseph has been in the United States since he was a young child. Atlanta is his home. He has no current or prior criminal convictions and he is beloved by his friends, fans and family. It is shameful that he and so many Black immigrants are separated from their families on a daily basis as part of the US's heartless and racist immigration policies. Demand that the Immigration and Customs Enforcement (ICE) stop the deportation of She'yaa Bin Abraham-Joseph - 21 Savage NOW!"

U.S. Representative Hank Johnson, who serves Georgia's 4th district, wrote a letter to an immigration judge in support of the rapper.

"I know [21] to be a remarkable young man," Johnson wrote. "He spends his time giving back to our community and has been living a life of paying it forward. I believe that it would be a serious hardship to [21's] family and a loss for our community, if he is not allowed bail so that he can be released from detention. ... He has been an outstanding figure and influence within his family and within Atlanta."

Many in the hip-hop community have also spoken out in support.