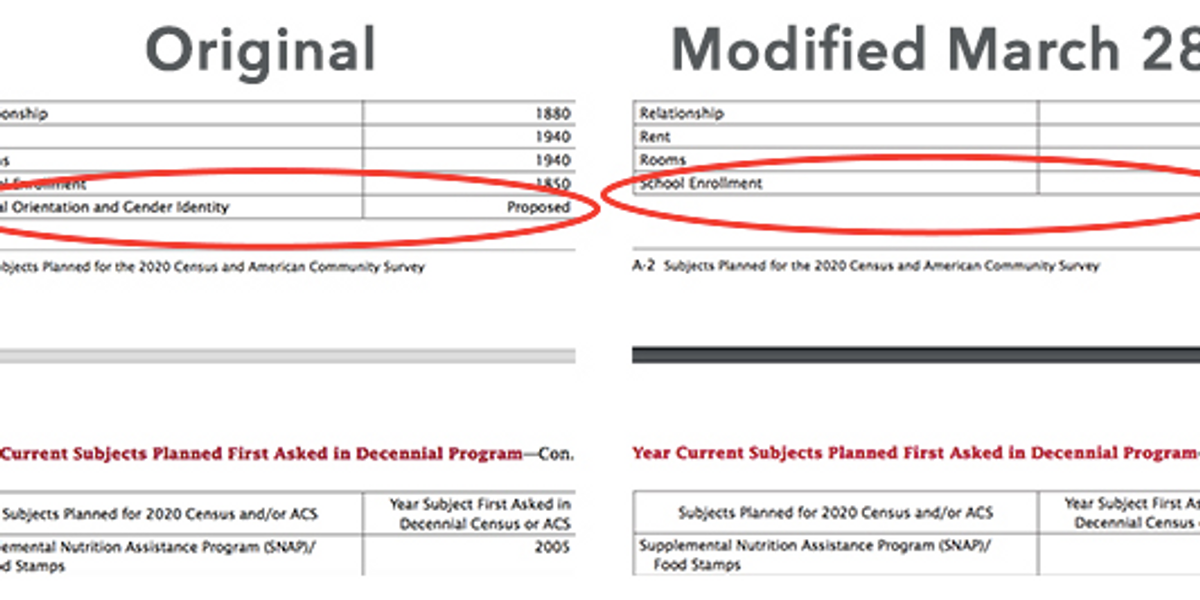 The 2020 U.S. Census will not collect information about gender identity and sexual orientation as expected, Out reports.

The Census, which is mandated by the Constitution and has happened every ten years since 1970, is a tool that can play a big role in deciding how to create fair legislation and allocate resources to U.S. citizens. A question about sexual orientation and gender identity was proposed for the 2020 Census, and an early draft appear to show that it was included. However, the administration submitted its categories on March 28, and the category had been omitted. Many see the Trump administration's decision to exclude the question as a sign that it wants to pretend that LGBTQ people don't exist.

The Trump Administration is erasing "sexual orientation" & "gender identity" from the 2020 census -- but they #CantEraseUs 1/4
— HumanRightsCampaign (@HRC) March 29, 2017

#LGBTQ people deserve to be heard and given a voice just like everyone else. We are equal and Trump #CantEraseUs. 2/4
— HumanRightsCampaign (@HRC) March 29, 2017

We will be seen, we will be heard and we won't stop fighting until we achieve equality for #LGBTQ people. #CantEraseUs 4/4
— HumanRightsCampaign (@HRC) March 29, 2017

Not only would this question have provided valuable information about population distribution that lawmakers could use to legislate more fairly, it would also represent a level of inclusion that the LGBTQ community has sought for decades. GLAAD CEO Sarah Kate Ellis told Out the move is part of "systematic effort on behalf of the Trump administration to erase LGBT people," and others weighed in on the decision too:

This is outrageous. No one should be invisible in America https://t.co/IOaCit7dg2
— Chelsea Clinton (@ChelseaClinton) March 29, 2017

The Trump Administration has removed LGBTQ people from the 2020 census.

Meghan Maury, the Criminal and Economic Justice Project Director of National LGBTQ Task Force, released a statement saying, "Information from these surveys helps the government to enforce federal laws like the Violence Against Women Act and the Fair Housing Act and to determine how to allocate resources like housing supports and food stamps. If the government doesn't know how many LGBTQ people live in a community, how can it do its job to ensure we're getting fair and adequate access to the rights, protections and services we need?"