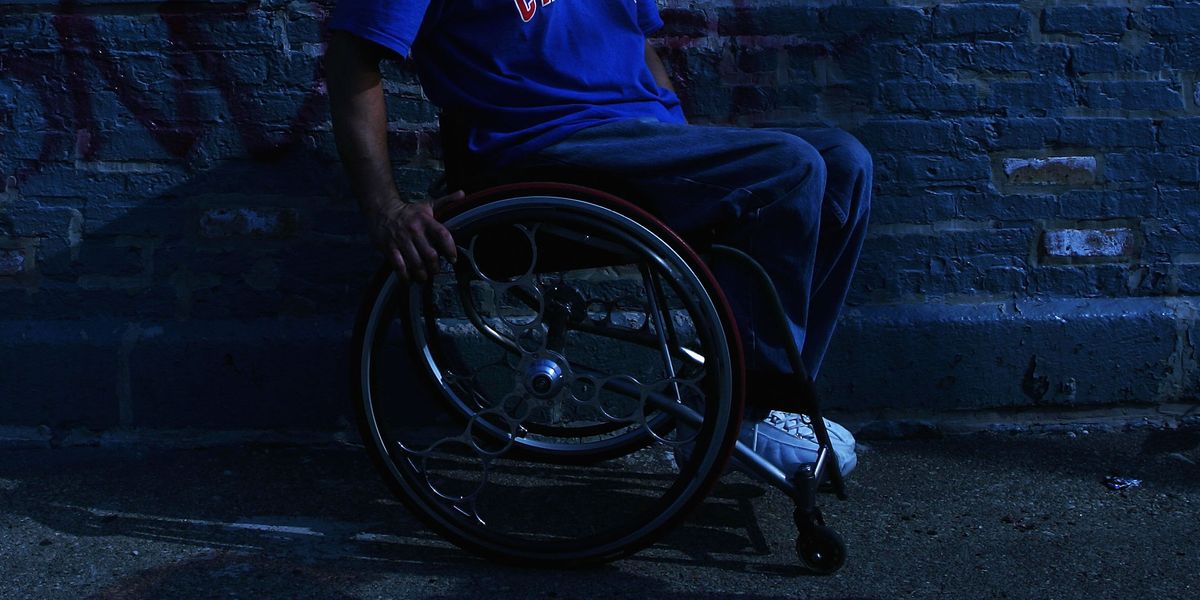 Things to Never Say to the Disabled

I've been temporarily disabled since a bicycle incident in June, and while I've had the privilege of knowing it would all eventually heal, I still got to see from a wheelchair point of view what physically challenged people must go through all the time. Like a character out of Black Like Me or Gentlemen's Agreement—where someone pretends to be of a different ethnicity or race to experience bigotry—I felt the eye-opening brunt of the weirdness, and I wasn't even pretending.

First of all, I used to wonder why my mother was so panicky as I wheeled her around, but now I know; the streets, with their bumps, cracks, potholes, and inclines, aren't really made for the disabled. In fact, a simple ride to the grocery store becomes a madcap Tilt-A-Whirl experience, combined with a romp on the old Coney Island Cyclone. What's more, a lot of the pedestrians coming at you pay you no mind whatsoever and have no idea that they should maybe give you the right of way or at least not crash into you as you try to advance to your destination. It's like something out of a George Romero remake of Dunkirk.

Friends do come and visit you with food and gifts, and normally, you'd never see these people for years, so that's a nice development. But strangers aren't always so lovely. Just a couple of weeks after my surgery, when I was hobbling in a pain on a walker and only able to let one leg touch the ground, I had arranged for a car service to take me to an important appointment. The driver spotted me as he pulled up, but he bizarrely kept going and blithely parked way up the incline of the street! In a complete panic, I yelled out that I could barely move two feet, let alone go up a hill to the car. "Call 911!" he replied, angrily. Huh? Instead, I quickly phoned his manager—while desperately trying to keep hopping in place on my one good foot—and word obviously trickled down because the guy backed up, let me hop in, and was sweet as pie for the whole ride.

Another creepy experience happened when a friend wheeled me to the movies in July. In the lobby, a man spotted me and—without looking at me or acknowledging me in any way—talked directly to my friend, saying, "Hey, I know this guy. I met him years ago at a club." He kept babbling to my friend about me, and I thought he'd finally glance my way and say a word or two, but then he just walked on by! Because I was in a wheelchair, I was completely useless to him, someone who couldn't possibly be able to comprehend or engage. "It's just a broken leg and ankle!" I wanted to yell, but I just sat there, in shock.

Then there are the people who mean well, but can't stop pummeling you with inane questions—"How did it happen? Did you break anything? When do get out of the chair? When will you take off the boot? Will you ever walk again? Will you ride your bike again?" After 11 weeks of this, you want to yell "Just google it," but instead you say, "Oh, it's nothing" and try to change the subject, vowing to never ask someone in a cast or a wheelchair what happened. The truth is, I crave attention, but not for awful mishaps. If people ganged up to ask me what I was working on or what my hopes and dreams (or favorite movies) were, I'd gladly oblige for hours on end.

But perhaps your biggest challenge of all is coping with the quirks of the medical community. I wouldn't let them touch me in the hospital until they assured me it was all covered by my insurance. They still managed to assign an out of network surgeon, and I ended up getting an enormous extra bill for that, until fighting it and being told by the surgeon's office that I merely had to fill out a questionnaire and it would go away.

The care you get is mostly good, but there was that horrific moment in the hospital when they were wheeling me towards surgery and a nurse decided to place a folder that seemed to weigh a ton right against my injured leg. I let out a yelp that implied, "That wasn't exactly the height of sensitivity, you freakin' monster!" On hearing it, she brilliantly took the folder off my leg, as I prayed for my imminent unconsciousness to arrive. Later on, at a post-hospital doctor's visit, I was being wheeled into another room for X-rays when the guy piloting me wheeled me right into a wall. Maybe they want to make sure you have a relapse so you can keep coming back for more visits.

But a whole other head-scratching twist came when I had to go to physical therapy for the first time. "Is there an elevator?" I made sure to ask in advance. "Yes," I was told. But no one explained that you have to go up steps to get to it and down steps to get out. And at this point, I wasn't supposed to do steps yet! Well, I did the steps by going one way on my ass, with my bad leg sticking up, and the other way hopping on my good leg (which was extremely treacherous because it was raining and the steps were wet). It's amazing how inventive you become in order to keep going--and all of that proved to be a form of physical therapy, I guess.

Another bittersweet moment came when the physical therapist grabbed my ankle and said, "Does it hurt?" "No," I replied. "Good," he said, relieved. "But then again, I just took a pain pill," I remarked, sagely. Oh, well. At least you get to the front of the line at Trader Joe's.