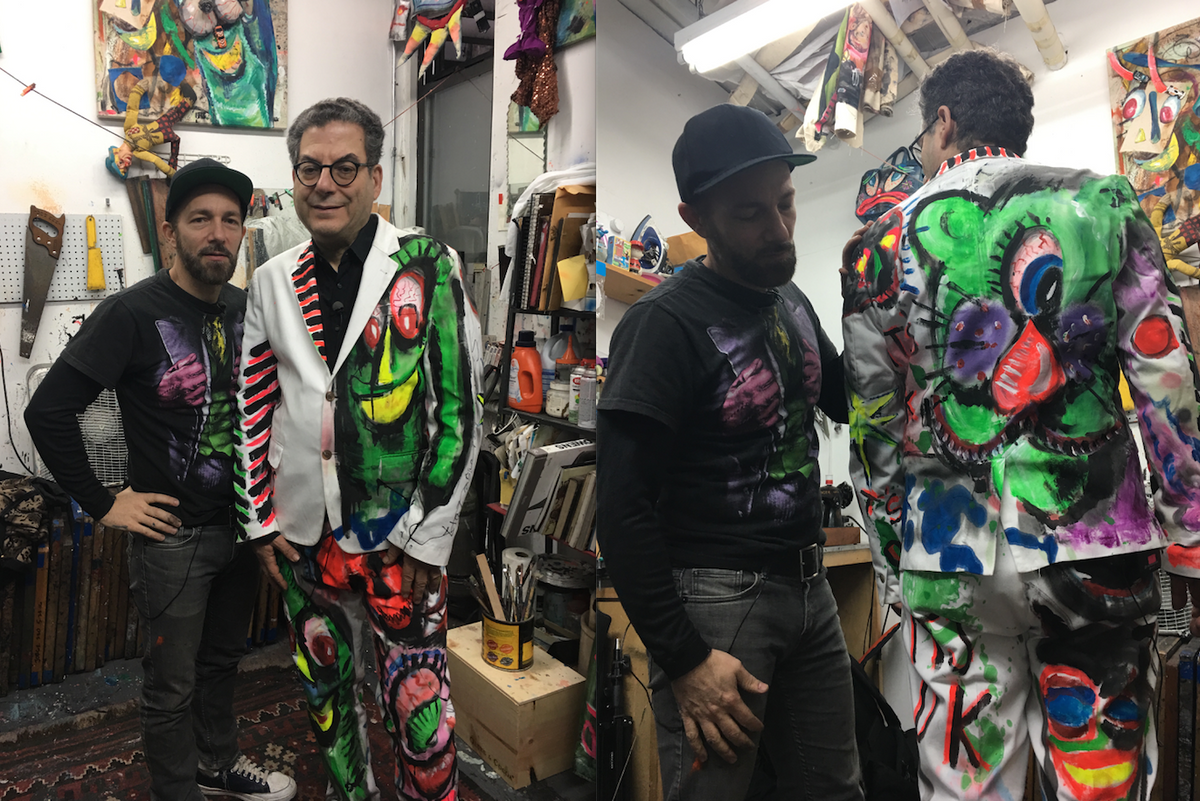 Scooter LaForge Turned My Outfit Into a Work of Art

Scooter and Michael before the suit transformation

In 2013, I was given a white Joe Fresh suit in reward for modeling in a fashion show they had in a flagship store. I loved it because the all-white motif was so different from my usual hallucinogenic array of colorful patterns. It represented purity and cleanliness -- and a sort of Hamptons chic -- in a way that was extremely alien to my very soul, so I perversely enjoyed walking around in it, especially since it was slimming and highly flattering all around. I felt simultaneously sexy and serene in my Mr. Clean-like whiteness, even if I threatened to come off a little too Republican for words.

But when artist Scooter LaForge offered to paint the suit over from top to bottom a little while ago, I leaped at the chance. After all, I love Scooter's work, which is a fantasmagoria of creatures and sayings and detritus, sprung out of a fertile NYC imagination. And besides, I had worn the “purity" thing to death and was ready for a healthy splash of neon already, so this suit would fit in with everything else in my capacious closet. What's more, I was set to do a number in an all-star revue at a cabaret, and one way to guarantee that I would hijack the whole show would be if I wore something so eye-popping that no one would remember any of the other performers. That was my original thought -- until I realized that I should hold off for something even more gala-like to debut this thing. I'm currently waiting for invitations to pour in for amazing events that would be deserving of my fab ensemble.

After stylist Christian Freedom made sure the suit got dry-cleaned -- since Scooter's assignment was to paint over a blank canvas, not a used tablecloth -- I brought the ensemble to Scooter's studio down in Soho. And it was only eight days later when he presented me with the finished result, admitting that he'd jumped into the project with arms flapping. “I know you have a wild side," he told me (as nycgo.com filmed us for a segment on Scooter). “I've seen you in psychedelic patterns. So I made it wild for you!" What he came up with was a zany, day-glow mélange of faces (some looking rather voodoo-like), with lots of popping eyeballs (including one smack dab on my crotch), and arresting stripes, with the expression “It's OK" spelled out twice. “Are you sure it's OK?" I asked Scooter, laughing. “I guess you haven't been reading the headlines lately." But what he did to my outfit provides the perfect jolt of escapism for our troubled times, and as always, his happy messages are peppered with dark tones and wonderful weirdnesses that keep it real. And there are still some stretches of white left!

Scooter assured me that this suit will one day be worth millions, then added “but not until I'm dead." So I'm now working on that, ha ha. “It's just like that Golden Girls episode about Jasper DeKimmel," I cracked, referencing the one about the supposedly dying artist who survives, to the horror of the Girls, who own his painting. But even if Scooter lives forever -- and I hope he does -- this thing is invaluable, and will surely make my twilight years comfortable in lieu of a 401K.