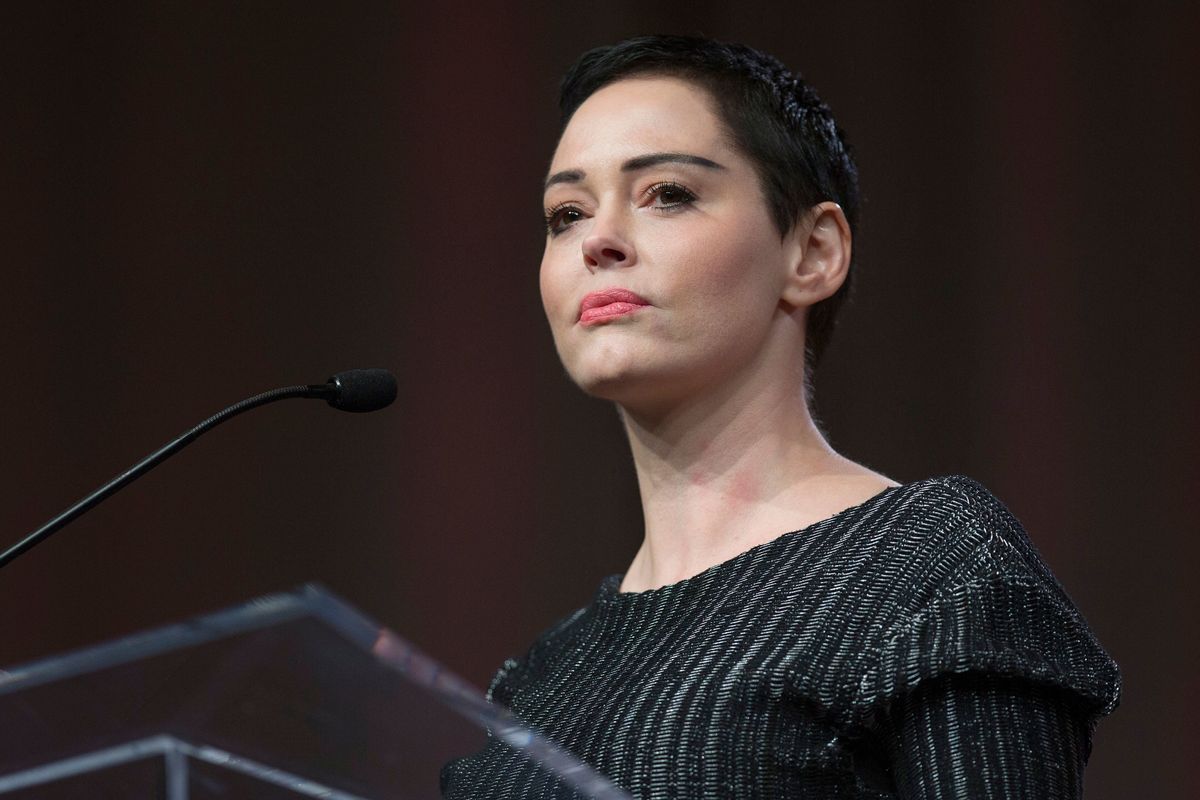 Rose McGowan Tells Trans Woman 'I'm Not From Your Planet'

In what can only be described a particularly bizarre twist of events, Rose McGowan got in a screaming match with a trans woman at a Manhattan Barnes & Noble reading event when said woman asked McGowan what she had done for the community.

McGowan had on the same road cone-orange hoodie she donned for her memorable appearance on Stephen Colbert (she certainly threw him for a loop) and so the evening began innocently enough, with McGowan reportedly answering pre-submitted questions and singing Yo Gotti and Nicki Minaj's "Rake it Up," which she also did on Colbert. Things headed in a more hostile direction when a trans woman interjected and promoted McGowan to address her past comments on trans rights, and what ensued can only be described as unnecessary chaos.

"I have a suggestion," the trans woman began. "Talk about what you said on RuPaul. Trans women are dying and you said that we, as trans women, are not like regular women. We get raped more often. We go through domestic violence more often. There was a trans woman killed here a few blocks [away]. I have been followed home –."

McGowan then cut her off, claiming that she believes cis women and trans women "are the same."

"There's an entire show called ID channel, a network, dedicated to women getting abused, murdered, sexualized, violated, and you're a part of that, too, sister. It's the same."

"You do nothing for them," the interjector retorted. "Trans women are in men's prisons. And what have you done for them?"

The interaction then escalated into a full verbal confrontation, with the trans woman eventually being escorted out by security as McGowan shouted, "I'm not from your planet" and, "you're boring." But it wasn't over then, even after the woman had left McGowan continued on, ranting at the crowd and clearly shaking with rage.

"And you can label this thing as a breakdown. That, motherfuckers, is a breakdown. Maybe not for me, but for you. I might have information you want. I might know shit that you don't. So fucking shut up. Please systemically. For once. In the world. You know what I'm talking about. Just tell the God damned truth. Stop boxing everybody into shit. I didn't agree to your cis fucking world. Ok? Fuck off."

She continued: "Trans women are women and what I've been trying to say is that it's the same. The stats are not that dissimilar. When you break it down, it is a much smaller population. There's not a network here devoted to your fucking death. There's not advertisers advertising tampons with a camera lovingly going up a girl's body as she's being lovingly raped and strangled. Piss off. And until you can collect that fucking check, back up. My name is Rose McGowan and I am obviously fucking brave."

There was a way this conversation might have been broached by both women, but either way recognizing that trans women are recognized by society to be the same as cis women is a gross misstep. Furthermore, screaming "I'm not from your planet" is also problematic for a plethora of reasons. Whatever you choose take from this, it's clear this is the most unhinged we've seen McGowan yet. Watch the full video below.