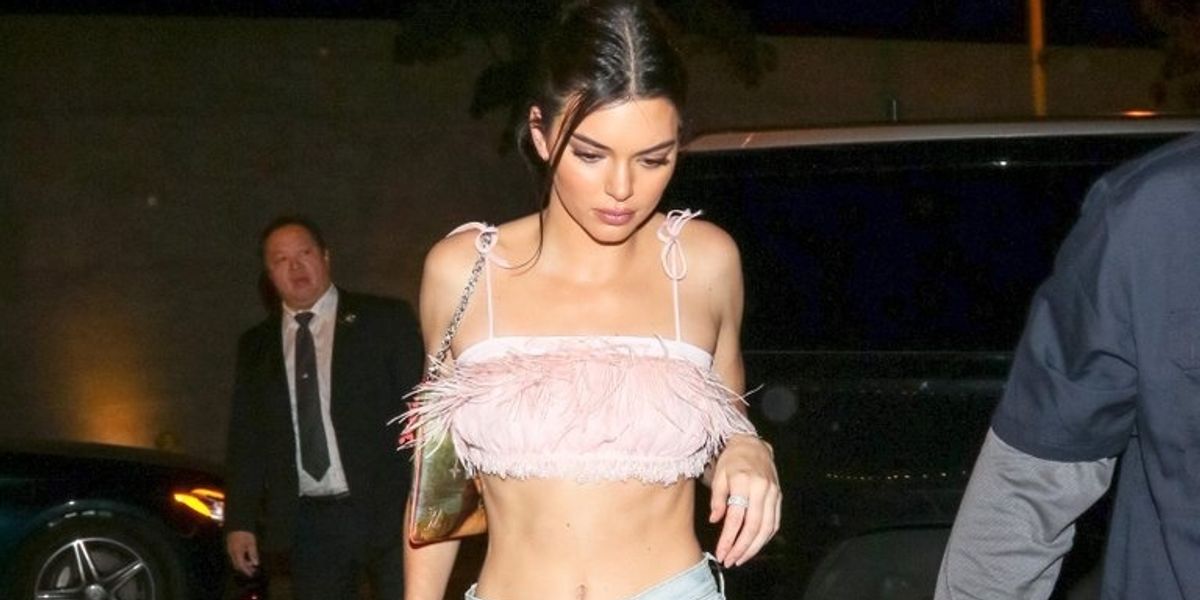 You've Known the Brand Behind Kendall's Crop Top All Along

Kendall Jenner has once again excited the Internet, not because of a new dating rumor or Tupac tees, but as the result of a baby pink, fluffy-tied crop top with lace trim. Not usually does one article of clothing make such a splash, but a collaboration between Opening Ceremony and iconic American lingerie and nightwear brand, Priamo, is definitely something to write home about.

While Priamo Espaillat is far from breaking out, it's certainly breaking boundaries. Founded in 1978 by Priamo, who fled the Dominican Republic in the midst of a civil war to make it in New York City, the brand is benchmarked on its embrace of Victorian-era designs.

Each style has the capacity to immediately transform you into a silent horror film's glamorous damsel in distress, or a 1920s go-go dancer in her boudoir. Now the brand is poised for a massive resurgence, recruited by Opening Ceremony directly for a capsule collection, and creating pieces to take you from the bedroom, to the club and everywhere in between.

Priamo co-owner Alise Ninivaggi talks the future and flexibility of fashion, below.

Priamo has been such a staple in American nightwear. What's the key to surviving in the ever-evolving industry?

The key to surviving in the ever-changing fashion industry is flexibility, and letting that understanding inform your choices as you go along. That being said, before you can be as flexible as is necessary, you have to first develop an offering of products that are compelling, well-made, well-designed, comfortable, and fit perfectly — therefore justifying your price point. Our legacy is one of passion and integrity, and is prolific. Priamo has designed tens of thousands of silhouettes, from a jazz-era inspired silk bralette to a woven terry double-breasted blazer, and everything in between. It's also a classic "American Dream" story realized. Priamo's insistence on maintaining his creative freedom, and not letting anything or anyone get in the way of that, is an inspiration. He's achieved something so rare.

PRIAMO on Instagram: “Cat’s out of the bag and into her pajamas! We’re proud to announce our exclusive collaboration with @openingceremony - available at all OC…”

How did the Opening Ceremony collaboration come to fruition?

We received an inquiry from the buying team, and had an in-person meeting at the factory in New Jersey. It was a true collaboration from the start, and working with the OC team is one of the most exciting moments in our history. The development process was so enjoyable – it was a lot of work of course, but that's always the case – because our suggestions and design ideas were so well received. The styles were selected and developed by the OC team for their ability to be worn as streetwear, as well as sleepwear. That has been a recent goal of ours, it's how we see ourselves continuing to fit in with the changing times. Each time a style was finalized was a mini victory celebration.

PRIAMO on Instagram: “Booth 619 @curvexpo Come check us out today or tomorrow!”

What are your thoughts on current lingerie/nightwear landscape? What has been the biggest shift in this specific sector of fashion?

The biggest shift in this specific sector of fashion has definitely been on the consumer side. Market share is extremely tough in our category. Fast fashion is reigning supreme, and when handled improperly the results are catastrophic. We want to support the industry by leading by example – slow fashion and being efficient with our resources. But, we're hopeful that the new retail landscape, although challenging, will ultimately allow us to prevail as we always have in the past. Old rules regarding brands are totally broken in most cases, and the push away from being a faceless entity is a positive one in our opinion. Now that we can find our customers simply by adding specific hashtags to public posts on different platforms, we can also be a bit freer to be ourselves, since our target customer is the type of person who's into that level of engagement with their favorite brands.

PRIAMO on Instagram: “The beauty of the details ✂️🎀 Priamo for Opening Ceremony / 📸 from openingceremony.com #priamo #openingceremony #lingerie #fashion…”

Before we say anything else, Cardi B. If Cardi B is reading this, please contact us so we can show you some of our sick vintage pieces and unreleased new styles. We've been big fans of hers even prior to her recent fame. Her relationship to fashion so far is also super fun, it's fun to watch for what she will wear next. Though, the most exciting thing now is not actually about fashion. Or, not just about fashion. It's hard to talk about what we do when the world feels like a very dark place, and what we do is supposed to bring comfort, sweetness, and light into people's lives. It's better for people who follow our brand to know where we stand politically, and ethically, which is a new and potentially scary thing. It's the opposite of how it was before, when it was completely taboo to associate people with a brand. But, that degree of interconnectedness might be one of the things that can help us overcome what we as a society deem unacceptable.

What has the reaction been like to Kendall's recent appearance in Priamo? How important is social media is a brand's exposure today?

Again, before we say anything else, thank you Kendall. We were utterly floored at the positive response to Kendall's recent appearance in our bralette. Kendall's the most-followed model on Instagram, which gives you a clue as to our thoughts on social media and its importance in regards to a brand's exposure today — it's very important. A great photo of your piece in motion, on different people, is the whole purpose of what we do in the first place. You can know our product by shopping it online, but you can understand it by seeing how real people wear and style it. That's the whole point of fashion, to be in a visual dialogue. Being able to maintain that dialogue globally is a dream come true.

Priamo really privileges traditional styles, designs you might find in a 20th century Dracula film, what do you think is behind the re-embrace of more conservative nightwear?

We love that! We think the reason for the re-embrace of more conservative nightwear is a reaction to our times – we're experiencing retro influences in several different eras at once, because fashion trends no longer "need" to agree. The rules are, there are no more rules. Fashion emerges from culture, and, culturally, we're at a milestone era. There's more access and therefore more texture and more ideas, and more room for Dracula-era inspired nightgowns. We do think there is an intersection between the imagery of "woman", the long-fought against half of an arbitrary gender binary abd a new world where women are takin steps toward equality. Nothing is more "woman" than girly, frilly, lacy, Victorian-inspired silhouettes, and wearing that garb can at times be a middle finger to that.

2018 marks our 40th anniversary, so we have plans to do some special edition re-issue pieces. Our designer is launching an accessories brand under her name, which we are super excited about. So we'll have more bridal and special occasion handbags and accessories added to the Priamo line, too this year.

Describe the Priamo woman — what is "sexy" according to Priamo?

The Priamo wearer is a firebrand. She is intellectual, yet elegant. She is down to wear something that is secretly comfortable but doesn't look it. She wants to mix and style herself with feminine pieces, but doesn't worship the traditional cult of femininity. She seeks to redefine it. Being a badass is sexy.