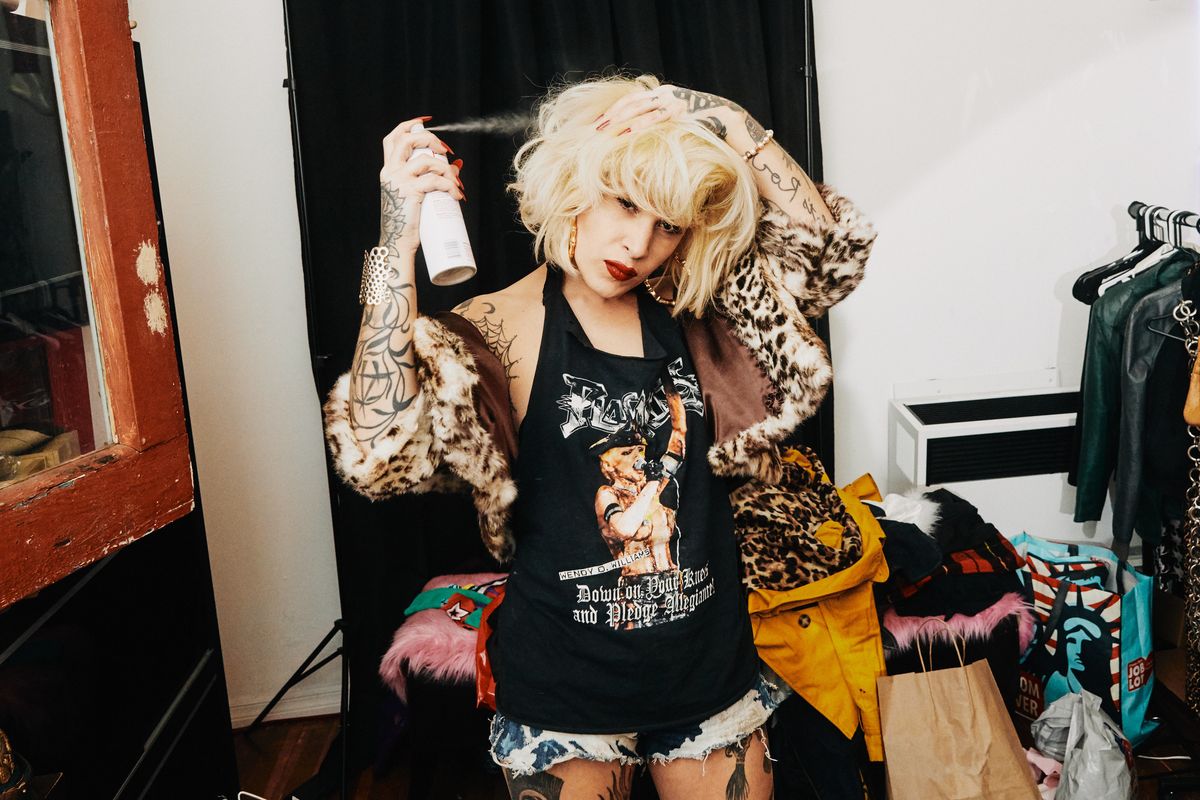 Mz Neon Is Punk to Her Core

In it, Neon skewers "the motherfuckers who did me wrong," while celebrating the sacredness of raw trans femme sexuality. It's impossible to argue with the power of lyrics like: "Dick hard in a thong like a champion/ Never strapped on."

"Pussy Stick," part of a forthcoming project, represents both a bold reclamation of self — a theme present throughout Neon's career — and a departure from her heavier rock-laced synth-pop music. But make no mistake, Neon is punk to her core.

To capture this turning point in her career, Neon's old friend Adam Amengual recruited his brother Derek Amengual and his wife Kate Emerson, a DP and editing duo. The three worked with Neon to create a short documentary, simply called MZ NEON, which premieres today on PAPER.

"My brother and I hung out with Neon for several days over a few months, and during that time she started working on the rap project," Adam says. "She's described it as her most personal work yet so it was amazing to capture her at this point in her life."

The film shows its star traversing the streets and stages of Los Angeles, and getting dolled up at home. Neon talks about her start making music, a one-woman production process that begins in her bedroom and breathes on the stage or on camera. While smoking cigarettes and teasing her hair with spray, she mentions the legendary wild women of shock-rock who inspire her artistically and spiritually.

"Lil' Kim, Courtney Love, Wendy O. Williams, were just raw and unapologetic," Neon says in the film. "[They represented]... the girls you were afraid of. Women weren't supposed to act like that... I was very nurtured by these iconic women giving me the validation that I could lead that kind of life myself."

On the first days of shooting, Neon spoke candidly with her film crew about her various stages of transition. "I felt really comfortable opening up to Adam about my life and journey as an artist in this highly transitional stage of my life; in reference to my gender and newfound home in LA," she says. "A lot of incredible new opportunities and live bookings opened up through putting this new project into the world; and the synchronicity of working with Adam, Derek, and Kate was in perfect alignment to document this turning point in my creative and professional life."

Elsewhere in the film, Neon outlines what she hopes songs like "Pussy Stick" and those coming from her new project can achieve. "I'm trying to eradicate the double life of sexuality that is perpetuated so much," she says. "If you're a chick with a dick and you're cool with that, be cool with that. Show people how to be cool with that. I want [what I'm doing] to be seen as openly sexy and celebrated. This is about taking the power back from any situation that has ever tried to marginalize me or put me down. I'll always spread that message of fearless self-love, because I need that, too."