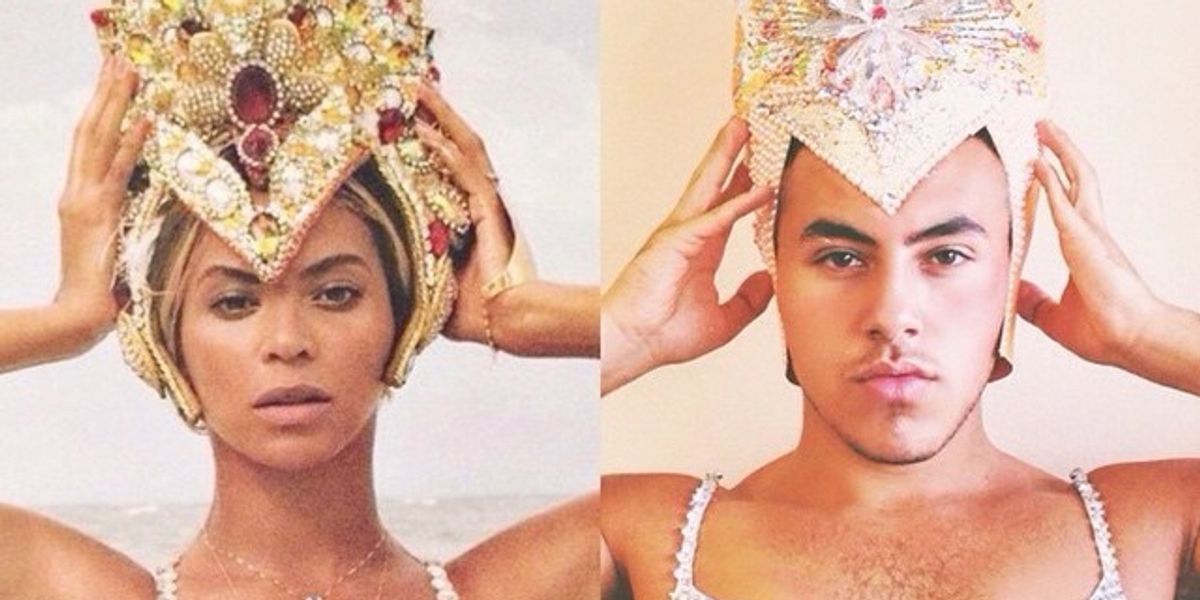 When Mina Gerges first went viral in 2015, it was for his fabulously funny homemade recreations of looks by the likes of Beyoncé, Nicki Minaj, Rihanna and Kim Kardashian. Sometimes mistaken for a parody account, Gerges' positivity brought to life a playful sense of confidence that was all the more inspiring given the background of the creator: growing up LGBT in Egypt (before he and his family moved to Canada) was no easy feat. As his Instagram star rose, with the increased visibility came extra bullying, with commenters coming for a Middle Eastern man in makeup who appeared totally comfortable in his skin.

The bullying took a toll on Gerges, who ended up deactivating his account for eight months to take a much-needed mental health break. "I used to obsessively Facetune my body in my pictures in fear that people were going to make mean comments about it," Gerges said. "During that break, I worked on embracing my stretch marks and everything else I was bullied for. When I reactivated my account, I stopped Facetuning my body."

A new survey by the National Eating Disorder Association found that more than half of LGBTQ young people surveyed had been diagnosed with an eating disorder, with transgender youth at a disproportionate risk. When Gerges came back to Instagram, he turned his focus to promoting the sense of body positivity he had found so lacking on the platform before, and inspiring the thousands of young people that followed his account. We spoke with Gerges about overcoming self doubt, why social media is bad for mental health and breaking down the stigma around male eating disorders:

What do you believe contributed to your eating disorder?

Growing up, I never saw men who looked like me in magazines or in movies so I always felt invisible. We're used to seeing representations of men that set up impossible standards and imply that the only men who are entitled to being considered attractive and being seen by the public are white and thin. When I was 16, I became convinced that the only way people would think I'm attractive is if I looked like that, and without knowing it, I became obsessed with looking like these men. I started starving myself, spending three hours at the gym and running 10km everyday, obsessing over getting a six-pack at whatever cost. I would screenshot pictures men with six-packs and use them as my phone background, and if I wanted to eat something indulgent, I would look at my phone background. I couldn't look in the mirror without comparing myself to those pictures, and I would criticize every single part of my body that didn't look like them. It makes me sad to think about how much I punished my body and hated it for its inability to look a certain way.


So often we only think of eating disorders as affecting cis women. Why is that a dangerous misconception?

It's dangerous to think that men aren't affected by eating disorders, and sadly, there's a huge stigma around guys with body image issues and eating disorders. We're conditioned to be silent about these things because "real men" shouldn't be vulnerable, and it's a product of masculinity being so fragile and so toxic. When I was at the height of my eating disorder, I felt so unbelievably alone, both because I didn't see men talking about this online, and because my parents told me that "boys don't get anorexic, that's just for girls." I used to feel like there was something wrong with me, like why am I struggling with my eating or why do I hate my body so much? But I had no idea how to get help to break out of this cycle of self-hate. I felt like if I talked to anyone, that they'd judge me and they wouldn't understand. But the reality is that men do experience eating disorders, and a large portion of those men are gay.

How did you move past bullying and negativity and into a place where you're comfortable with yourself?

The biggest thing for me was taking a break from social media. I needed to stop seeing shirtless men with sculpted bodies who got thousands of likes and had millions of followers on my explore page. I stopped reading mean comments about my body online—those truly ruined my self-esteem and made me hate leaving my house. Taking a social media break and learning how to exist without feeling like I'm constantly being criticized for the way I look was the best thing I could've done for my physical and mental health.


What do you wish the LGBT community would understand about body positivity?

If there's one thing I've learned from sharing my posts recently, it's that there are so many gay men who've been through what I've been through. There are statistics about how prevalent eating disorders and body image issues are amongst gay men and I'm seeing that firsthand through the comments or DMs I've been getting. Gay men are taught to idealize that fit, sculpted body because it's the only kind of body we see all over ads for dating apps like Grindr or on event posters. It filters into the kind of attitude people have when they write "no fats no fems" in their dating app bios, and it's evident when you see the Instagays who post shirtless pictures to their thousands of followers who idolize their bodies. I hope that as a community, we can dismantle these problematic attitudes that so many have normalized and work to be more inclusive and diverse.

What do you wish the world at large knew about it?

It's important to acknowledge that we're constantly surrounded by images that create unrealistic body standards for so many of us, and we're left feeling undesirable unless we become versions of those images ourselves. And this isn't just an issue affecting men in the LGBT community—that's why it's so important for us to start talking about this.

Ultimately, what is your goal with this project?

We still don't see men of different shapes and sizes, men who have stretch marks, rolls, or love handles on billboards or in fashion ads. This erasure says that we're supposed to remain hidden, that we don't deserve the visibility or love or confidence that men with chiseled bodies do. My goal is to redefine what it means for men to feel beautiful or be considered attractive. I want to show that boys who look like me and have been through similar journeys with their body image can find confidence and learn to love ourselves and feel beautiful even if we don't look like conventional representations of men. I want to start important conversations about why we are conditioned to think that only one type of body is considered attractive. I want to be the person whose posts I needed when I was 16 years old.

For more resources on how to deal with an eating disorder, head here.