Busting through the door of New York City's Mercury Lounge came Lennon Stella, a bright and bubbly 19-year-old with dark flowing hair and a Starbucks cup in-hand. If you don't know her from CMT's Nashville, you'll remember her first viral mark on the world — a 2012 YouTube cover of "Call Your Girlfriend" accompanied by her younger sister, Maisy.

Since then, Stella has released several singles including "Polaroid," featuring One Direction alum, Liam Payne. Her five-song EP Love, me came out in November 2018, and she has already garnered nearly 9.5 million monthly Spotify listeners.

Lennon and I quickly bonded over our age and love for leopard print pants as we made our way to the venue's green room downstairs. Graffiti and stickers covered the walls, while we sat down to chat about her new EP, family, and the future.

What has is been like to put out Love, me — your first EP — and have it be so successful?

Man, it's still hitting me, to be honest, that it's out into the world. It's just been such a long time coming. Just writing the songs for so long and just the idea of putting out an EP — it was in my head for so long, it's so weird that it's actually happening. And then having the shows and people singing along — it's all very, very surreal. But, it's beyond exciting. I'm super stoked about it.

Can you tell me a bit about your writing process?

These songs kind of came over the course of — I think it's been the last year and a half. They were all different writing sessions. LA, and two of them actually came from this writing retreat that I went to in Nicaragua, which was amazing. So that was a really cool little experience. I only did three songs on the trip and two of them ended up on the EP. It was the most magical trip. But like all of them have just been me, a producer, and another co-writer writing [about] true experiences that have happened to me.

Which was the most difficult song to bring to life on the record?

For me, it was "Breakaway." I mean they're all super personal, but that one was [especially so]. It was like my family and a tough time I was going through in myself. So that one was the hardest to put into words and also release into the world. Everything is not all great all the time. So that one was a bit harder for me, but I think it's important to be vulnerable and honest in music. 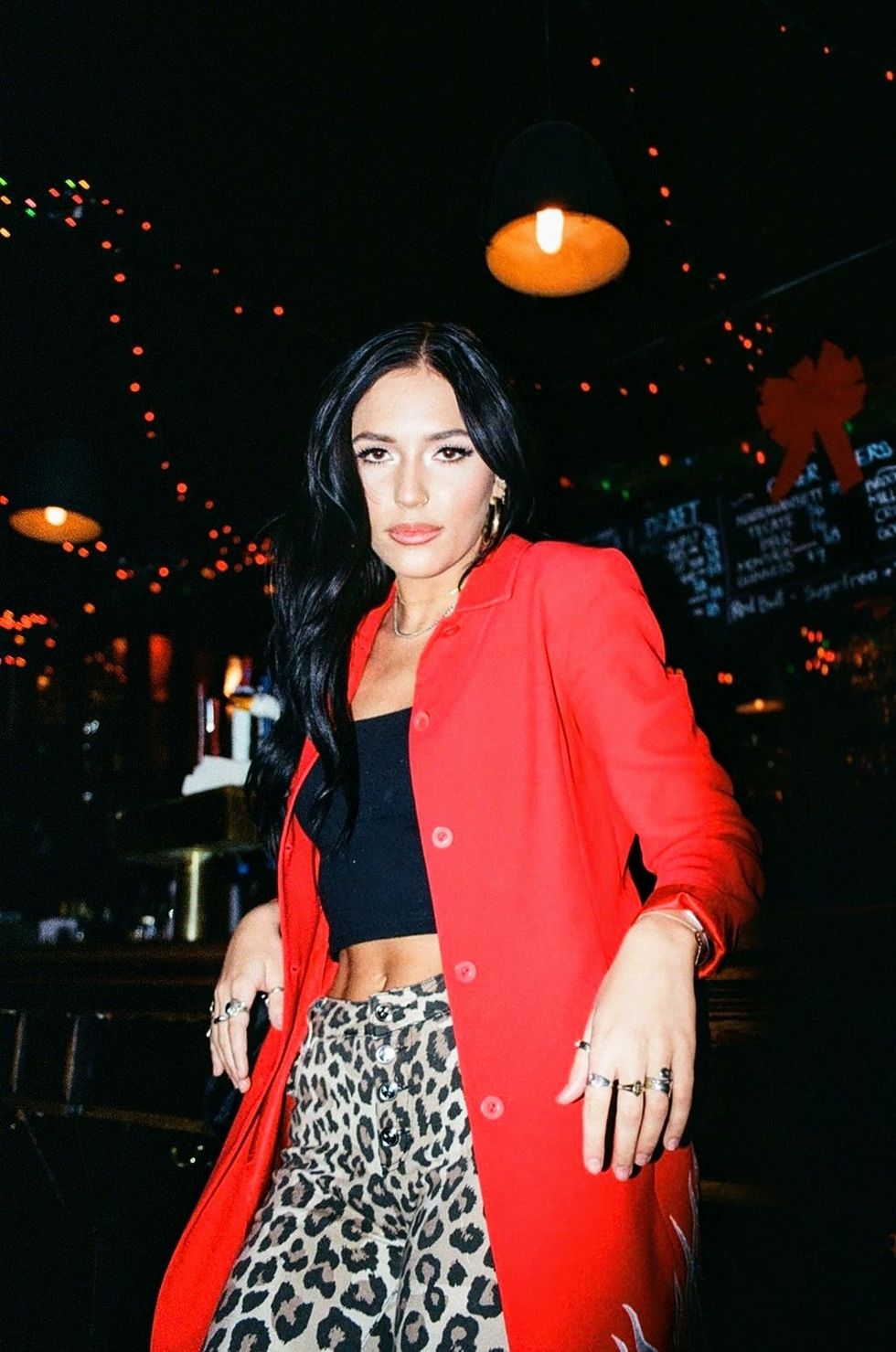 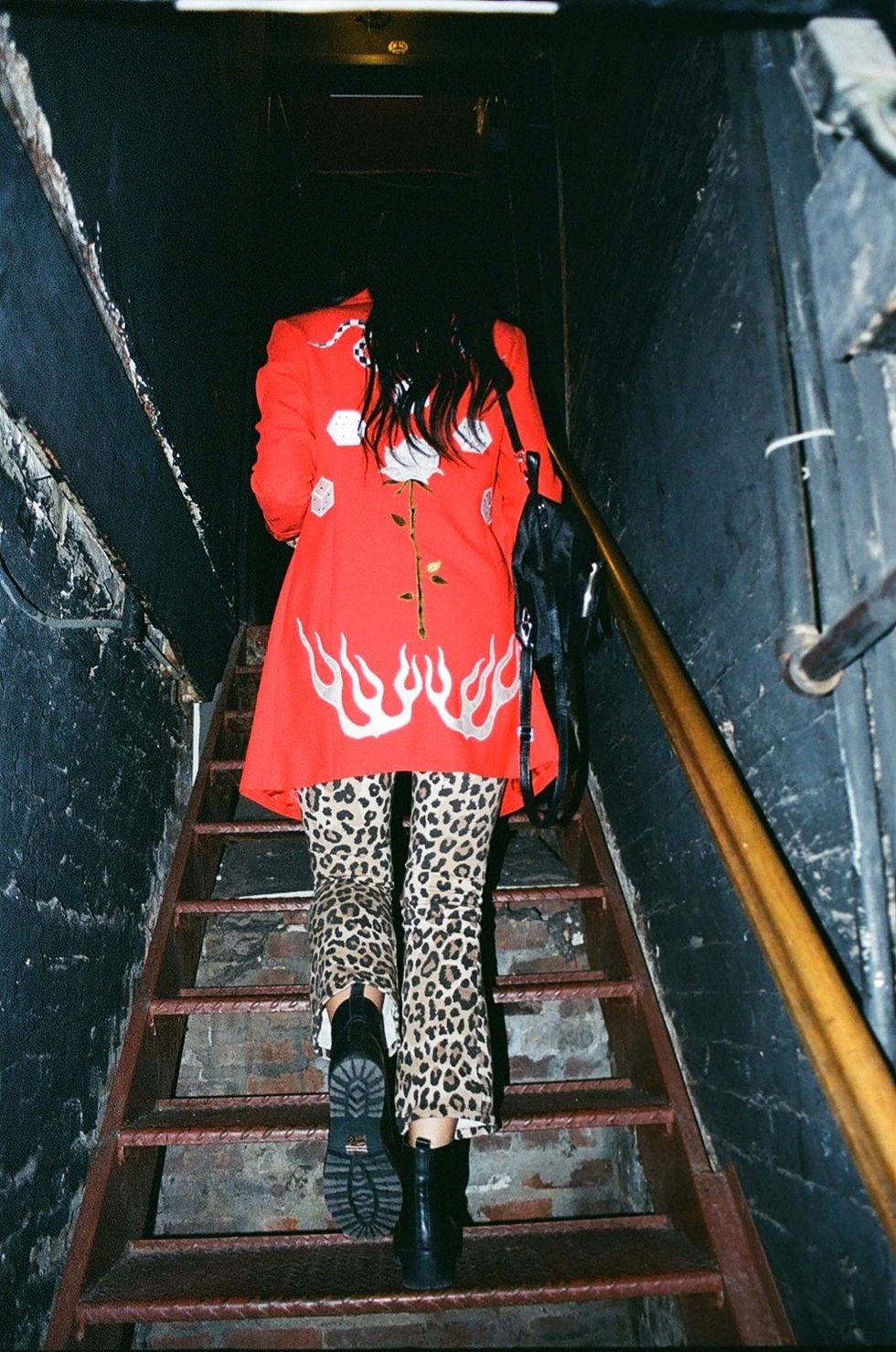 Who would you credit as being your biggest musical influence?

A lot of your fanbase is within your age range. What does that feel like? Is there a pressure to correctly represent what they're going through?

That's an interesting thought. I feel like, yeah in a way. At the end of the day I want to do exactly that — just speak how I feel. Then, I think it will be relatable because I am a 19-year-old girl going through normal 19-year-old girl things. I think people can relate to natural human feelings. So, if I just feel them and write them, and then I think — people have told me this — it's really cool that they feel like they think what I say and I'm kind of putting it into words for them. That's such a cool thing to be able to help someone through whatever they're going through through whatever I was going through. I don't necessarily look at it as a pressure, more so that it's a cool thing, to be honest. I'm just going to continue to write how I feel and then people will feel it too.

What has the transition been like going from being an actress to a full-time solo artist?

It's been a lot smoother than I would have imagined as a 12-year-old thinking about this as the future. I wouldn't have imagined it to be so smooth. It happened really gradually, which made it not a jarring transition. And I think the show wasn't an abrupt end either. Again, it was gradual. Everyone knew going into the last season that it was going to be the last season. I think because of that I made that shift where I was like, Okay cool I'm going to start writing for myself, and that whole new solo stuff — just setting that up so that when the show ended I was in the place where I was ready to go into my own world of music.

Do you feel like this EP the first time you are able to fully showcase yourself to your fans?

100 percent, yeah. I mean, it's just the first time that there's been an actual piece of something that feels really authentic to me — just all together. Up until now it's been just a bunch of random things, you know. And now there's this little chunk of five songs. And they're all together and they all feel super authentic to me. 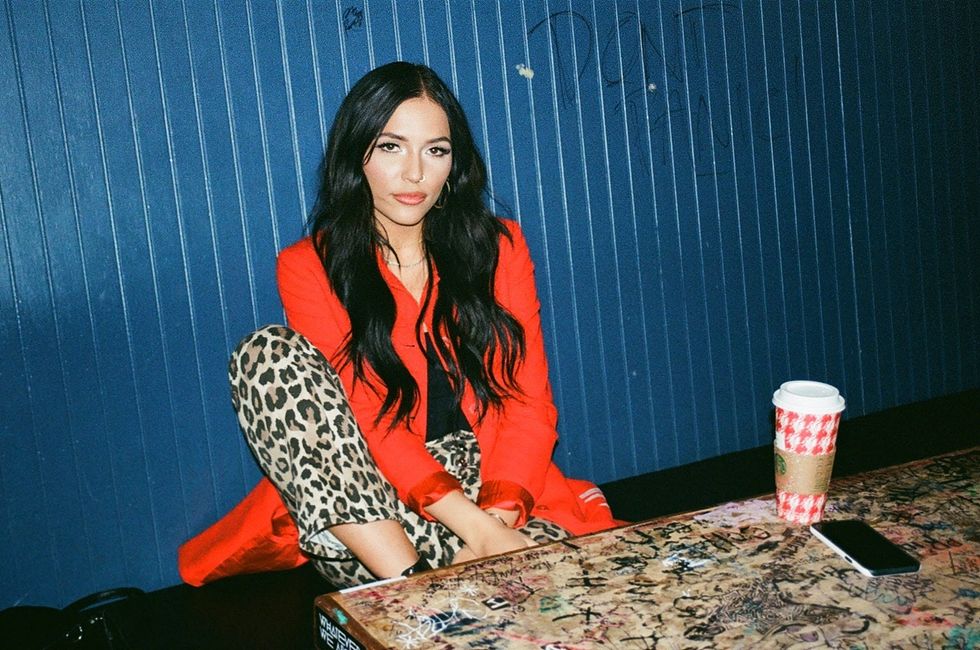 Maisy Stella is obviously such a huge part of your life, how has she been in this journey for you as you embark on your own musical venture?

At the end of the day, I always think about it, as two sisters, regardless of if we made music together or anything. Sisters or siblings in general, it's hard for each other to be supportive and not jealous and not competitive, and like, there's zero competition. The fact that she's, you know, four and a half years younger, there's totally 1,000 percent just excitement. She's so stoked for me and she is so a part of it with me. It's so rare and so special. Honestly, it would make it so miserable if that wasn't the case cause we're so close. It would change everything for me and my life if she wasn't the way she is. So it really affects me how she's genuinely excited for me. I feel super lucky.

Do you think you guys will collaborate in the future?

Yeah, 100 percent, years from now. She's 14 so she needs to explore herself and not feel like she needs someone to lean on. As a human it would be damaging to anyone to be, from the time she was eight years old she started on the show [Nashville], until adult life feeling like you need someone to lean on. So she's gonna explore herself, discover herself, I'm gonna discover myself, and then probably come back together.

The "La Di Da" video with her was so authentic and sweet, what made you settle on that concept?

Honestly, I just thought [of] something fun. "Breakaway" was so perfectly exactly what I wanted in my head and there was so much prep in it and it was such a thing. I thought for "La Di Da" just to do something fun — and that's what we do anyways: sit in the car and dance to music.

So as far as tour goes you've had this little jump around from Nashville to LA to here [NYC], what has been the most memorable moment for you so far?

I would say the first minute of walking onstage at the first show in Nashville and having everyone sing along to "Like Everybody Else." It was one of the most surreal moments of my entire life. That song is so close to me, and hearing and seeing everyone's faces just singing that song so loud... that was my first time ever being on stage singing those songs, that was just such a crazy moment. I was just like, Please don't cry, please don't cry. 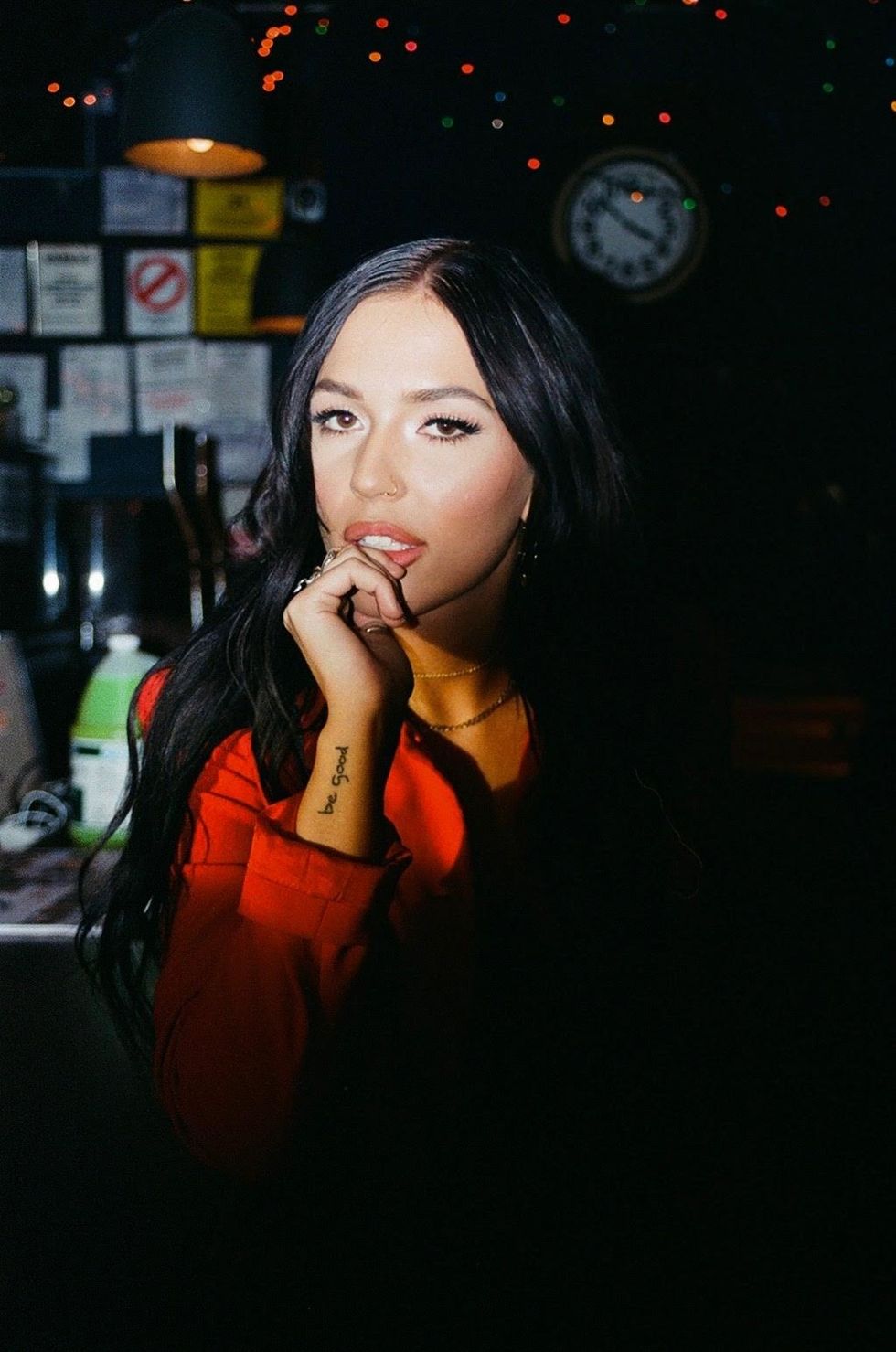 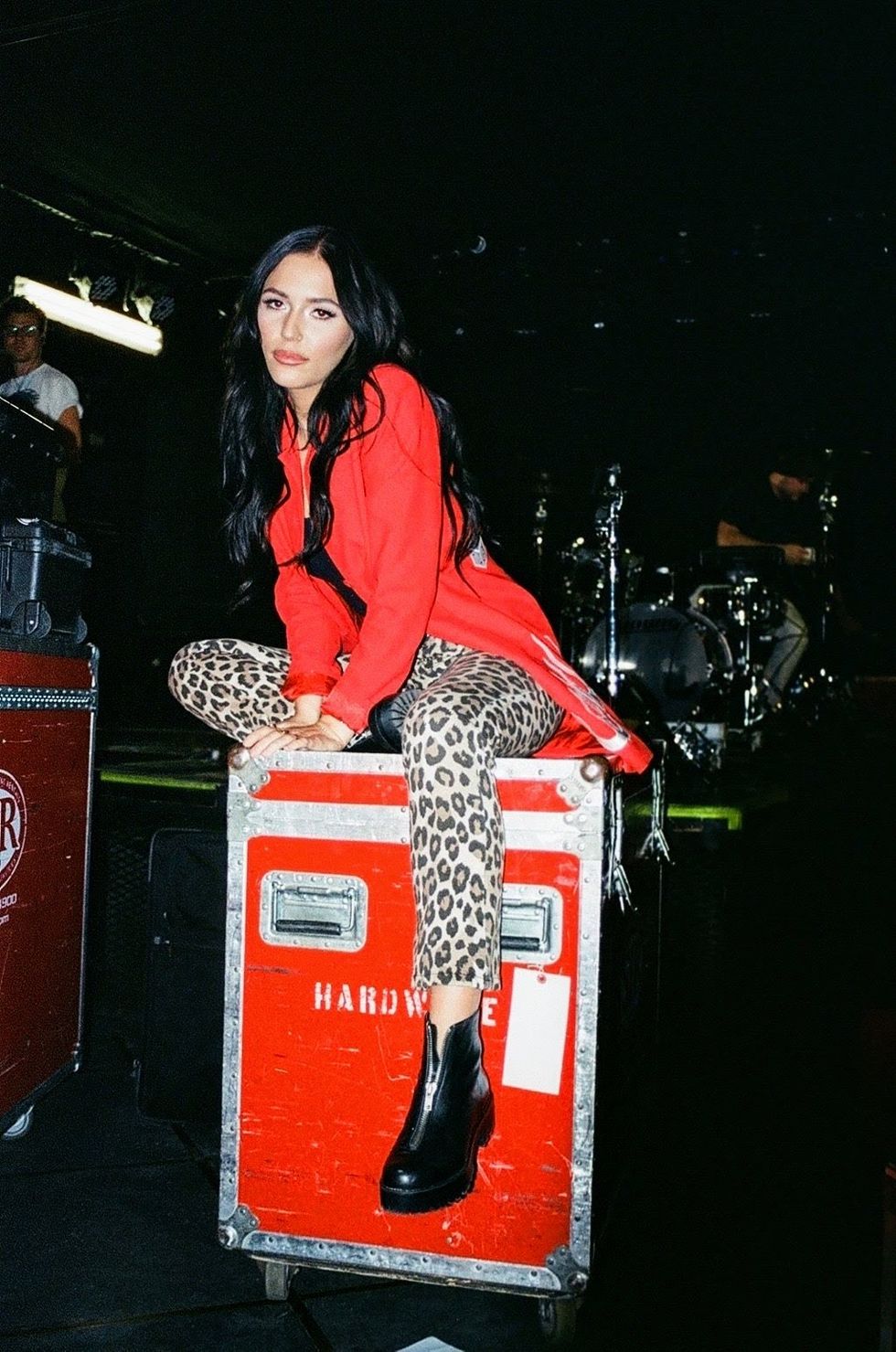 Do you have anything that you do before you go on that gets you in the right mindset to perform?

I thought that I would be like, I need to be alone, but it's actually been so fun cause the people — the band, the singers — it's such a good vibe. We all just hang out and get each other stoked. I like to be alone to get space and then do things, usually. I'm very in my own head and it's not been like that, which is interesting. I'm like re-charging with them. It's been a lot of fun.

How do you think your younger self would react if she could see you today?

Oh my gosh, I feel like my younger self wouldn't of even been able to muster this up in her brain. Just because it's all happening really, really fast. I feel like I wouldn't of thought that I would have had an EP, and feeling proud of it, at 19. I wouldn't have thought I would have been that young to feel really proud and feel like I have it kind of locked in. So yeah, I would hope that my younger self would be like, go Lennon!

Since you are so young and you have already explored so many creative outlets, where do you hope your career will go in the future?

I want to make much more music — just make albums and tour the albums, and that's what I want to do for the next little bit. I hope later down the line, I'm at a good point with [music], I would love to explore different indie movies and stuff like that.

Stream Love, me by Lennon Stella, below.