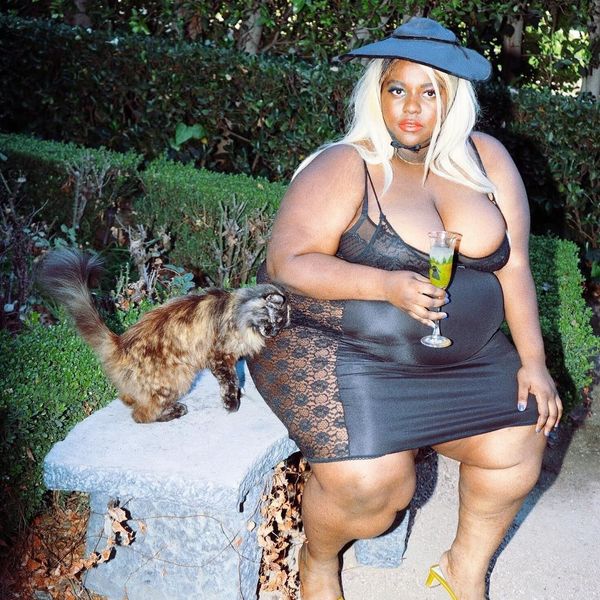 La'Shaunae Signing to Revolt Is a Win for Curve Models

Model and body positivity activist, La'Shaunae Steward, has been vocal about how not fitting the typical proportions of a runway model shouldn't be an automatic disqualifier for aspiring talents. A designer as well who recently collaborated with Jeffery Campbell on a collection of shoes, La'Shaunae also recently started a new platform, Inclus Models, to help promote models "who don't start at 5'8" and "don't end at size 18."

A fierce advocate and outspoken critic of an industry that historically has championed an unattainable and unhealthy beauty standard, La'Shaunae announced on Instagram this week that she had been signed to London's Revolt Model Agency. It is a huge victory for petite and curvy models everywhere that have been struggling for recognition in the industry.

"I grew up being told that things like this would never happen for a girl like me and I'm amazed and so proud and happy for myself," La'Shaunae said in her Instagram post. "To all the ones who are still in school and being bullied for not being thin, and you have a dream that many people tell you is impossible, do NOT give up."

PAPER caught up with La'Shaunae to chat about her momentous signing, what she hopes to accomplish going forward, and her advice for others looking to follow in her footsteps:

How long have you been modeling?

For about four years!

What sort of gigs or projects were you doing up until this point?

I wasn't doing anything up until last year! I had no following and things have always been really slow so I was always focused more on designing because I knew I didn't need an agent or anything for that. I mean, I didn't need an agent for modeling and every work opportunity I've gotten has been on my own but I knew being with an agency could possibly help a lot.My first shoot ever was with Refinery29 last year and I was extremely overwhelmed and nervous. Ever since, I learned to be more comfortable in front of cameras and it gets better every time.

How have things changed since signing to Revolt?

A lot of people who have rarely communicated or rarely supported me have been commenting on my photos and I'm finally being considered a model after many many articles calling me a "blogger" or just an influencer when I'm not. But then some things have also not changed so much, models I appreciate and look up to still treat me like I'm not worthy or on their level and it hurts.

Do you see yourself as being part of a broader shift in attitudes in the fashion industry?

Hopefully yes, but I can still feel that "don't care" attitude when it comes to me being probably one of the first black models over a size 20 to be signed to an agency. I was expecting more acknowledgement of this but haven't! I want this to be more of a reason why curve models under a certain height and bigger than a certain size are often being signed. I want this to make a change and I don't want this moment to just be under-appreciated and swept under the rug by so many people in the modeling and fashion industry. With this happening, I want to see a shift in who they put on magazine covers. I want to see size 20+ models being signed. I want to be booked for things in different states and countries.

What are some dream projects that you would like to take on now that this has happened?

I want to be a curve insider for ASOS. I want to be shot by Nadia Cohen and Petra Collins. I want to be on the cover of magazines for October (because its my favorite and lucky month). I want to just live my best life and be booked for amazing shoots and work with icons.

What would be your advice to other aspiring models and designers looking to break in?

Don't let rejection be the reason you give up on yourself and what you want for yourself because a TON of people may reject you or say hurtful things or do mean things online to try to take away from who you are but you cant let it stop you. If you see yourself as a star, you will be a star.