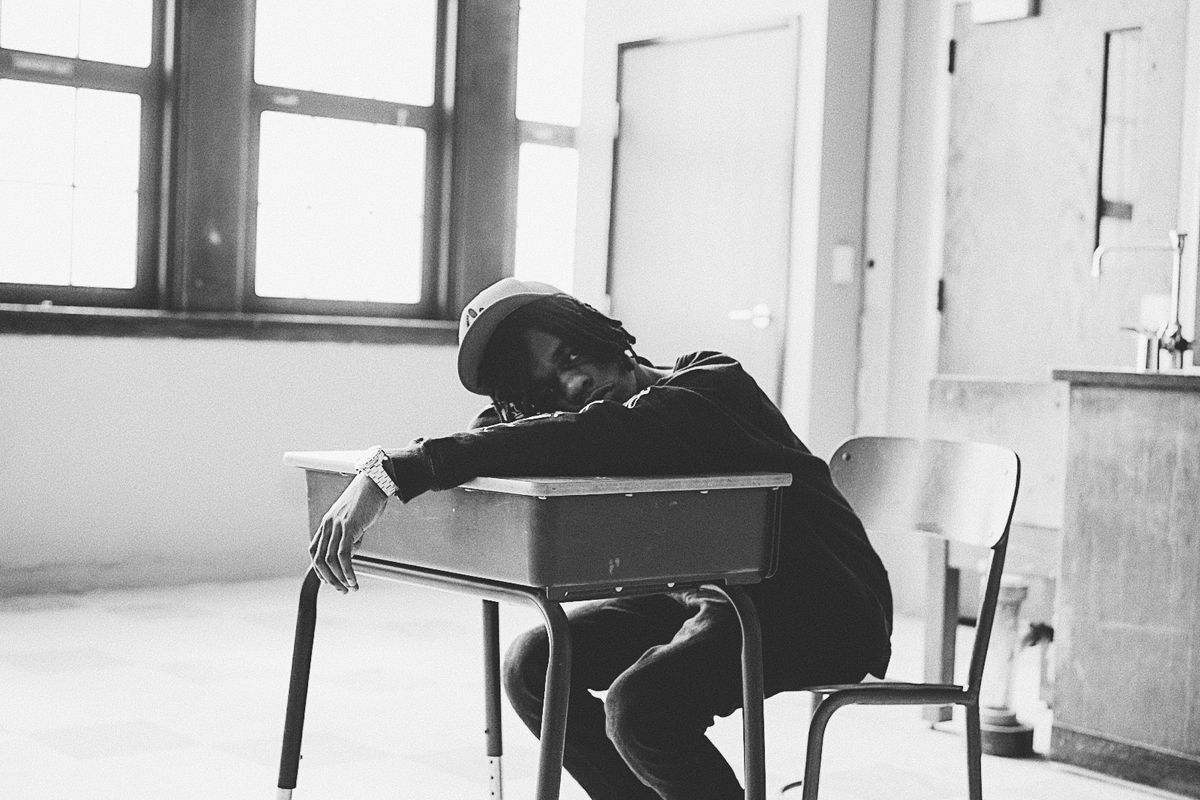 I printed out my record deal contract and sat down at our kitchen table in Detroit with Zoom pulled up on a laptop in front of me. I know you can picture it exactly because you've done the same thing a million times the last few months. It was noon on a Thursday in April, just a few weeks after I'd released my debut full-length project, white ceilings, to an unexpected amount of support from strangers on the internet.

During those weeks, my high school life transformed into what felt like a real life ad campaign for Zoom, where I took call after call with music industry people in-between my school's first awkward attempts at online classes. With a contract sitting on the table in front of me, this moment felt like the climax of those calls. The music execs I felt the most aligned with were all staring back at me from their small computer screen boxes, smoking cigars and toasting drinks.

It might not have been the scene I envisioned for what felt like a life changing moment, but I signed the contract to the sound of applause over shitty laptop speakers, thanked the people on the screen, closed it, walked up to my room and climbed back into bed.

Four months prior in January, after years of pulling beats off YouTube and recording in my basement, I had finally got into a studio with a real producer. In a frenzy of this-my-senior-year, you-can't-fucking-stop-me type energy, I made white ceilings. It was supposed to be the soundtrack of me and all my friends stepping into a future that had no ceiling, and after it dropped that's actually what it felt like for a brief moment.

I turned 18; I found a label bag; I played my first sold-out show; I signed with a booking agent; I told my parents I wasn't going to college; I moved out of their house; I got my own studio equipment; I cut songs to beats by my favorite producers; and people were really fucking with my music all over the world.

And then that world turned upside down (which is actually fucking crazy to think about if you look back at the album art for white ceilings).

I finished high school blanking out during Zoom classes. There was no blowing off classes in the final weeks. There was no prom. No final meetups in smoke-filled basements. I probably missed more, but I literally don't even know what normally happens when you finish high school.

I got a record deal, but there was no going to studios or going on tour. I still haven't met anyone on my team in person. I moved out of my parents' house, but there was no housewarming party in quarantine at the new spot. I turned 18 and tasted the freedom of adulthood, but the daily news cycle reminds me that me and my people are not really free in a country where we can be killed every day. To me, everything just feels stuck in a grey area, right now.

Maybe you've felt that way too since our world turned upside down. Like you're stuck. Like we're all stuck, waiting for something to happen.

If white ceilings was meant to soundtrack the future I was stepping into coming out of high school, grae ceilings captures the extreme range of things I've felt tasting that future and then watching it evaporate into something far less clear.

I'll walk you through the tracklist, below, but follow @whiterosemoxie to watch the grae ceilings short film roll out over the next few weeks and get a look under the covers at the life experiences behind the mixtape.

I was supposed to give a press quote for this and literally all I wanted to say was "500 racks right outta the basement" cause that's the energy of this song. I've been doing this for so long in the basement and this song is about getting the bag and getting out. "Ihop" is the lifestyle now. This isn't the come up, this is the up, at least the up right now with where we're at.

"Kuvaboi" is my reaction to all the media outlets and their good or bad opinions about me. My name is getting out there and people are starting to recognize me in public, a new thing for me that has positives and negatives. I'm appreciative of the attention, but at the same time this song is really about "fuck all the press and exposure and people talking about who I am, and let me just rap for real and show you myself." There is this sort of "loving magazine covers" type energy on the track, but I think you can also hear that I'm conflicted about it all.

I'm actually in the stores now. I'm not just rapping about things I want, I'm actually living this life for real and don't have to break my neck to do it.

If "goo" is about me living flashy and calling attention to it, "other times" is about what happens when people actually look, and the real life mental and physical repercussions of living like that. The jealousy, pressure, danger, coping mechanisms. Just some real city shit. There's just a lot of references to people starting to notice the reality of that city shit in my life, which has started to happen as new people come into the picture.

"Other times" introduces the themes of "higher," and I had to flip this classic to really make the point clear.

I hadn't signed a deal yet, but after all the label offers, I think this is the first song I wrote in my basement the night I decided I was going to sign. I think that's all you need to know to listen and understand the energy of "camcorder." The city can't hold us.

LSD. There's a lot more to this song, but I'm really rapping and you just gotta listen and figure that shit out. Sometimes this shit is more of a feeling than an explanation, but it's all there.

This is the stress of all these changes, the tiredness of coping the way I've been coping, working on music all night, and then waking up in the same apartment i've been trapped in.

I literally made this song after waking up and looking out my window and seeing a protest. This was the peak of the protests in Detroit. People don't realize the effect this shit has had on my generation and people growing up through it. Kids are out here with really formed opinions on this incarceration and police shit, and it's personal for us. It doesn't block me from seeing my blessings, but it certainly makes it misty.

K.M.O on the hook, though. You see some shit on the news ("mist outside"), or dealin with your mama and you just need to go meet up with the crew. "Meetup" isn't the actually the party energy, it's the energy you feel while thinking about the party in your head beforehand. In quarantine, meetups have become an anticipated thing, really only existing in your head for real. The idea of the meetup almost has become the meetup itself.

"Delafayette" is actually the meetup, it's the party. You're not just there, you're there and you're really feeling yourself. But there's tension now in these environments for me. It's not the same party energy as "date night" or "the party" on white ceilings, though. There's a new energy to these things for me now and you hear that on "delafayette" if you're listening. The video we shot for this one goes crazy.

"Kambridge" is the song about me looking back on my city as I prepare to grow beyond it. It's really a deep respect for Detroit type of track. My boy Beno's house is on Cambridge street and that's where Wang came up for real. It's supposed to sound like an underground subway type of record. It feels like the people mover to me, on some Detroit shit.