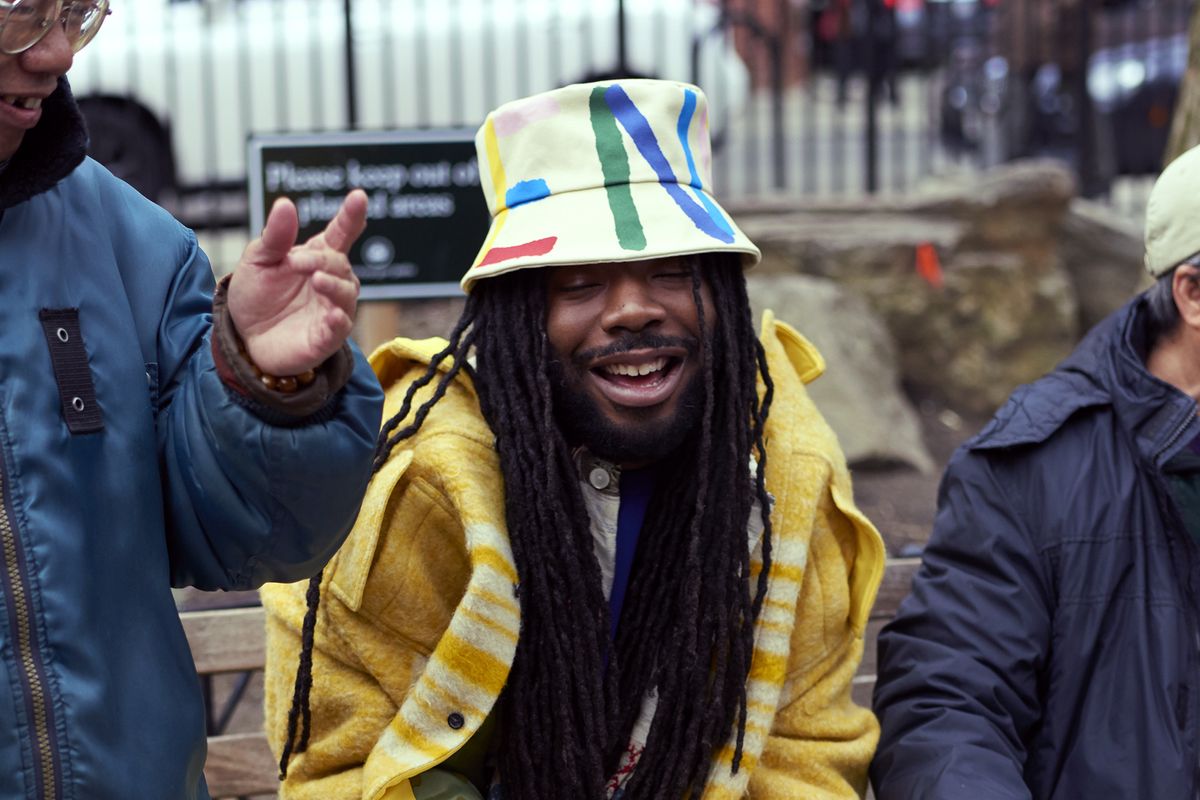 Take it from DRAM.: Big risks can lead to big rewards.

Three years ago, the then 25-year-old aspiring rapper and singer was working as a member of the Geek Squad at a Best Buy outlet in Newport News, Virginia when his manager approached him with an ultimatum after he clashed with other staff members: Quit or be fired. He left and gambled on his music dreams.

Just months earlier, he had met Norfolk, Virginia-based producer Gabe Niles through mutual friends and created "Cha Cha," a song from his 2015 indie debut EP #1Epic. Originally recorded as a sporadic freestyle during a smoke session at his cousin's house, the lighthearted party-starter became a viral hit and subsequently landed him a deal with Atlantic Records. Fans and critics alike soon began to take note of DRAM's perma-grin, long-flowing crown of dreads and feel-good aura. "Everyone saw that we were having such a good time through the music," he says, "and it just built this thing that people wanted to be a part of."

Last year, DRAM released his acclaimed debut album, Big Baby D.R.A.M., which featured "Broccoli," the breakout smash hit with Lil Yachty that's gone five times platinum (and counting) and earned him a Grammy nomination for "Best Rap/Sung Performance." 2017 has seen the artist make his Coachella debut, snag a feature on Gorillaz's new LP Humanz and land a spot as a special guest on Kendrick Lamar's "The Damn. Tour" alongside Travis Scott. But perhaps his biggest project this year is his collaboration with Erykah Badu on an unnamed record that has them "exploring a whole new frequency" and "mixing genres and giving people a good dose of nostalgia." If, in DRAM's words, "2016 was the year of acknowledgement and stamping my name into the game," 2017 "is the year of acceptance." He adds, "It's like this is here to last, here to stay. And we'll make it."

You've only properly been in the music industry for two years now. Do you ever get geeked about your success? Like did you ever think this amount of fame you've reached was accessible?

Yeah, I watched my inspirations, my idols who are like the titans of Virginia in general: Pharrell, The Neptunes, The Clipse, Missy Elliott, Timbaland. They achieved so much. Even on the sports side of things with Allen Iverson and Michael Vick, who are from my side of the woods. Just seeing all of them achieve so much, I was like, "Damn I know I can do it." I always felt like that. But what the shocker is, the thing that nobody knows is, how it happens. The process and the ins and outs of just everyday life.

So, what's the 'how' for you? The one thing that helped you, especially since you've described your hometown of Hampton, Virginia as a place that's not very open-minded?

Just overall the good vibes. When I came into the game I brought a refreshing new sound that was untapped. Me and my boy Gabe, my producer on a lot of records of mine like "Cha Cha," we were making this music back at home just off the strength of wanting to spread good vibes. When we go out we like to have a good time. We like to party; we like to drink. We like to get with the ladies. Where I'm from, north of Virginia Beach, certain shit just isn't going down, but I embraced it and made music off of life and what I was going through. I had a really, really great time year in 2014 [and you can hear that in #1Epic]. Everyone saw that we were having such a good time through the music, and I think it just built this thing that people want to be a part of.

If you could break your life up into chapters up until this point, what would you title them?

2016 was the year of acknowledgement and stamping my name into the game. And 2017 is the year of acceptance. It's like this is here to last, here to stay. And we'll make it. I love the way everything is going.

You said 2017 is the year of acceptance. Do you feel like people didn't understand you when you first came out, maybe even still?

Yeah, still now to this day. But that's what I thrive off of. Ever since I was a child, the element of surprise is always more of a warning, especially when it's a pleasant surprise. To be a pleasant surprise is worth it sometimes, you know. For somebody to sleep and then when they wake up it's like, that's all they want to stay up and talk about. Then they want to tell other people to wake up.

You bring up good vibes a lot, and it's unlike many of your peers, your music has a more joyful tone. Do you feel like in your own small way, you're trying to make the world a better place with your music?

Wow! I never think into it that deep. That's when I think it becomes un-pure, when you're doing it for your own agenda. Just make whatever feels good to you; make whatever feels right to you. But I'm so grateful that people consider my music a good thing.

What do you think is like the biggest lesson you've learned thus far?

Never take anything for granted and give it all you got because just as fast as it came, it can go even quicker. And no matter what kind of day you're having, I mean, I preach this all day, 24/7, but even if you're personally having a shitty day, when you go out and you do your thing, or you go out and step into the world, still try to portray that good energy. You got to give out the good vibes. Nine times out of ten, they come back to you, and you end up falling into a blessing that was already meant for you. You just had to chill out and be able to receive it.

Is there anything that keeps you grounded in particular?

Yeah, just knowing where I came from, knowing what I had to go through earlier in my adulthood. See, I'm 28. I'll be 29 on August 3rd. So I've had some years as an adult in just a regular society, being broke as fuck, doing whatever just to make means, having little on and off jobs. Fun fact: I've been fired from every single job I had except Best Buy, my last job. They gave me an ultimatum and said either quit or we fire you. But by that time I had to leave for a week to go to New York for the CMJ Music Marathon. They didn't want to fucking believe that I was doing this, but I was like, "it's cool. It's fine. I always, always wanted to do my music so that's what I'm going to do." I was always in the cut with my headphones on, making my own beats, recording on a hundred-dollar mic. I just knew I wanted to do it. I didn't give a fuck if anybody thought it was a hobby. I didn't give a fuck if anybody thought that I was aiming for nothing. I knew.

How do you see yourself evolving musically? I know it's hard sometimes to talk about the future, but if you had to foresee...

Oh my God. Nah, I mean, for real, my name is Shelly and I'm just living life day by day like everyone else, I find new stories and new things. All I'm going to do is just continue to reflect off of life, what I go through and the things that are around me. I want to refine my sound as I go on, too, because practice makes perfect.

Be on the look out for the project from myself and Erykah Badu. We're exploring a whole new frequency. It's a flirt with sounds and topics. We're just mixing genres and giving people a good dose of nostalgia. There's going to be more music, more shows, more of Big Baby as a household name, a brand, and an entity this year, too.

Styling by Fatima B. for No-NameManagement.com
Grooming by Daniel Avilan at Wilhelmina Artists using MAC Cosmetics