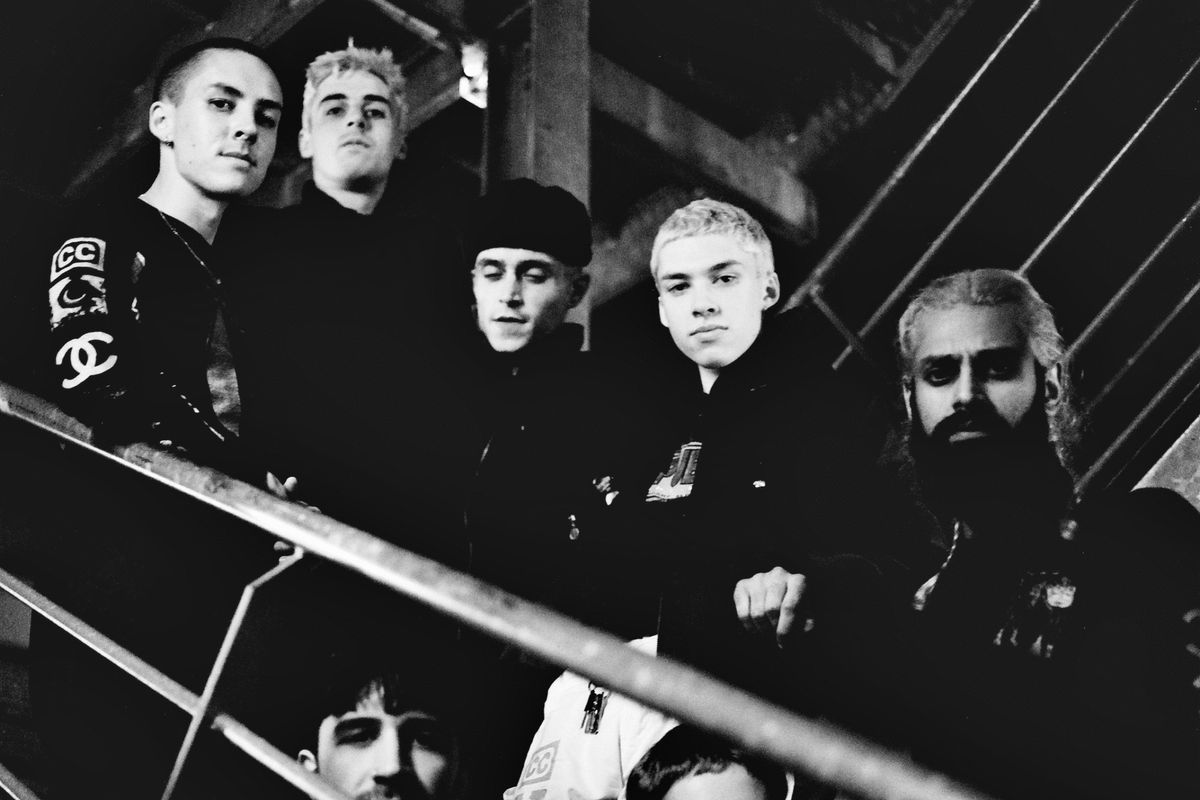 At Hedi Slimane's inaugural menswear Paris fashion week show for Celine, his vision for menswear transported us into 1970's England. He sampled from the aesthetics of the period's youth subcultures, spanning those of post-punk degenerates to dapper teddy boys. Bowl cuts, mullets, tweed bombers, skinny ties, leopard-print, single earrings and leather jackets abounded. White socks peeked out from under shortened trousers and skinny leather pants. A touch of preppy plaids and houndstooth rounded out the Brit spirit. Billy Elliot, David Bowie, Michael Jackson and Richard Hell all could have found something to like in the line.

To heighten the mood, Slimane recruited Vancouver-based punk collective Crack Cloud to compose, record and produce the score, which was punctuated by an solo from 1970's legendary no wave saxophonist James Chance.

As a band, Crack Cloud operates as a seven-piece, but as a collective they're a rehabilitation-focused community for a revolving troop of musicians, filmmakers and designers, who use music and visual art-making as therapy for addiction. They've gained an audience in punk and experimental circles their dense lyricism and strange, groovy sound which reflects new wave, post-punk and hip-hop, and draws on artists and writers like Gang of Four, Talking Heads, Fela Kuti, and Lydia Lunch and Malcolm X.

It seems like an unusual pairing, given both couture's penchant for nostalgic hits or flavorless house as runway show's sonic component, and the Crack Cloud's counter-cultural ethic. Celine is a luxury brand, after all and in some ways the two creative entities seem fundamentally contradictory. But Slimane's narrative for this show, which pays homage to the ways that misfits and weirdos and visionaries have created identity out of fashion, somehow seemed to call for energy of an experimental multimedia punk collective from Canada.

So how the hell did world-famous designer Hedi Slimane find out about such a left-field act? Coincidence, of course.

"We met Lotte Selwood [former Saint Laurent accessories designer] this past November at the Moth Club in London. We kept a conversation going and it eventually developed into the prospect of scoring for the Men's showcase" explains the band.

Something about the Crack Cloud's sound and ethic resonated with Slimane, though the band doesn't even fully understood the chemistry: "I'm not sure why they felt our aesthetic worked so well for their brand. We are punks but we are pragmatic; Hedi appears to have a similar focus."

At the Slimane's request, Crack Cloud did a full-rework of their nervy, hypnotic new wave track "Philosopher's Calling" — the staccato droning, tongue-in-cheek monologue and squiggly guitars more than a little reminiscent of Devo and The Talking Heads — into runway-show length epic. It flooded the runway as the Brit boys scowled and strutted around, highlighting the biting cool and brazen impertinence of their looks.

As far as the creative process, the creation of the soundtrack was about as discordant as you'd imagine a collaboration between a DIY collective and a luxury brand, operating by the global fashion industry calendar and protocol, would be.

"Communication was fast paced, revisions were plenty, and the deadlines abrupt. Having to forfeit creative control over our composition fostered resentment in us during the process…" says Crack Cloud.

But in the end, the unlikely collaborators found compromise, and maybe even synergy.

"In retrospect it became a very fulfilling exercise. As a collective we are used to communicating with our own language of abstraction to see a concept through. Having to interpret and reconcile with Celine's own language proved creatively demanding in its own right, and we're better for it as artists."