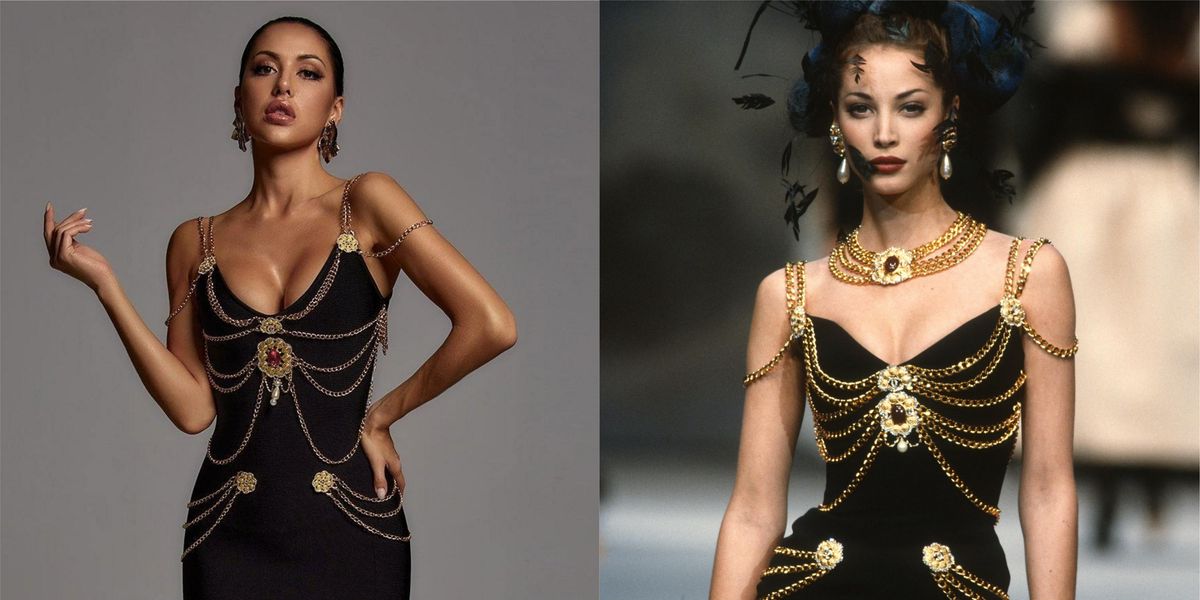 An online women's fast fashion retailer called Bella Barnett is making the rounds on social media today after users drew attention to one of its dresses for sale: a metal embellishment maxi dress (going for $108) that looks like a carbon copy of a vintage Chanel Haute Couture dress worn originally by Christy Turlington.

Between the placement of the curved chains and jewel embellishments, it wasn't difficult for users to spot the original source material. While general Twitter reactions range from outrage ("the audacity," "i would sue") to indifference ("Chanel will be fine," "I would care if they copied a smaller designer"), it's not the first time the original gown has resurfaced in pop culture since its runway debut in 1992.

Model and actor Lily Rose-Depp wore the dress to the 2019 Met Gala (sans choker and cuffs), and Chanel supplied Penélope Cruz the same gown ten years earlier for a memorable scene in the Spanish film Broken Embraces. It also appeared on manga character Sailor Pluto in a 1996 illustration drawn by Naoko Takeuchi.

See, below, for more reactions to the Bella Barnett dress.

It is so shameful and embarrassing that companies get away with blatantly copying the design of others and profitin… https://t.co/xJqvBDpNbx
— Amour (@Amour)1629125068.0

These companies are getting out of control! Like seriously? Lol https://t.co/cWBUDP6IUE
— ideservecouture (@ideservecouture)1629212354.0

haute couture especially archive are literally meant to be copied please its not like they're pretending to be orig… https://t.co/vmbEQuIpKR
— ziyad (@ziyad)1629205086.0

Photo courtesy of Bella Barnett and via Getty