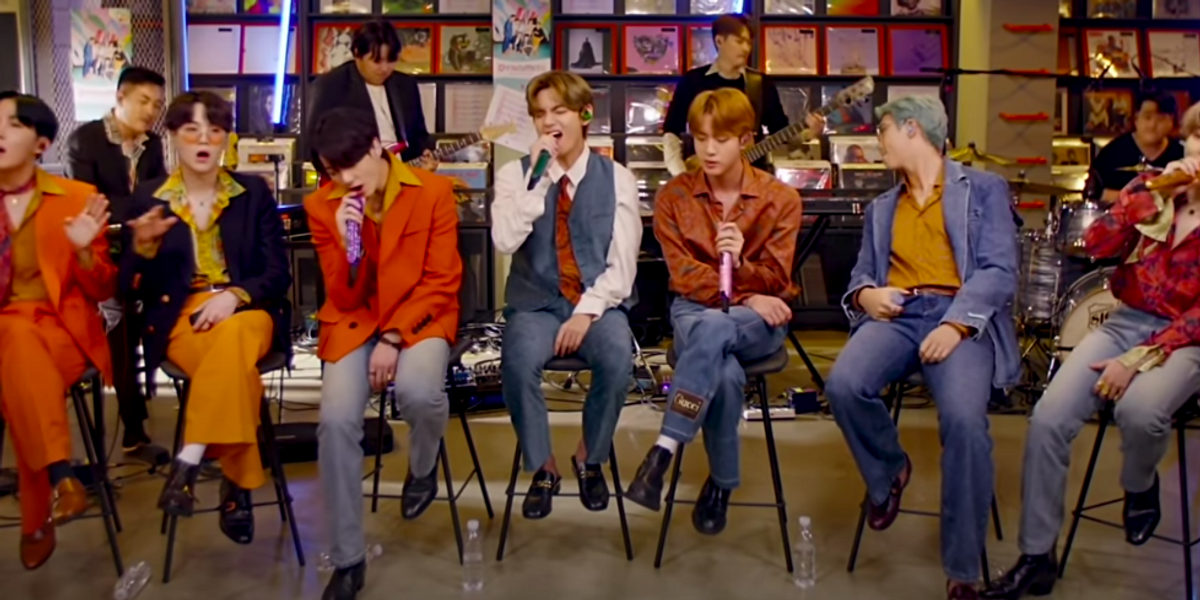 For the first time ever, BTS performed for NPR's Tiny Desk (Home) concert series. Comfy from Seoul, the septet made up of RM, Jin, Suga, J-Hope, Jimin, V and Jungkook, performed "Dynamite," "Save Me" and "Spring Day" in a record store setting at VINYL & Plastic by Hyundai Card.

It's no secret that when BTS shows up to anything, they show out, visually and vocally. But since it's the Tiny Desk series that's not about intricate routines and exciting flourishes of energy; the group pared down the show to a simple, feel-good performance in a set of chairs.

Wearing the colors that signify that fall is finally here, the septet kicked off the fun by bouncing their bodies to "Dynamite" as they sang their most recent single that became their first No. 1 debut on the Billboard Hot 100.

After bringing the energy in the room to a boiling point, the group introduced itself and explained that it wanted to share that great energy with everyone around the world. Then they launched into their 2016 single, "Save Me." It packs a much softer energy than "Dynamite" and it could be felt with them mostly staying seated as they played it.

Their final selection was another 2016 song, "Spring Day," which RM introduced with some poignant words for this rough patch that the world is in: "It's been the roughest summer ever, but we know that spring will come." Their stirring performance capped off the show as nothing short of legendary.

If you can't get enough of your BTS fix, there's good news. From Sept. 28 through Oct. 2, BTS will be hosting a week-long takeover of the Tonight Show and will have a unique performance every night as well as skits with host Jimmy Fallon.

"We love having BTS on the show. These guys are incredible, and you just know they're going to go above and beyond to make their performance unforgettable," said Fallon in a statement.