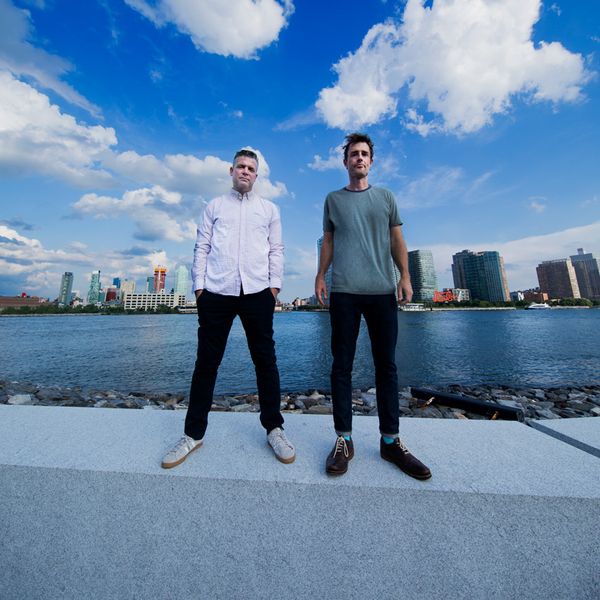 Battles Is Fine With Still Figuring it Out

In the nearly two decades since their formation, Battles has taken many forms.

Originally starting out as a four-piece, lead singer Tyondai Braxton left the band after their first album, which led Battles to experiment with a variety of guest vocalists on their sophomore effort, Gloss Drop. From there, Battles stripped back their sound to a glitchy minimalism on 2015's La Di Da Di before finding themselves downsizing once again with the departure of guitarist/bassist David Konopka.

As a duo, Battles once again faced the dilemma of figuring out how to do more with less, and when their label came knocking somehow pulled a new album from the turmoil.

The result is Juice B Crypts, a record that doesn't shy away from brightly colored maximalism and pushes the genre of math rock to its most chaotic, cluttered extreme. In a word, Juice B Crypts is dense. Full of intricate melodies and drum patterns that interlock with one another like an elaborate puzzle box being undone, the album moves at a blisteringly fast pace.

From Sal Principato's shouts on "Titanium 2 Step" to Prairie WWWW's possessed incantations on "Sugar Foot" and even the reptilian undulations on "Izm," the album's best moments come from its strangest. One of its quieter, more pensive moments, "Fort Greene Park" is easily the project's most stunning.

In some respects, Juice B Crypts is a transitional album for the band, but given their history the same could be said for every Battles album. Instead of dwelling on the past, guitarist/keyboardist Ian Williams and drummer John Stainer are embracing the creative freedom that being a duo affords them.

PAPER sat down with the pair to chat the band's evolution, the process of writing Juice B Crypts, and where Battles goes from here.

How did Juice B Crypts come about?

John Stainer: We took a really long time off, probably way too much time, and then the label was asking, "What's happening?" We all of a sudden became a duo, but we didn't let that stop us in any way and [the album process] took about a year, which is pretty quick for us, ironically.

How has losing a member changed your process?

John: We lost a member so out of the blue and it was so definite that we didn't even have time to sit down and discuss whether or not we're going to be able to pull this off. The next day literally it was, "Let's just start writing and worry about how to play this stuff live later." It was about never really looking back.

Ian: I feel like it could become more focused because our process has always been non-hierarchical. There wasn't a band leader who made the decisions. Everybody had to be into a song and that kind of process works at first, but eventually, it's just the old saying that you're trying to please everybody, so you end up unhappy... creating the most average thing ever.

What surprised you about going around this time?

John: We were able to adapt ideas at the snap of a finger. With the tools that we were using, we could see what happens if we take this idea from this universe and throw it into this. Whereas before everyone's always fighting for musical real estate. It's just this huge chain reaction of all these weird rules and obstacles. There's none of that this time. I feel like the ideas flowed a thousand times faster. Also, there's only two of us, so there wasn't many arguments or doubtfulness. It's either going to work or it's not going to work.

Ian: We're somewhat of an organic rock band, but at the same time, we're an electronic duo. It's a lot easier to get tight coordination over when I can control all the different loops going on. If you go back to when I lived in Chicago in the '90s, in my old band the other guitarists quit and I became the only guitarist. I got a loop pedal where you can play a riff and then you add a riff on top of that and stack all these riffs, but it still sounds like it was coming out of one guitar amplifier. I still have this inspiration of what would happen if you took apart those layers of one loop and spread out the lines among multiple guitarists and musicians. If you look back in the early days, that's what we were doing: You'e trading lines, unpacking a loop. Eventually everybody just got their own loop pedal and started building their own loops. It became this traffic jam of loops, which was sort of antithetical to how the band began.

That's a perfect segue into "A Loop So Nice.../They Played It Twice."

John: It was one song that we cut in half, but they each have their own totally separate lives. We wanted people to know that it's not necessarily part one and part two. There is a tiny correlation, but I didn't want them to be like the second song sounds exactly like the first one. You have to hint it's a repetition.

Ian: The background of that song is that it is the exact same bed, but the interesting thing was creating an entirely different song using the same bed.

Throughout this album there's this frenetic energy. What is your attraction to the fast melodies and patterns you use?

John: I'd have to go to a therapist to answer that.

Ian: If I had to choose between playing fast and very slow I'd always go fast. [John] has hardcore roots. Fast is more fun. Slow is been there, done that, boring. Slow is the '90s. Look at the times we live in now, there's no time to look at everything. It's fast fast fast fast. You have to post that picture on Instagram and hashtag the right words.

It does have this feeling of information overload.

How did you approach working with vocalists on this album as opposed to previous ones?

John: All of the vocalists, we had some sort of connection to. It was a phone call away from us.

Ian: It's hard because half the time we are this instrumental band and there is an expectation to be a virtuoso or do some epic space movie soundtrack that takes you places. Sometimes our stuff hints at those things, but you don't want the pressure to have to do that.

John: Yeah, that's not our shtick.

Ian: If those things happen they happen, but we're not out to impress.

John: The weird thing is that 100% electronic music can get away with minimalist instrumental music, but the second there's an instrument within the group it's like all the rules change. Suddenly it's just a rock band trying get away with techno and it doesn't work for whatever reason. The audience won't let it work, I don't know why that is but they expect more. They're not just looking at a DJ and losing themselves to the music.

How are you adapting the album for a live performance?

John: My recollection of history is you have a Nirvana moment, then you cross over, then it's like, "You're a sell out! No, you're not!" That whole conversation. Then in the 2000s it became, "Oh, who cares." And because of the internet, divisions between overground and underground became much blurrier. The cultural divisions are mashed together a lot more. Our record now has to compete for the world's attention with not only everybody else's record coming out, but all the records in history.

A record store is like a finite index, whereas now you have everything at your fingertips.

John: Now it's this ocean. Which, again, blurs scenes. Everything is just playlists.

Ian: There's definitely been a rate of acceleration. The lifespan, I feel like, of a song has drastically shortened.

John: I don't refer to the '90s as the good old days at all. There were some great things about it, but the music industry is so much better right now than it was in the '90s. It sucked. You were just slave to radio and MTV — especially radio. Now I guess radio is still important, but there are so many other options that it doesn't really matter.

Now, there are underground artists who operate in a mainstream way and there are mainstream artists that operate in an underground way. It's all become very interchangeable. But I'm interested in knowing who are the people that you look to today like, "Oh, they're doing something interesting."

John: I really like Prairie WWWW, who's on our record. They played with us twice in Taipei and they're really cool. I am really happy that they were able to be a part of our record. In a really weird way, I seriously had that feeling, "Here's something super '90s," where you would discover this band and you totally did not want them to become popular. I literally felt like that with them. I didn't want to spread the gospel of Prairie.

Ian: John's mad that they're on our record.

John: The floodgates have opened. But no, good for them. They're really good people. That's just one example.

Outside of music, what do you guys get up to?

John: This is it.

Ian: It depends what the director's asking for, it's pretty inspirational.

Ian: The stacking. I like getting technical in my analysis of music, with the chords and stuff. The robes are very nice.

John: I hate to say it but right now, there's no time for anything else. It went from quiet, calm before the storm to a full-time, 24-hour job. I've gotten more emails a day in the last two months than I have in years.

Ian: Let me tell you a thing about email, because it became a big thing. I wanted to avoid email in a weird way, but I realized I had to get on board. I've had an email account since the '90s. The modern office worker just basically sits and works email, right? Sending messages, they're getting messages. I never had that because I managed to mostly play music. Now when you play music, people still want things from you. Things are much more professional, even if you're in a small band. Nobody wants GG Allen in the mix. Everyone's sitting on their laptops thinking about how to monetize.

What do you envision the future of Battles being?

John: To be honest, that question is difficult for us to answer right now because the situation that was thrown upon us, we've just been taking baby steps. It's one thing at a time. First, we're going to write the record, then we're going to worry about how to play it live. As far as what's the big plan for Battles, I have no idea.