Is New York Finally Getting the Techno Club It Deserves?

by Michelle Lhooq
Paper Magazine
10 May 2019

"Sorry, we haven't slept much," apologizes Tea Abashidze when we meet in a parking lot in Maspeth, Queens on a bright May afternoon. Abashidze and her partner GeGa Japaridze, both dressed stylishly in head-to-toe black, have emerged from the bowels of their new subterranean venue Basement, which is housed underneath the 50,000-square-foot music and arts venue Knockdown Center. Blinking in the sunlight, they squint at a cluster of shrink-wrapped boxes in a corner of the lot — the club's Funktion One soundsystem has just been delivered and needs to be installed. Opening night is four days away, and clearly, they've got their work cut out for them.

Basement, which opens tonight, will be New York's first club dedicated to techno — a genre of electronic music born in mid-80s Detroit known for its driving 4x4 rhythms and hard-hitting, multi-textured drum kicks. The club arrives at an opportune time: Underground dance music in New York is currently thriving on an unprecedented level, and there is no doubt that techno is the bloodline that connects the sprawling scene. In the past couple years, scores of new music venues and bars have been springing up all over the city; at the same time, many cherished DIY spaces have been forced to close. New York nightlife has therefore moved almost completely into legally sanctioned venues, but there has not been a single club dedicated specifically to techno — until now.

Even though the stage is set for its success, Basement has already attracted a fair share of criticism and eyerolls. When the club's initial DJ lineup poster dropped earlier this year, I tweeted, tongue placed firmly in cheek, that this could be "our Berghain," and the reactions were divisive. Some people scoffed that their monochromatic visuals and minimalist typeface looked like a cloying imitation of Resident Advisor and Berghain's aesthetics. More glaringly, the first-wave lineup was overwhelmingly white, with very few DJs of color — an oversight that many were quick to point out. (The club has since released an expanded lineup that corrects this issue). While there is no doubt that New York nightlife is on the brink of explosion, it's not clear yet if Basement is the club we've been waiting for.

Beckoning for me to follow, Abashidze and Japaridze head into the club's striking entrance — a long, grey concrete tunnel leading to a low-ceilinged, subterranean chamber where workers are busy drilling and pounding all kinds of industrial fixtures together. The floors are covered in dust, the DJ booth has not yet been installed, and there is little to suggest that this bare-boned, 500-capacity room will soon turn into a party paradise. Yet, the potential is obvious: this is one of the most striking spaces I've ever seen for a nightclub. There is a palpable sense of history in these hand-laid brick walls, which date back more than a hundred years to when the building was used as a glass and steel-frame door factory. A labyrinth of shadowy nooks and crannies around every corner — perfect for debaucherous nighttime activities — lend an extra layer of mystery. Even the heavy metal doors look straight out of a Game of Thrones prison.

Knockdown Center has been one of the most interesting cultural venues in New York ever since it opened in 2012 — it has staged more than 150 art exhibitions and shows of all stripes, ranging from immersive performance art to book fairs, square dancing nights to after-school programs. Opening a techno club in the basement, Knockdown Center director Tyler Myers tells me, has been two years in the making, and was only possible after earning the trust of their neighbors. "We've been here for five years and are doing better financially and politically," says Myers. "There was fear from the neighborhood, and we worked hard to be part of the community. Now people know us, and can call or text me, so they feel like they're in the loop and it's not as scary."

The Basement team leads me to one of several backstage rooms, where we sit down in mismatched furniture and sip water. Abashidze and Japaridze tell me they moved to New York five years ago from Georgia, a pivotal country in the Eastern European rave scene. They started out booking techno nights at Output and Elsewhere, before landing their current gig as bookers at Basement. "I really don't want to compare this venue to any other clubs," Abashidze says. "I think we're doing something completely different based on the New York scene. But music wise, of course we'll have many similar artists because it's all techno."

Doesn't New York techno have a distinctive sound? I ask, thinking about artists like Shyboi — who plays brutally hard and fast sets that leap across genres like hopscotch. "New York's techno is kinda unique, and so is Europe's, but both of them have parts of each other," Abashidze replies. "What we want to have here is the New York sound, Chicago sound, Detroit sound, and Berlin sound — we want to have everything together."

I finally bring up the elephant in the room: their initial, too-white DJ lineup. "That's not true, because at the time, we didn't have signed contracts with all the talents," says Japaridze, explaining that they were only able to announce a small portion of the full lineup during the first round. Myers, on the other hand, is less defensive. "It's true that I didn't realize how it would look when we launched, and that list as a snapshot missed the mark," he says. "That's something we thought hard before we published a fuller list for June shows. It was disappointing and embarrassing. We will be better, because it's important to have diversity in programming."

BASEMENT on Instagram: “Opening weekend // Online tickets are sold out for both nights. A few will be available at the door.”

Going forward, Basement's lineups will be centered on local talent, as well as bringing in international artists who've never played in New York before. The club will soon launch a podcast and workshop series, and in the fall, will open a second room for house music. In order to keep the focus on music, they will have a door policy where revelers who don't know which DJs are headlining and are simply trying to have a good time will be turned away. "You have to do your homework," Japaridze says. "We won't be declining people because you're wearing red or purple [instead of black], but if you don't know who is playing at all..."

It's getting late and the crew clearly has a lot ore to do, so I decide to ask my final question: given the gritty vibe of the venue, its industrial-strength music, and the space's ripe potential for wonton debauchery, is New York ready for the kind of brutally crazy (and potentially druggie) club not seen in this city since the '90s? Everyone laughs. "I think New York is ready for a techno club," says Abashidze. Nothing could be more true. Here's hoping they don't fuck it up. 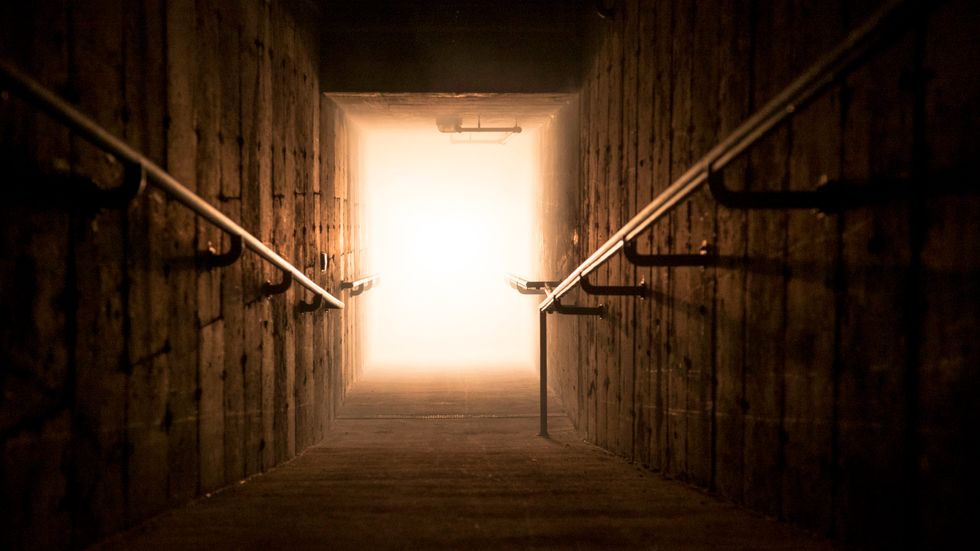