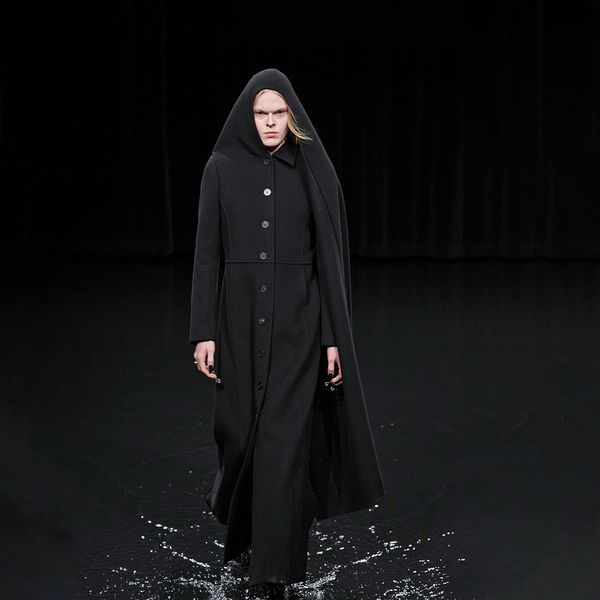 There Was No Escaping Our Planet's Demise at Balenciaga

The mood was unsettling, to say the least, at Balenciaga's Fall 2020 show this weekend. Between the rows of seats submerged in water and the ceiling projections depicting blue skies that turned into stormy clouds and eventually a fiery hell, you couldn't ignore the show's apocalyptic feel.

Designers have dabbled with climate change references before, particularly this season. But Balenciaga's literal interpretations of a bleak and uncertain future gave the clothes a powerful, menacing tone that struck an emotional chord in these despondent times.

The somber effect was felt early on in the collection, with a mostly all-black lineup of floor-sweeping robes and monastic garb that conjured ideas of religious dressing (another burgeoning trend this season.) Eventually the modest clothes gave way to seemingly random references like motocross and soccer before culminating with elegant bias-cut dresses in primary colors.

Demna Gvasalia, the brand's creative director, confirmed the melancholic mood was intentional. "I just wanted something quite emotionally triggering and quite sad, and I thought about flood," he told WWD. "In general, the consequences of our lifestyle — flood is kind of a metaphoric thing."

See, below, to watch the Balenciaga Fall 2020 show.